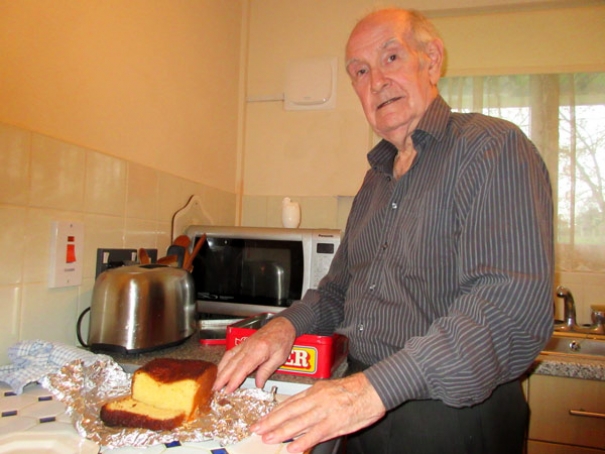 George O’Connor ready with a slice of lemon cake to go with his afternoon cup of tea
Celebrations for the Queen’s Sapphire Jubilee, marking her 65 years on the throne, brought back fond memories for former Buckingham Palace pastry chef, George O’Connor, who lives in sheltered housing in Barnet.

Mr O’Connor, who at 85 still bakes a lemon cake every other week, was guarded when interviewed by the Barnet Society: “I had to sign the Official Secrets Act, and that lasts a lifetime, you know.”

But when reminded that the Queen’s choice of cakes and pastries was hardly an official secret, he did suggest what he thought would probably have been the royal preference for such an important celebration.

“I definitely think she would have liked a light fruit cake, with just a thin layer of icing on top; that would have gone very nicely with a good cup of tea!”

Mr O’Connor rose to become the assistant banqueting manager at the Palace before retiring in the late 1990s. Prior to that he had been a cook at the Foreign and Commonwealth Office.

“One day I was told that I had been recommended for another job. I was collected in a Rolls Royce and taken from the Foreign Office to the Palace and interviewed by the Sergeant at Arms for the vacancy of pastry chef at the Palace.

“I can only imagine that one of the Foreign Secretaries must have liked my cakes. One day, when President Clinton visited the Foreign Office, I had to prepare afternoon tea. The security team checked me out – and the tray of tea and cakes – and then I was allowed to serve them to President Clinton.”

Mr O’Connor is still a prolific cake maker. As well as producing a lemon cake every other week – “I always have one in the house” – he often bakes a never-failed fruit cake, a pineapple cake and a cherry and walnut cake.

After his retirement, he lived in sheltered housing in Mill Hill, before moving to Mayhill Road. When his health was better and he attended a day centre at Edgware, he regularly baked Christmas cakes in the centre’s kitchen.

One year I did 26 8-inch Christmas cakes and 20 4-inch cakes, and they all sold out straight away at the Christmas bazaar, making £96 for the day centre.

Before becoming a cook and pastry chef, Mr O’Connor was a chauffeur for wealthy families. He got to know housekeeping side of the business and sometimes helped out.

His most surprising engagement was helping the housekeeper at Peter Sellers’ house in Godalming, shortly after he married Britt Ekland.

“One day Princess Margaret and Anthony Armstrong-Jones came to dinner and I was asked to serve them. When Lord Snowdon asked for another cup of coffee we were in trouble: we had run out of coffee and the kitchen had to use Nescafe. But Lord Snowdon told me he had never tasted such a good cup of coffee. Needless to say, I didn't let on.”

More in this category: « Theresa Villiers MP under fire Petticoats and poetry »