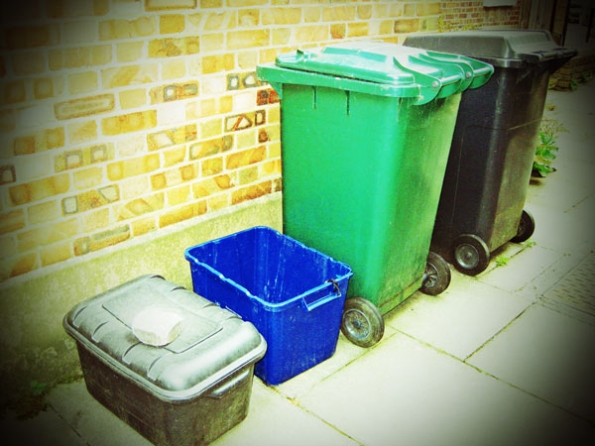 Multiplying Wheelie Bins
Barnet residents are about to face what looks like becoming a game of musical chairs among the wheelie bins and containers which proliferate in the frontages of houses and flats across the borough. Out go the black and blue recycling boxes . . . to be replaced as from October 14 by a blue wheelie bin for all recyclable material.

All households will retain the existing black wheelie bin for refuse and a green wheelie bin for green garden waste and in addition will be issued with a small waste-food caddy for use in the kitchen and a separate food waste bin to be kept outside.

For residents of smaller properties, trying to find space for yet another metre high wheelie bin, together with a separate food waste bin, is likely to be a daunting prospect.  Barnet Council’s assertion that this will make it “easier” for all concerned will be of little comfort to those householders who already find it difficult to deal with three or four waste containers but must now get used to having to contend with up to five.

The one great advantage of having “a 240-litre blue wheeled bin” – instead of two recycling boxes – is that it will take many more types of material and householders will no longer to have to separate out newspapers and cardboard from glass, cans, tins and plastic bottles.

By providing one blue wheelie bin for all recyclables the council
hopes to address one of the biggest complaints of Barnet residents.

Perhaps of even greater impact will be the introduction of a service for collecting food waste.  Each household will be issued with a new seven-litre food caddy for the kitchen and a twenty-three-litre food-waste bin to be kept outdoors.

Vegetable peelings, leftovers and food remains that are collected in the kitchen caddy can then be emptied into the food-waste bin, which can be secured with a lockable lid and will be collected weekly.

Initially each household will be provided with a sample of ten compostable liners for the food-waste caddy; Barnet Council says these are widely available and can be purchased at most supermarkets and hardware stores.

Full details of the new waste and recycling services are available at www.barnet.gov.uk/14-october where there is an explanation of the reasons why the council hopes that the borough can double the amount of household waste that is recycled, composted or reused.

In future all waste and recycling collections will be carried out directly by the borough following a decision to take the recycling service, currently provided by May Gurney, back under council control; a new fleet of recycling trucks has already been delivered.

Refuse, recyclables and food waste will all be collected on the same day each week, but there will be a fortnightly collection of green garden waste.

At present 30 per cent of refuse is food waste and by collecting it separately the council hopes to cut the cost of refuse disposal by reducing the tax that has to be paid on landfill.

Once food waste is collected separately, garden waste – which makes up most of the organic matter disposed of in green bins – can be collected on a fortnightly basis and processed in an outdoor facility at significantly lower cost.

By providing one blue wheelie bin for all recyclables the council hopes to address one of the biggest complaints of Barnet residents.  Sorting out material into two recycling boxes was found to be “difficult and confusing”, and collecting everything together in one bin – together with plastic packaging – should be “easier and quicker”.

Richard Cornelius, leader of Barnet Council, accepts that the changeover in October will be stressful for some households but by reducing costs and recycling more it should be possible to retain weekly collections.

“We seem to have reached the limit on what can be done with the little boxes.  The idea is that the new blue bin will take all the recycling and then be sorted in a factory.

“This will be easier for residents and for collection. We will be able to have just the one fleet of dustcarts and get rid of the box trucks with holes in their sides.  This is another saving.”