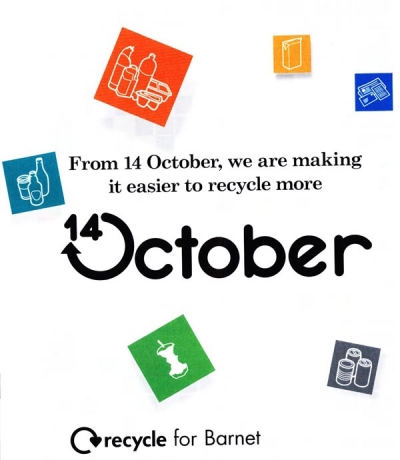 Barnet Recycling
North London’s much-troubled plan for handling municipal rubbish and waste is out for consultations once again.

Residents of Barnet and six other North London boroughs have until June 7 2013 to make representations via the “Have Your Say” section of the North London Waste Authority’s website (www.nlwp.net) or at This email address is being protected from spambots. You need JavaScript enabled to view it.

The plan – which will provide a planning framework for waste management until 2027 – is having to be prepared again because a public hearing in June 2012 into the previous proposals had to be halted on the very first day of the inquiry after a planning inspector ruled that the seven London boroughs had failed to comply with the procedures for co-operating with the local authorities which receive waste for landfill from North London.

One issue of possible concern for the outer London boroughs – and especially in areas such as Mill Hill, Totteridge, Chipping Barnet, Hadley and New Barnet – is whether land in or around the green belt might be earmarked for waste management processes.

Under the previous North Waste London Plan, which covers Barnet, Camden, Enfield, Hackney Haringey, Islington and Waltham Forest Councils, the only local change was a proposal for a new waste transfer station at Cricklewood. Proposals in the previous plan – and any comments by the planning inspector – will be taken into account in the preparation of the new plan which should be produced sometime in 2014 and which will “explain how planning applications for waste facilities in the boroughs will be decided and will identify enough sites for waste management.”

But the re-assessment of the plan will have to take account of changing waste management requirements in the seven boroughs and Archie Onslow, programme manager for the waste plan, says this may require a wider update of the original proposals.

“We may well be assembling a new list of sites – some of the old ones may need to drop out because they have been developed, others new to the North London Waste Plan, may be nominated or become available.” Currently the seven North London boroughs collect nearly a million tonnes of rubbish a year from homes and some businesses – roughly a tonne per household per year. Building sites, hospitals and businesses generate three million tonnes a year.

Half the municipal household waste and a quarter of the business waste goes to landfill sites outside London. The main transfer stations, where waste is deposited before being transported by road or rail, are in Islington, Hendon, Edmonton and Enfield.

But the North London Waste Authority says this practice cannot continue and the boroughs must reduce the amount of rubbish being produced, recycle more and find other alternative ways of treating waste.

The Edmonton incinerator – which took 36 per cent of North London’s waste in 2010 – is currently generating sufficient electricity to meet the needs of 24,000 households and since 2005 the Edmonton site, officially known as the London EcoPark, has also included a composting facility which takes 30,000 tonnes of green and kitchen waste each year. In order to meet government targets the priority for all seven boroughs is to recycle and compost 45 per cent of municipal waste by 2015.

To help meet the target Barnet Council is introducing changes to waste collection as from October 14 2013. From then on, recyclables, including paper, cardboard, cartons, food tins and drink cans, plastic bottles, glass bottles and jars can be mixed together and placed a single bin; food and green waste will continue to be collected separately.

Details of the changes will be sent to Barnet residents shortly and the Council says the new service could achieve 43 per cent recycling by 2016-17 compared with a 31 per cent rate if the current system was allowed to continue.