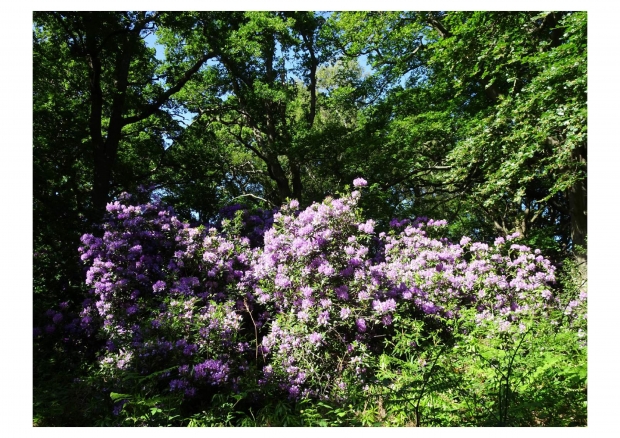 Barnet Gate Wood is one of Chipping Barnet’s extraordinary but under-visited green assets – and if you go now you’ll find an incredible froth of purple rhododendron bloom.

Barnet Gate Wood is an ancient wood in Arkley, just south of Barnet Road and west of Hendon Wood Lane. It’s owned and managed by Barnet Council and is open all year-round, but perhaps because it’s hidden from the road it attracts relatively few walkers and naturalists.

That’s a shame, because its combination of natural and man-made features are striking. Basically it’s a centuries-old woodland of indigenous oak, hornbeam and wild service trees, which is rare and precious in London. But it bears the marks of the humans who, centuries ago, depended on its wood for fuel and building material, and who managed it by selectively pollarding the trees.

They also built banks, still visible along sections of its boundary, to prevent cattle straying into the wood, and laid hornbeam and thorn hedges along the northern and eastern sides. Today fragments of those hedges still survive, the original hedgerow trees transmogrified by neglect into fantastic arboreal shapes. As the Woodland Trust’s website says,

The stars of this ancient woodland are 60-year-old hornbeams that were laid as hedges and now have gone wild in amazing twisted shapes.

But the Trust goes on to say,

The bad guys are rhododendrons taking over. 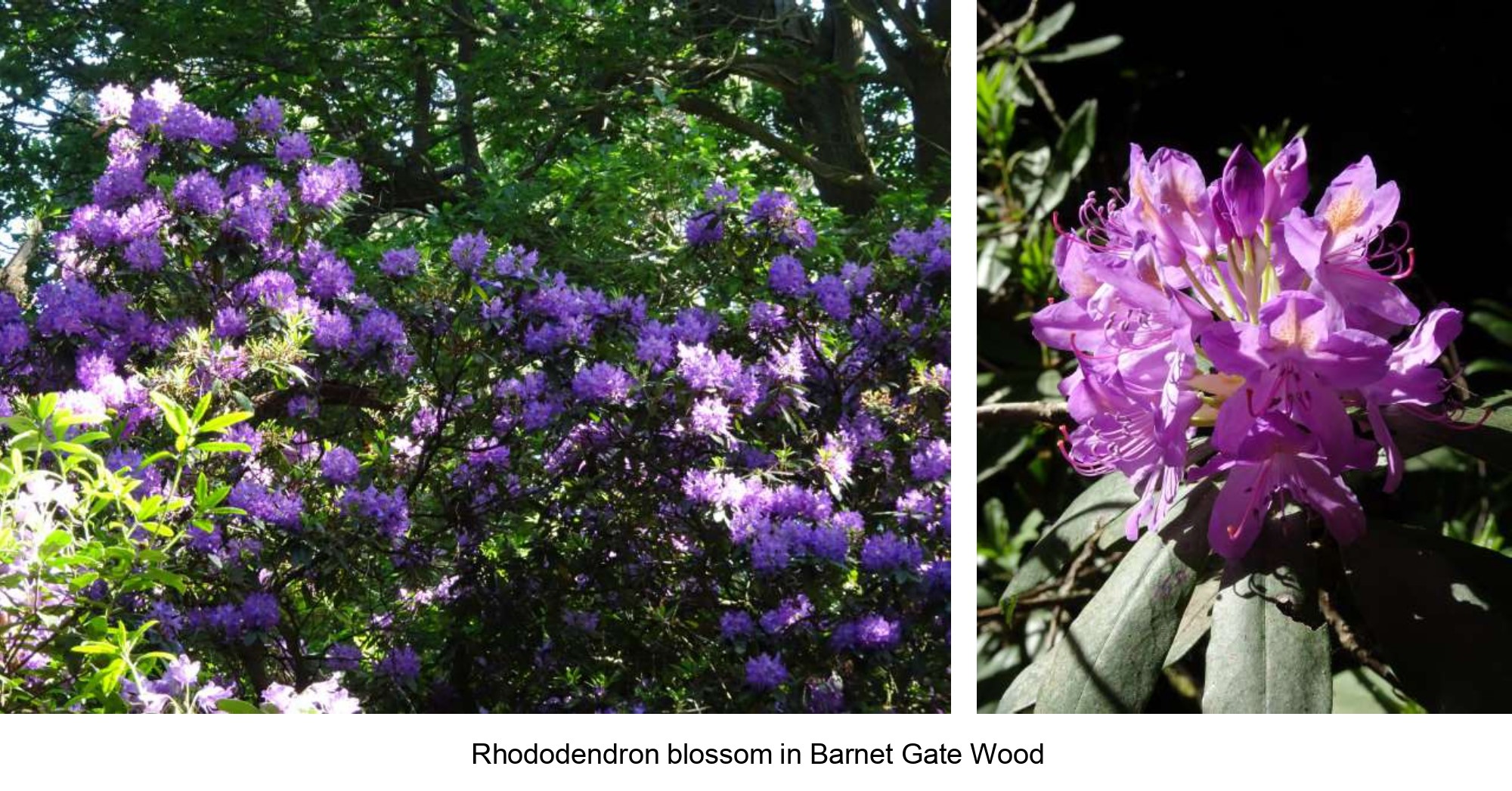 Rhododendrons were only introduced to Britain in the late 1700s, and were probably planted here in the 1800s to provide cover for game. For http://www.countrysideinfo.co.uk/ they are a killer:

The plant is responsible for the destruction of many native habitats and the abandonment of land throughout the British Isles…Where conditions are suitable, rhododendron will out-compete most native plants. It will grow to many times the height of a person, allowing very little light to penetrate through its thick leaf canopy. This effectively eliminates other competing native plant species which are unable to grow due to insufficient light. This in turn leads to the consequent loss of the associated native animals.

So, a sight to marvel at – but an ecological disaster. They say the Devil has all the best tunes. Does she also stage the most spectacular floral displays? Go to Barnet Gate Wood this weekend and decide for yourself. 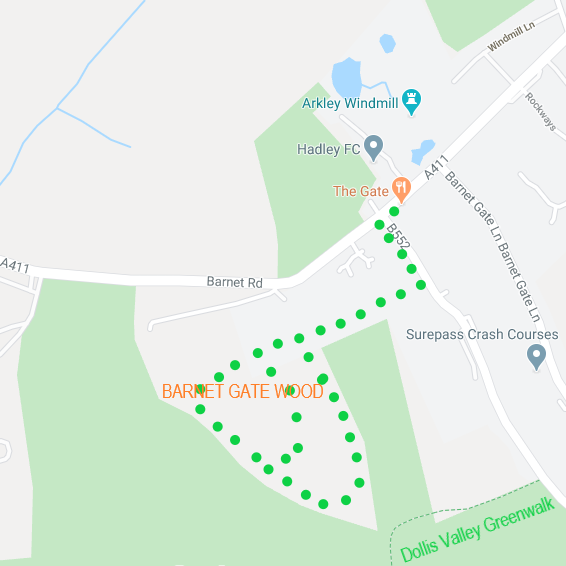 This is the second of a series of short local walks recommended by our longstanding member Owen Jones. (The first was Whitings Hill & Whitings Wood, posted on our website on 22 May.) Owen writes,

Barnet Gate Wood is well worth a visit as an ‘ancient woodland’. The ‘permissive path’ to and around it should be open on all days of the year, apart from 28th February.

The ideal starting point for this walk is The Gate pub at the top of Hendon Wood Lane in Arkley. For those of us not living in Arkley, that entails a considerable walk along the busy A 411 or a 107 bus-ride (which Covid-avoiders may not wish to risk at present), so for most of us a short drive or cycle-ride will be needed before the walk itself.

From The Gate, walk down Hendon Wood Lane on the right side, looking out for the public footpath just before the house ‘Tree Lodge’. Shortly you will come to a division of the ways, the permissive path ahead leading to Barnet Gate Wood while that to the left is the poorly signed public footpath to Highwood Hill and Moat Mount Open Space (which will be subject of a separate walk). 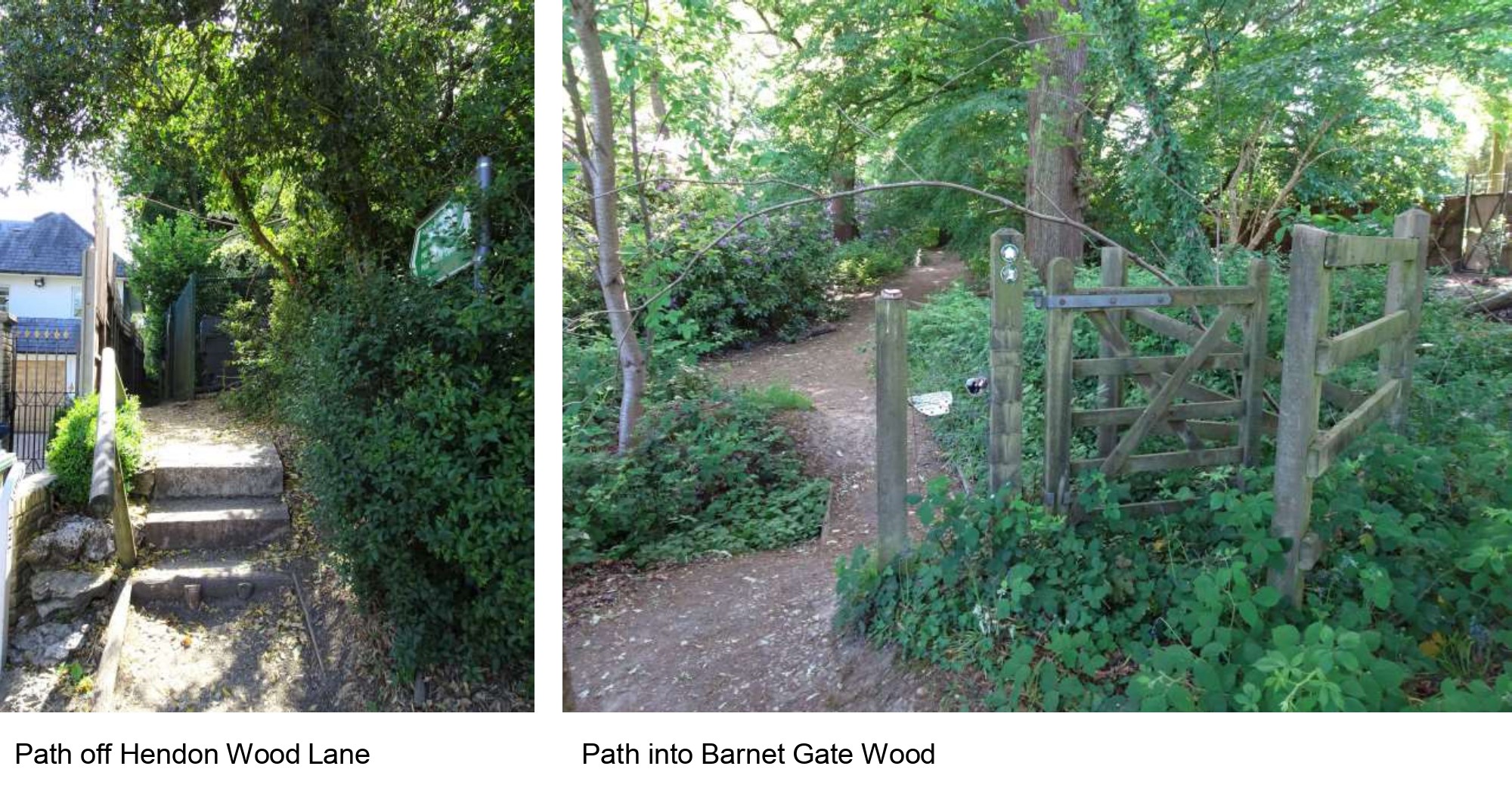 Beyond the disused gate there is a circular path that roughly follows the perimeter of the wood. On your right, at intervals you will see the gnarled hornbeams that might have come out of an Arthur Rackham illustration. Another path cuts through the middle of the wood, where you can bathe in the blossom of the rhododendron groves that are colonising it.

Owen is the author (with David Ely) of the Society’s publications Rambles Round Barnet – In the Footsteps of EH Lucas (Volumes I & II). For further information, use the button at the foot of our News page.