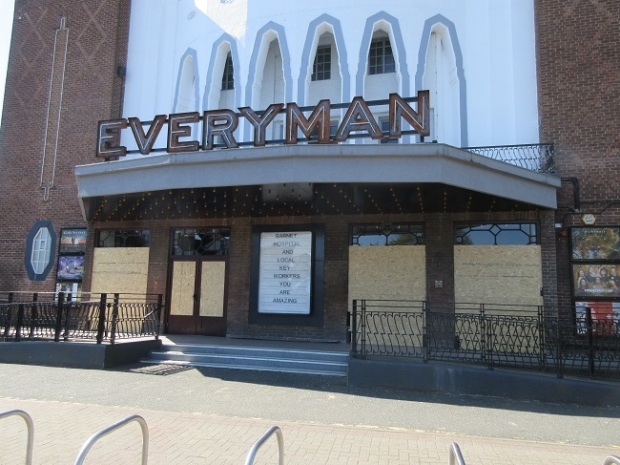 Safety first for art deco windows
Protective wooden boarding has been installed across the art deco windows of the Barnet Everyman -- a sure sign that a trip to the cinema is out of the question for weeks, if not months to come. At the front of the building, in place of the daily programme of films, there is a bold message of praise for front line staff tackling the coronavirus pandemic. "Barnet Hospital and local key workers: You are amazing."

Everyman Cinemas told the Barnet Society that the front windows had been boarded up as a safety measure, and to prevent vandalism.

"Don't worry, we're not closing any of our cinemas. We'll be opening them up just as soon as we can."

It is Grade II listed by Historic England which says such buildings are "of special interest warranting every effort to preserve them".

Once listed, a building may not be "demolished, extended or altered without permission from the local planning authority".

The former Odeon was designed by Edgar J Simmons and it is said by enthusiasts to be one of the architect's finest buildings, famous for its "moorish styling,art deco features and octagonal shapes".

The triangle of land on which the Everyman stands -- bounded by the Great North Road and Northern Line underground track -- is owned by the Leathersellers' Company and is designated for further residential development under Barnet Council's draft plan for the area.

The draft plan suggests that 40 per cent of the site could be used for housing -- providing 84 news homes -- while retaining both the cinema and Queens Arms.

The Odeon Barnet opened on 15 May 1935 and the first films to be screened were "Transatlantic Merry-Go-Round" starring Gene Raymond and Laurel and Hardy in "Them Thar' Hills".