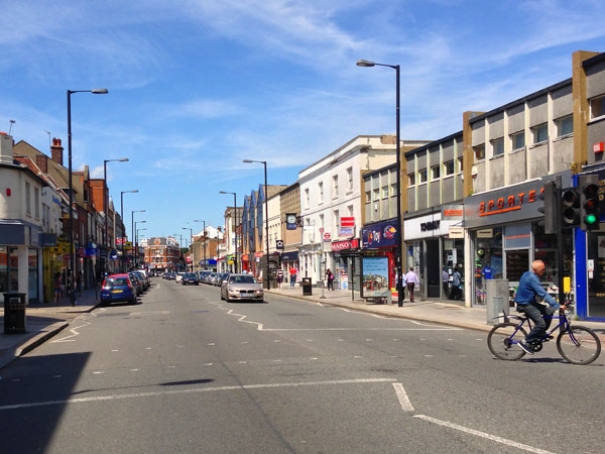 Could Barnet be turned into a must-visit boutique shopping town?
An imaginative array of ideas for reviving Barnet’s shopping centre was outlined at the Barnet Society’s annual question and answer session with the Chipping Barnet MP Mrs Theresa Villiers.

Members welcomed the announcement by the William Pears Group that it intends to construct a new High Street entrance to the Spires shopping centre, but what they believed was needed most of all was an overall strategy to win back the shoppers who now go elsewhere.

Questions to Mrs Villiers illustrated the conviction of local residents that Barnet could become a niche shopping centre once again if only there was some long-term vision on the part of Barnet Council.

In her reply she told the meeting (28.3.2014) that the improvements promised in the Spires would make a valuable contribution. “The Pears Group want to make the High Street entrance more visible and welcoming and if they do refresh the entrance along with some of the units that could make a huge difference.

“But we do need to do much more to promote Barnet Market and to encourage people to visit the Spires and the High Street shops as well.”

Barnet could be turned into a must-visit boutique shopping town” to rival St Albans, Muswell Hill or Crouch End...

Samantha Wrightson was sure Barnet could be turned into a “must-visit boutique shopping town” to rival St Albans, Muswell Hill or Crouch End if only the local council showed the same kind of commitment demonstrated by local authorities in the Cotswolds.

Free paint was on offer to redecorate shop exteriors from a palette of Farrow and Ball colours; the local councils also offered incentives to independent bookshops and cafes and offered empty premises for use as art galleries and studios, which all helped attract visitors to the Cotswolds.

“High Barnet is a great-sized town surrounded by pretty countryside, duck ponds and full of stunning historic houses . . . but it has few decent shops.  With some imagination, the area in front of Church Passage could become a stunning piazza with outdoor seating,” said Ms Wrightson.

Mrs Villiers agreed that other towns had been extremely imaginative in their promotion. She had recently been to Tewkesbury, and had been impressed by the town’s re-enactment of the Battle of Tewkesbury which took place in May 1471, a month after the Battle of Barnet.

“Perhaps we have to do more in Barnet to promote our cultural heritage and try to follow Tewkesbury’s example of holding a re-enactment. Our heritage is an asset which we haven’t properly developed.”

She hoped a team of archaeologists at the University of Huddersfield who carry out battlefield excavations would renew their application to the Heritage Lottery Fund for financial help with a dig to determine the precise site of the Battle of Barnet.

“If that bid could be assisted by the Mayor of London Boris Johnson, I am sure he would be pleased to give his support for an excavation of what after all is the only heritage battlefield site in Greater London.”

When it came to the problems of the shopping centre, the unanimous view of those who submitted questions was that without more free parking, and meters for street parking that took cash, High Barnet’s shops stood little chance of regaining lost custom.

A free hour in the Moxon Street car park was a step forward but Teresa Kelly said it was not very convenient for the elderly or disabled, and a minimum charge of £2 after sixty minutes was another disincentive.

Gail Laser feared that Barnet Council was to blame for outsourcing services such as planning to Capita, and in effect disengaging from a discourse with local traders and organisations.

“By contrast Enfield Council goes out of its way to encourage investment, new business, jobs, retail expansion and housing throughout the borough. They have brought together council decision makers with a panel of experts to share good practice.”

In replying to questions Mrs Villiers said that record numbers of people had in fact signed up to the telephone parking scheme and scratch cards were on sale in local shops which could be used for parking in the High Street. “But I agree Barnet Council could do more to encourage the alternative of cash in parking meters and more to publicise scratch cards.”

The Barnet Society along with other local groups has joined the newly established Chipping Barnet Town Team which says it intends to publish a newsletter to keep everyone in High Barnet “up to date with developments in the town”.

More in this category: « Twin spires to stay Plans go in for Spires’ facelift »