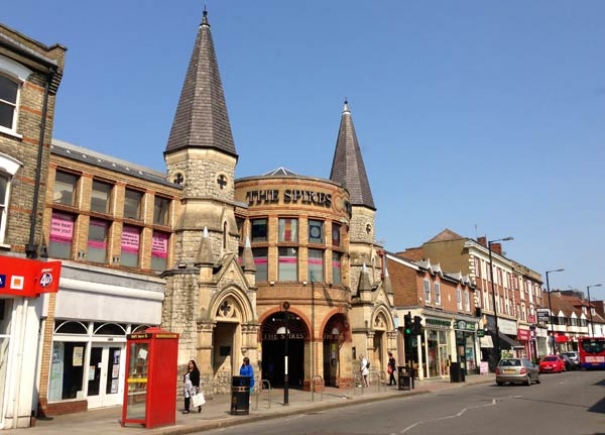 The twin Spires will stay
A controversial plan to demolish the twin spires to provide a new entrance to the Spires shopping centre has been dropped after overwhelming opposition from Barnet residents and shoppers.

Architects for the William Pears property group have been instructed to draw up a detailed planning application that would retain the twin spires of the former Methodist church while still opening up the entrance from the High Street.

The Pears group have also announced that Carluccio’s intend to open a cafe and restaurant in a unit to be created in the shop that fronts on to the High Street and was formerly WH Smith.

Charlotte Dunlop, Pears’ asset manager for the Spires, told a meeting of the Barnet Town Team (24.2.2014) that there had been an “extremely encouraging response” to the consultation process which began on Friday 14 February when shoppers were asked to comment on alternative drawings and images which proposed a new entrance either with or without the twin spires.

Over 1,000 completed questionnaires had been returned and more were expected before the consultation officially closed on Wednesday 26 February.

“But the overwhelming response from the public was towards retaining the spires which is what we intend to do, having listened to the feedback,” said Ms Dunlop.

A detailed planning application will be prepared in the coming weeks and should be submitted to Barnet Council by the end of March.

If a decision was made within three months, as the Pears group hoped, work on the new entrance and preparatory work for the Carluccio’s cafe and restaurant should start in early 2015.

Magnus Wills, of the architectural practice Leslie Jones, said a new open entrance to the Spires would improve “connectivity” between the High Street and the shopping centre.

The intention was to remove the existing brick piers between the two spires and the entrance would be opened up to daylight by removing the rotunda over the entrance.

“We would create a simple, large opening setting the twin spires in a sympathetic elevation, replacing the brickwork with natural stone.”

Mr Wills said the shopping centre needed a new entrance because it was “not very welcoming or enticing”. While local people knew that it led to a shopping  centre, that was not the case with visitors. Waitrose was High Barnet’s largest retailer but visitors walking along the High Street did not know it even existed.

While Waitrose was a key strength, popular with the community and family friendly, the weaknesses of the Spires shopping centre were its lack of footfall; the fact that it was trading poorly; that it was under-occupied; and that it had units that were too small and lacked signage.

In replying to questions from members of the Town Team, Mr Mills and the Pears’ group representatives confirmed that Waitrose had expressed an interest in expanding their store in the Spires and this was being discussed.

The hope was that now that Carluccio’s had signed up for a unit in the Spires, it might be possible to attract other high-profile high street names.

Carluccio’s has signed up for The Spires

Mr Mills said there could be further development in and around the Spires site if trade improved.

At the conclusion of the Town Team meeting its chairman Councillor David Longstaff said William Pears’ decision to go ahead with its plans for a new entrance to the Spires, together with signing up Carluccio’s, was highly positive news for the town.

If planning approval was obtained and the work went ahead, the improvements would be welcomed by High Street traders and residents alike.

More in this category: « Now The Spires without the twin spires Barnet a boutique shopping town? »