A legacy for Chipping Barnet 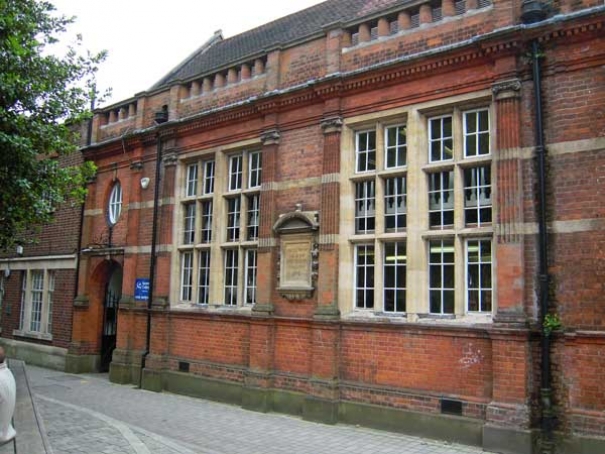 The Hyde, Church Passage
At a time when Barnet’s library service is threatened with savage cuts, The Hyde Institute in Church Passage is a reminder of the proud place libraries deserve in the community, and a celebration of craftsmanship.

As a delightful contrast to the guns and smoke at 1B Church Passage, look left at its dignified neighbour, the Hyde Institute.

The Hyde is one of the best facades in Barnet and, along with Butterfield’s St.John the Baptist’s church, and its parish hall further along Church Passage, nicely frames the churchyard and its war memorial – Chipping Barnet’s principal civic space.

In 1888 Julia Hyde left £10,000 to establish a free “Literary Institute and Reading Rooms” for parishioners of Chipping Barnet and Monken Hadley in memory of her late husband, Henry.

The Misses Paget (governors and sponsors of Queen Elizabeth’s Girls School) commissioned Thomas Graham Jackson (1835-1924) in 1903, and it was completed the following year. It became Barnet public library, and is now an art and design studio of Barnet & Southgate College.

Jackson had been a pupil of George Gilbert Scott, architect of St. Pancras Hotel and one of the greatest Victorian architects.

In 1862 he started his own practice, and in 1876 won a competition for the Oxford Examination Schools with an English Renaissance design.

He subsequently designed many buildings in Oxford, notably Hertford College’s Bridge of Sighs, and later in Cambridge.

The Hyde is a distillation of his style. As his biographer, Whyte observed, “…the Renaissance had liberating associations…with a flowering of free thought, knowledge and science…” It was an appropriate choice for Barnet’s first public library.

It has a Free Classical façade, with a pitched roof behind its parapet balustrade and traces of a former lantern or ventilator.

The entrance passage on the left originally gave access to a double-height reading room with an open timber roof and galleries; a first floor has since been inserted with offices, etc.

At the back is a generous top-lit extension for meetings, lectures and/or practical classes.

The façade is unified by a subtle grid. It is dominated by two pairs of six-light windows of stone, derived from Hardwick and other grand Elizabethan halls. Through them can be seen the original gallery balustrade.

They are framed by Ionic pilasters, their lower third solid and upper two-thirds fluted in Mannerist style, which stand on a plinth and support a dentil course. All these are in red brick, expertly carved.

Across them, continuing the transom lines, run two stone courses, tying in the central commemorative plaque and the oval window above the entrance arch.

Jackson was often criticised as a designer of surface, uninterested in planning.

The Hyde reading room must have been quite dark, and its galleries cut arbitrarily across the windows. But its façade is a cameo of architectural craft, perfect for the centre of Chipping Barnet.

It is on Barnet’s list of protected buildings – but unfortunately that’s no protection from brash neighbours!