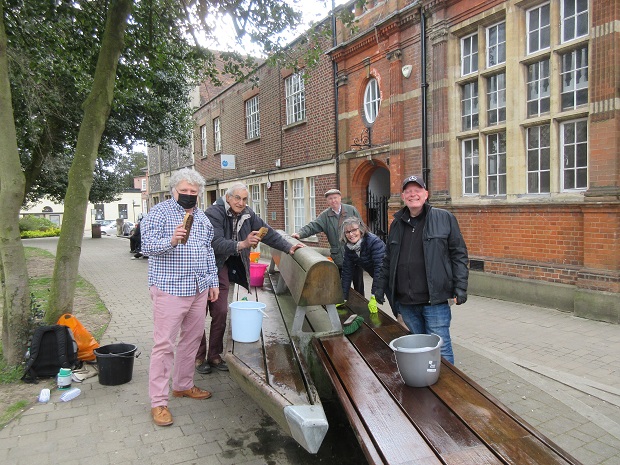 A band of volunteers spent the afternoon scrubbing down High Barnet's most popular street art fixture -- the long teak bench that extends for much of the length of Church Passage and provides a welcome resting place for one and all.

Since it was installed a decade ago as part of town centre improvements paid for by the Mayor of London’s outer London fund, the bench has become a regular place for meeting up and having a chat.

On bright dry days – and especially so during lockdown – there is often rarely space to be had as weary shoppers take a rest, visitors drink a cup of coffee, or youngsters tuck into take-away snacks.

The architecturally designed structure was last cleaned in 2016 and Barnet Society treasurer Derek Epstein, who takes a close interest in the bench’s welfare, thought it was time to round up another working party to scrub the bench clean before applying another coat of teak oil.

Because of its siting under trees in the churchyard, the long expanses of teak tend to discolour quickly with accumulations of grime and green algae.

The first task for the working party, manned jointly by members of the Barnet Society and the Barnet Residents Association, was to clear out the detritus wedged between the planks of the bench.

Passers-by were full of praise as the team set to work – (see above, from left to right, Eamonn Rafferty and Derek Epstein of the Barnet Society and Gordon Massey, Wendy Marler and Ken Rowland of the Barnet Residents Association).

Cigarette stubs were in abundance, but the volunteers found fewer lumps of discarded chewing gum than in 2016 as well as less graffiti on the bench – a sign perhaps that some of the younger generations have become more thoughtful.

Luckily while scrubbing away all afternoon the working party were able to refill their buckets of water at a tap in the kitchen of the parish church.

Ken Rowland, chair of the residents’ association, said the popularity of the bench proved its value to the town and he regretted the failure of Barnet Council to do more to clean up litter in Church Passage and care for the bench. 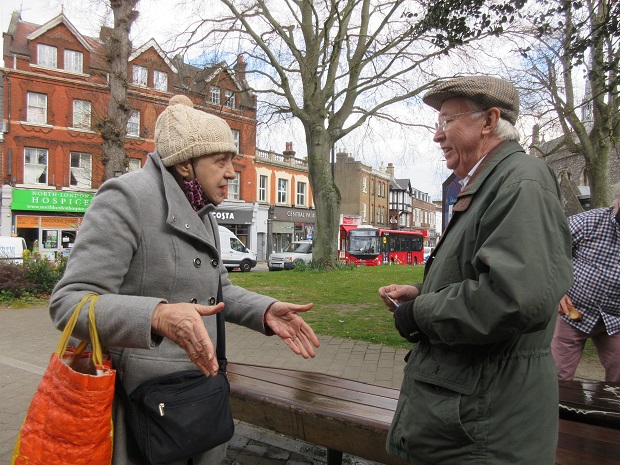 Passer-by Margaret Teague from New Barnet congratulated the working party for taking the initiative and cleaning the bench.

She told Gordon Massey, the residents’ association’s planning officer, of her concerns over the council’s lack of support for the town centre and the inadequacies of its street cleaning.

Other shoppers and passers-by stopped to give their encouragement. 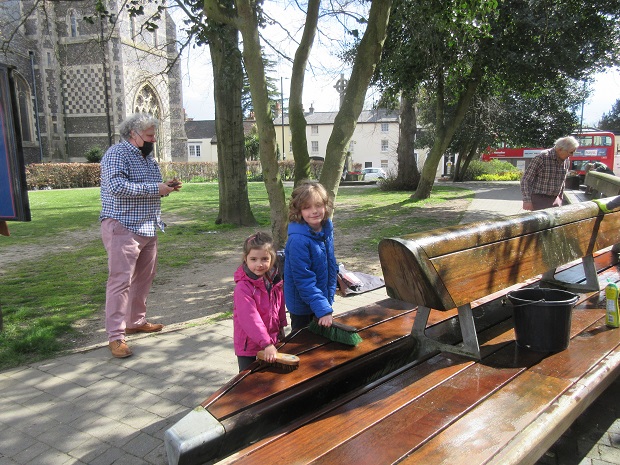 Eamonn Rafferty (left) who edits the Barnet Society newsletter, was joined by two young helpers – Amilie (4) and Ethan (7) Parkinson – who set to work with scrubbing brushes.

Mr Rafferty said Barnet should be proud of its bench which he considered “a magnificent piece of street architecture, where form and function blend together in a beautiful location.” 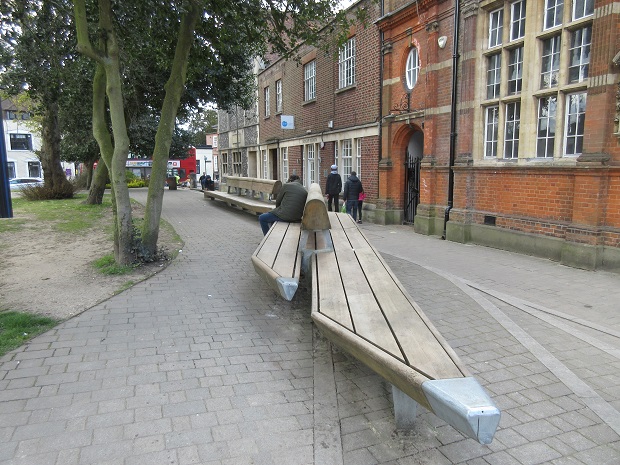 After several hours hard work, the scrubbers were slightly less lyrical but agreed that the Church Passage bench deserved a mention in the Guinness Book of Records for perhaps being the longest, single-span bench in the UK.