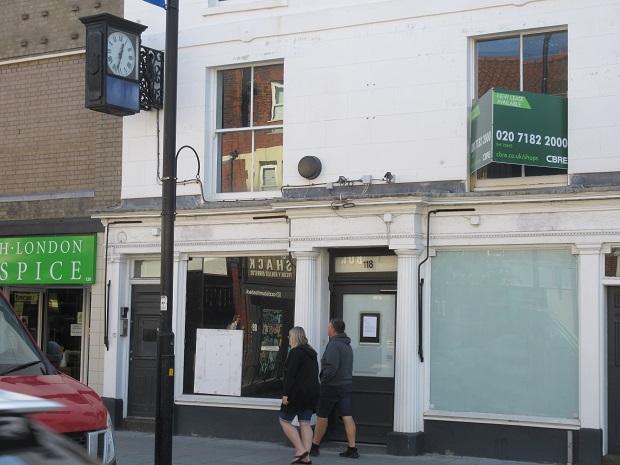 An application is being made under the Gambling Act to open a bingo hall on Barnet High Street in the historic building that was most recently a branch of the TSB bank and which was formerly the offices of the Barnet Press weekly newspaper.

Barnet Town Team says it will vigorously oppose the application.

“A bingo and gaming centre has no place in Barnet High Street,” says Bob Burstow, the Town Team secretary. Love Barnet founder Gail Laser was equally horrified by the application. 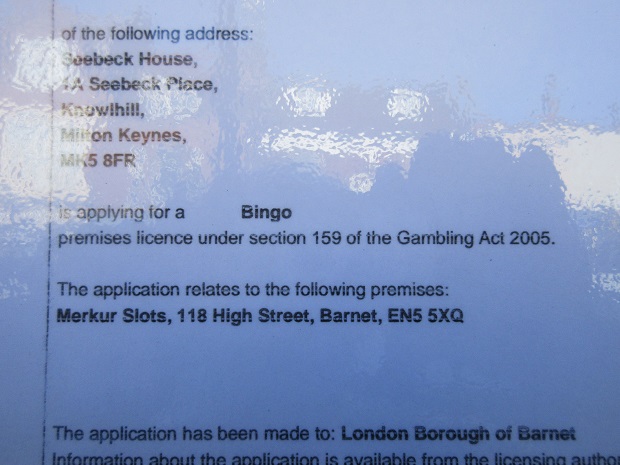 A notice on the front door of 118 High Street, Barnet, says that nearby businesses and people who live sufficiently close to be affected have until July 12 to make any representations to Barnet Council which is the licensing authority.

Well over 100 of Merkur Slots’ adult gaming centres are run on a 24-hour basis and larger premises offer hot food and premium drinks.

The company has yet to indicate the range of games and entertainment that would be available in Barnet.

Its website says their High Street venues offer low-stake bingo games with pay-outs ranging from £5 to £500.

The Ballards Lane premises, at the junction with Redbourne Avenue, offer bingo and games.

Merkur Slots, which was founded in 2007 and employs 1,600 people, is part of the Gauselmann group which operates entertainment and bingo clubs across Europe.

Barnet Town Team has opposed previous applications for gaming centres in the High Street and Mr Burstow says a strong objection will be lodged with Barnet Council.

“A gaming venue would diminish the appearance of Barnet High Street and is not the sort of night-time business that we want in our town centre.

“What does the company mean when it says these are adult gaming centres? How strict will access be?

“Close by is Barnet College, as well as several secondary schools, and without proper checks a gaming centre like this might well attract students and sixth formers.”

Gail Laser said Love Barnet would also make the strongest objection.  "A gaming venue is totally inappropriate in our High Street and it would undermine everything Love Barnet and others have achieved in trying to make our town centre more attractive.

118 High Street is a listed building, and its wall-mounted clock has been a familiar and much-loved feature.

Although the clock was maintained in running order by TSB, currently it has stopped, to the frustration of shoppers and passers-by.

Estate agents CBRE Co UK are offering three separate leases on 118 High Street, which is a three-storey building which is listed as Grade II by Historic England.

An application, which was later withdrawn, was made earlier this year to convert the first and second floors of the premises into five self-contained flats.

In opposing the application, the Barnet Society drew attention to the significance that Historic England attached to the High Street façade.

Robin Bishop, who chairs the society’s planning team, said the proposed conversion of the first floor to create a courtyard and an extension to the second floor “seemed alien to the historic character of the building”.

He believed a listed building deserved a better piece of design.

Merkur Slots has taken leases on former bank buildings across the country – as in Ballards Lane –as they tend to be in the middle of town centres and because former banking halls offer plenty of space for a gaming venue.

Currently another similar application is being made to convert another historic former bank in Prescot Road, Liverpool, and it too has attracted objections.