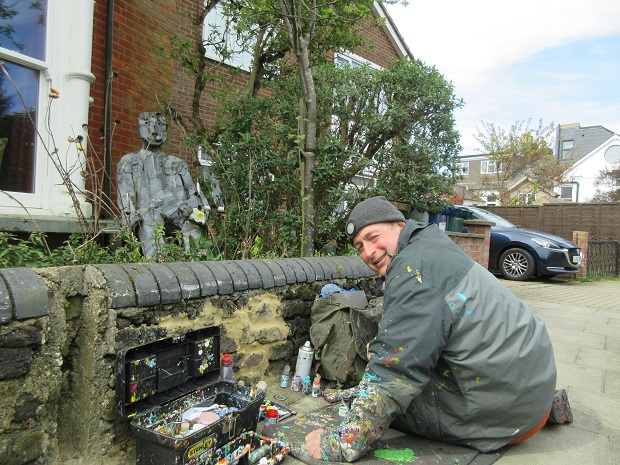 Residents were delighted to welcome back to High Barnet the celebrated chewing gum artist Ben Wilson who spent a day refreshing a trail of tiny pavement illustrations that starts outside his parents' former home in Carnarvon Road and continues round the corner into Alston Road.

Each little painting on a flattened lump of discarded chewing gum depicts an image chosen by one of the householders – a miniature blackbird, the favourite of his late mother; Batman, for the children of her carer; a phoenix statuette for one neighbour; and even a wily fox for another. 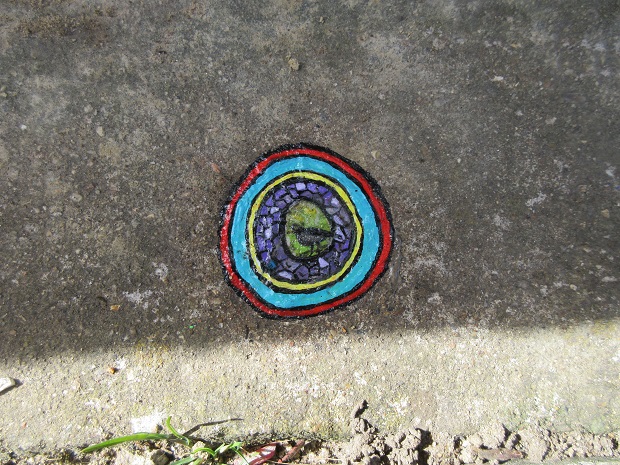 Ben started painting his series of images in Carnarvon Road and Alston Road in 2004 and it is one of the many trails of his chewing gum paintings that can now be seen across London and around the world.

Educated at the former East Barnet Comprehensive School and what was then Middlesex Polytechnic, Ben’s flourishing artistic influence has had an impact over the years in and around Barnet in different and unexpected ways.

His iron man sitting in the front garden of his Carnarvon Road family home – a sculpture which he created in 1984 out of surplus zinc roofing sheets – often brings a smile to passers-by.

One of Ben’s most celebrated local exploits was the construction of the mysterious sleeping giant sculpture which was hidden away in Hadley Wood, and which caused quite a sensation at the time.

The giant figure was constructed by Ben in April 1986 and assembled out of a fallen beech tree which was brought down in a storm, and which took with it two hornbeams.

“I didn’t realise it would be as a big as it ended up. I wanted walkers in the woods to be caught by surprise and wonder how it got there. After about three years I secretly dismantled it, just to add to the mystery.”

Ben was in his twenties when he created the sleeping giant, and it became part of his philosophy of creating art that grew out of the environment and that was empathetic to the surroundings.

Once he unpacked his paintbox and began restoring the miniature gum painting of a blackbird outside what is now his sister’s home in Carnarvon Road, neighbours and nearby residents were soon stopping for a chat. There was no shortage of testament to Ben’s creative talent. 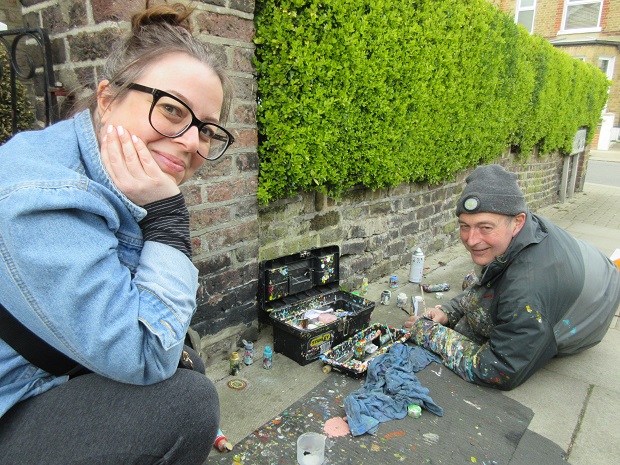 Charlotte Thompson, herself an artist living in Barnet, told Ben that as a child she loved seeing his sleeping giant in Hadley Wood.

“I remember it so well. It was such a mystery. After so many years it’s great to meet Ben at last. I have read so much about him. I just love his work. His chewing gum paintings are so irreverent.”

Ben began utilising discarded chewing gum because he saw it as a way to transform into an art form rubbish that had been thrown away in the street.

“The lumps of squashed chewing gum are a no man’s land, rather like installing a tree figure on common land. What is so important is that you don’t need permission to paint them.

“Painting a pavement slab could get me into trouble. I could be accused of damaging or defacing public property, but a lump of squashed chewing gum doesn’t belong to anyone, and it can always just be removed with a scraper.

“Once they are decorated, they become an art form influenced by the environment. As soon as I begin work, people always stop to chat and give me ideas and suggestions.” 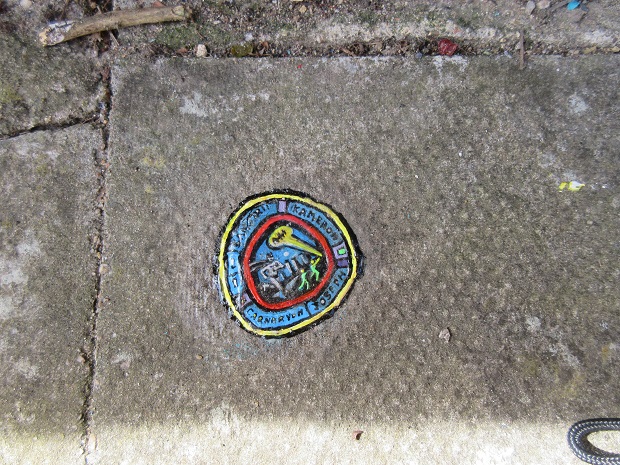 He began his first trail in 2004, starting at the top Barnet High Street at Hadley Green and continuing down across the junction with St Albans Road, and passed the Spires, to the parish church.

Unfortunately, all the miniature paintings disappeared when the pavement was renewed – although a few of his painting do remain on the High Street pavement between The Mitre public house and Park Road.

In his early years as a street painter, he was stopped hundreds of times by the Police.

“I was subjected to lots of stop and searches and told to fill out a form because I was damaging public property or causing an obstruction.”

One two occasions he was arrested for causing criminal damage and he faced court cases.

“Finally, the Crown Prosecution threw out the case after my arrest in Trafalgar Square. How can you cause criminal damage to a lump of chewing gum?

“My next arrest was by the City of London Police, again for criminal damage and obstruction, but the magistrates sent the case back to the Crown Prosecution and eventually it was thrown out.” 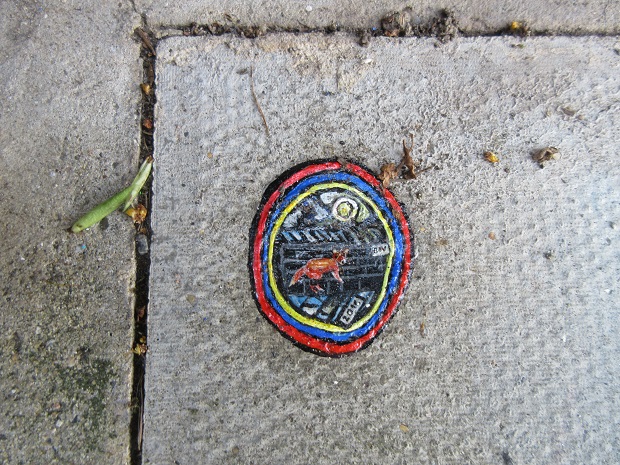 Ben’s fame, and the notoriety he gained for an art form that took advantage of discarded chewing gum, has gained him commissions from around the world and his trails of miniature paintings have become tourist attractions.

His next trip is a return visit to Zurich where he will again be working with children and will create a new trail of tiny images as well refresh a series that he painted in 2019.

Ben said he inherited his artistic bent from his parents: his father was a ceramicist and interested in experimental theatre and his mother studied creative illustration.

“I started in ceramics when I was three and a half – and I have still have my first pot which I made and decorated myself when I was five.”

He studied art at Middlesex Polytechnic and his early work, creating sculptures and structures, was championed by Peter Green.

He completed various installations in Hadley Wood, Trent Park and at Cat Hill and he took on commissions for sculptural work around the world and conducted workshops, before devoting his energies to creating chewing gum paintings.

In recent years Ben has attracted considerable publicity for his imaginative ideas for illuminating pavements and walkways with miniature paintings – creative thinking that was featured most recently on Grayson’s Art Club on Channel 4 when he was interviewed by Grayson Perry’s wife Philippa.