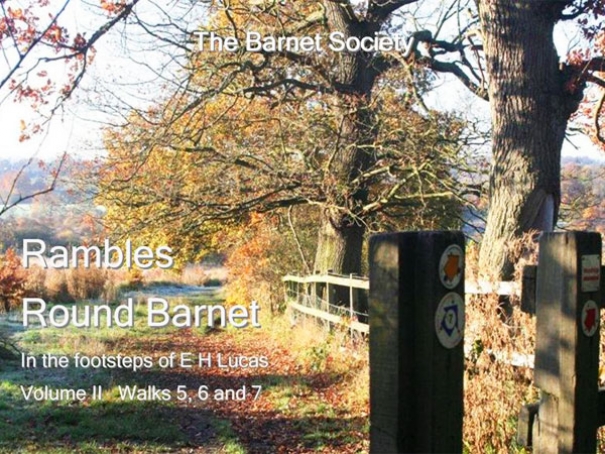 Rambles Round Barnet
Rambles Round Barnet 2 went on sale for the first time at the Christmas Fair on Sunday 1st December 2013. It was gratifying to talk to local people who had bought Part 1 at the last Christmas Fair or, subsequently, from The Paper Shop, Waterstones or the Barnet Museum and were keen to see some more of the surrounding countryside using this new guide.

Part 1 includes areas around Arkley, Highwood Hill, South Mimms and North Mymms. Part 2 covers much of Totteridge, Hadley Woods, Ridge and south of London Colney, with little overlap of the footpaths in Part 1.  Graham Willcocks has repeated the sketch map for all three sections of Walk 5 on a larger scale on the back cover of Part 2.

There is a detailed account of the trees and flowers to be seen in the Darlands Lake Nature Reserve in Totteridge.

The graves of two notable people who lived in this area, Captain John Trotter and the Reverend William Pennefather, are pictured in the churchyard in St Margaret’s Church in Ridge.  Our much-missed former member Alan Howells came on a Barnet Society walk a few years ago and he showed us the grave of Earl Alexander of Tunis who is buried in this churchyard.

Nearly all are accessible by bus

There are four walks that are each two miles long, and thirteen others ranging from three to nine miles.

Nearly all are accessible by bus, while for car users there is advice on where to park a car at the start of a circular walk.

The front cover of the book shows the gateposts below Totteridge Green which are reached by a public footpath starting just beyond the pond at the bottom of the green. The waymarks point out the route to the Folly Brook, which is then followed back to the Darlands Lake.

As with last year, the book is now on sale in The Paper Shop, Waterstones and the Barnet Museum, with Part 1 still available at each outlet. If you enjoyed Part 1, do have a look through Part 2 and maybe buy a few additional copies as Christmas presents for friends and family.

Over 700 copies of Part 1 have been sold so far, with several being purchased this year at the Christmas Fair.