Plans for war memorial centenary but cleaning will have to wait 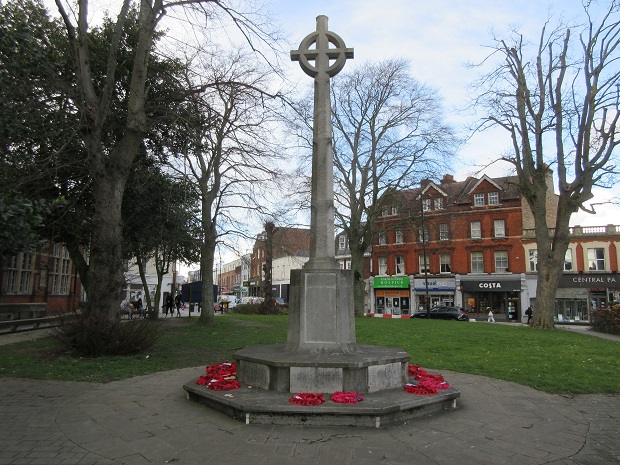 A commemorative booklet has been published by Barnet Museum and Local History Society to mark the 100th anniversary of the erection of the Chipping Barnet war memorial.

Sadly, a clean-up of the Portland stone base, plinth, and column, will not take place in advance of a planned Act of Commemoration which it is hoped will mark the centenary of the official unveiling of the memorial on Sunday 3 April 1921.

Many of the names of the fallen from the First and Second World Wars are hard to read and some barely decipherable because of lichen and soot deposits. 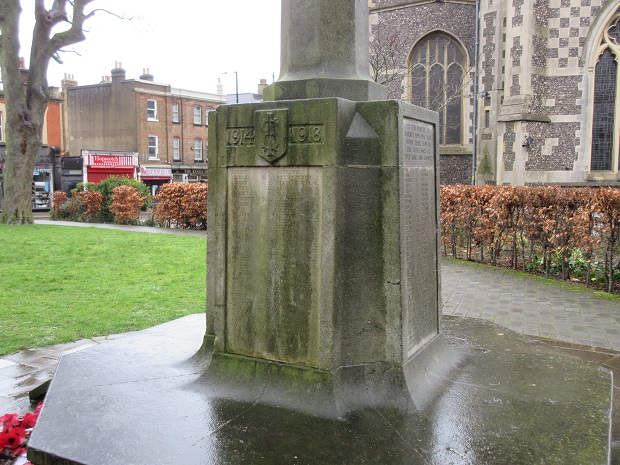 Local History Society members had hoped that Barnet Council would carry out conservation work on the war memorial as part of a programme for restoring memorials.

Hadley Highstone, which commemorates the 1471 Battle of Barnet, has been cleaned and restored – in time for the 550th anniversary of the battle -- but Councillor Stephen Sowerby, who is heritage champion for the Borough of Barnet, told the Barnet Society that Barnet Council did not have sufficient funds at present to clean the borough's ten war memorials. An application has been made to the War Memorials Trust for match funding and the council is hoping for a positive response.

Chipping Barnet’s war memorial was unveiled by General Lord Byng of Vimy, who was born at Wrotham Park, in tribute to what he said were the “Barnet boys who gave their lives...by paying the greatest sacrifice”. 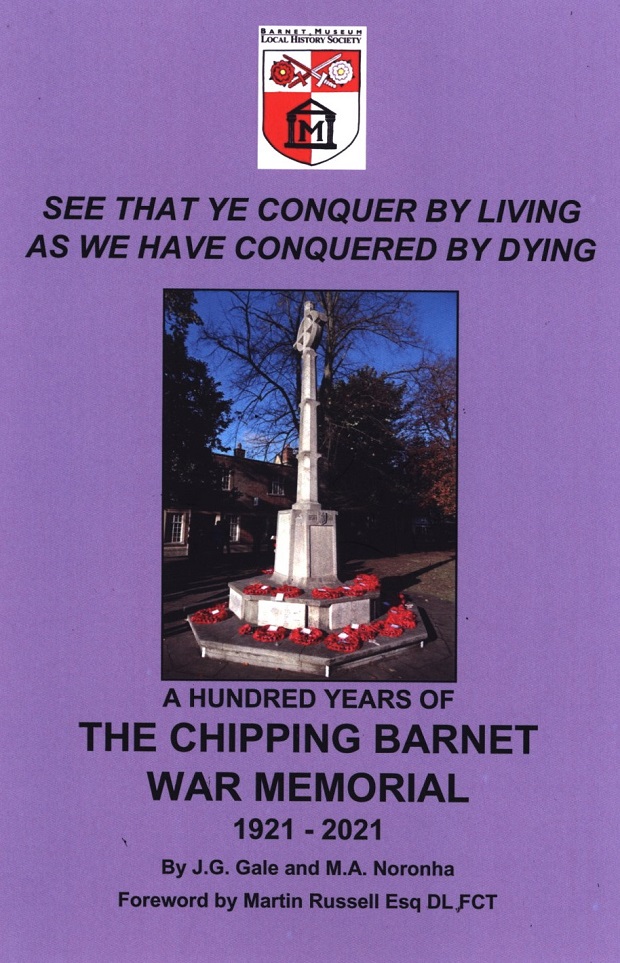 The commemorative booklet, written and compiled by Jeff Gale and Mike Noronha, relives the determined local efforts to raise funds for a memorial and the onerous task of ensuring that all the names of the Barnet men who lost their lives in the First World War were recorded on the plinth.

Illustrating the booklet are numerous photographs and newspaper cuttings from the Barnet Press together with detailed accounts of the services and wreath laying held at the memorial every year to mark Armistice Day and Remembrance Sunday.

“Peace! How the news was received” was the headline over a Barnet Press report (16 November 1918) on how the townspeople of Barnet responded on first hearing news of the signing of the armistice.

“It was about nine o’clock when the town was apprised. What the Rector did was to have the Union Jack hoisted above the tower of the parish church, and the church bells rung.

“The full peal was not sounded because all the ringers were not available. Only two of their number could be found, and to these two lucky townsmen fell the honour of proclaiming, through the medium of the bells, the glad news. The whole of the town was quickly astir.

“Soon the town reflected the feelings of the inhabitants. Flags in profusion were seen on all sides.

“Many of the private houses occupied by those who have suffered heavy bereavement through the war, were unadorned. The feelings of those who have lost dear ones were too deep for joy.”

A campaign to commemorate those from the Barnet Urban area who had lost their lives was launched with an advertisement in the Barnet Press in January 1919 announcing a public meeting to consider erecting a memorial to “Our fallen heroes”.

A committee was elected, the eminent architect Sir Aston Webb inspected possible sites, and it was agreed to erect a public memorial on a plot of land at the east end of the parish church.

Compiling a list of names to be transcribed onto commemorative plaques was no easy task and it became the responsibility of the joint honorary secretary of the committee, W Archibald Boyes, who collated and verified the names ready for inscription.

The erection of the memorial had been completed by November 1920 and it was described in a Barnet Press report ahead of the unveiling the following April:

“The memorial is a tall slender column rising from a solid plinth on two steps and surmounted by an Ionic cross. The whole is made of Portland stone. The names of the fallen, 246 in all, are inscribed on the four sides of the plinth.”

(As the commemorative booklet points out, 275 names from the Great War appear on the memorial today as more were added later.) 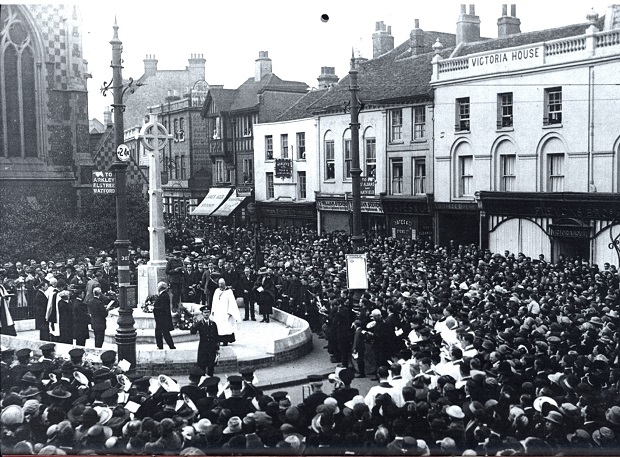 Barnet Town Silver Prize Band and the Salvation Army Band played during the unveiling which was well attended and “a crowd of thousands had filled the thoroughfare stretching from Park Road to the entrance to the Church Passage in the High Street and the junction with Wood Street.”

Accounts of the annual Armistice Day service during the 1920s and 1930s are interspersed with press reports, photographs, and other illustrations – and are interrupted when in 1938 the war memorial was removed from its prominent position in front of the church to make way for a turning space for the trolley buses that were to replace the trams that had previously terminated at “Barnet Church”.

As the Barnet Press recorded, the war memorial “lay in pieces under the church tower” while the Armistice service, with the observance of the two-minute silence, was held in the churchyard. Later, the memorial was re-erected in a newly created garden of remembrance and re-dedicated in 1939.

The opportunity was taken at the time to re-letter the names of those who fell in the Great War and in 1951 the memorial was refurbished, and the names were added of those who lost their lives in the Second World War. The newly restored memorial was then unveiled and re-dedicated.

In recent years Remembrance Sunday services at the parish church have been well supported by the Royal Logistic Corps based at the Territorial Drill Hall in St Albans Road and military parades through the High Street have regularly preceded wreath laying at the memorial. 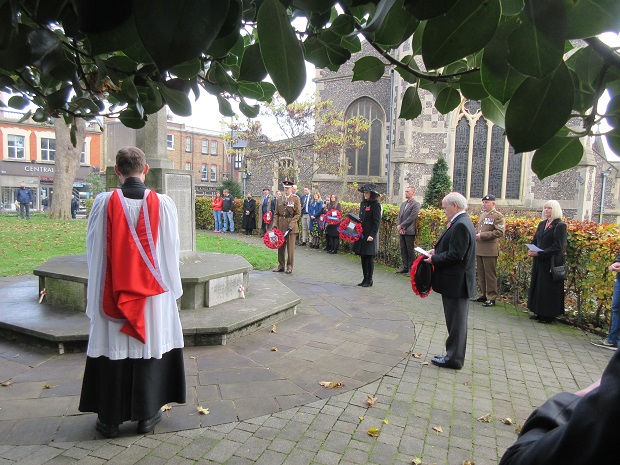 Because of Covid-19 restrictions and the need for social distancing, there was no marching parade for the 2020 Remembrance Sunday service, but wreaths were laid.

Plans have been made for a limited Act of Remembrance to commemorate the 100th anniversary of the memorial and subject to the prevailing restrictions will take place on the morning of Easter Holy Saturday – Saturday 3 April 2021.

Although Barnet Council does not have funding to clean ten war memorials within the borough – including the Chipping Barnet memorial – Councillor Stephen Sowerby said the council was attempting to get a match funded grant to carry out the work. 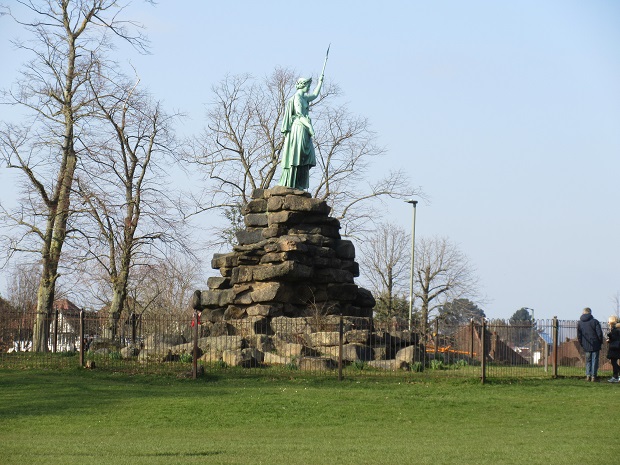 After the conservation carried out earlier this month at Hadley Highstone, the next on the council’s statutory listed monuments to qualify for conservation work is the Peace monument in Friary Park, Friern Barnet Lane.

Peace statues were erected after the death in 1910 of King Edward VII who had become known as the Peacemaker, the “Uncle of Europe”, who fostered good relations between Britain and Europe and who was responsible for the entente cordiale between France and Britain.

Friary Park was created after Friern Barnet Urban District Council purchased the land in 1909 for £7,796. A local benefactor, Sydney Simmons, a carpet manufacturer, reimbursed the cost on condition that the council turned the land into a park “for all time”.

The park was due to be opened on 7 May 1910, but the King’s death meant the ceremony had to be postponed until July.

Mr Simmons had the statue erected the following year. Statue of Peace was sculpted by Joseph Durham in 1862 but its whereabouts between 1862 and its purchase by Mr Simmons is a mystery.

The statue is 3.5 metres high and is mounted on 200 tons of Devon rock in the form of a Devon tor – in recognition of Mr Simmons’ birthplace of Okehampton, Devon.

It has two inscriptions: “In memory of the Peacemaker King Edward VII. Erected by Sydney Simmons, JP, the donor of this park, which opened to the public on May 7th, 1910, the day following His Majesty’s lamented death.”

The need for conservation work on the Peace statue is all too apparent: weeds, shrubs and a large buddleia are all sprouting out of the rocks of the tor and the monument’s base is in urgent need of repair.