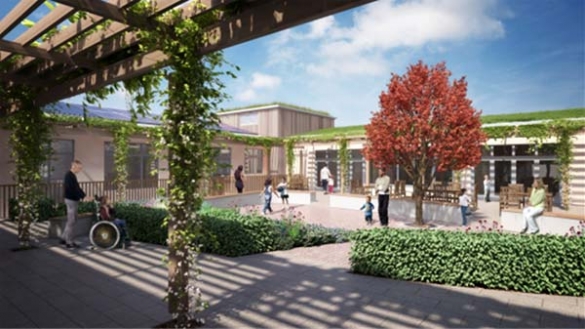 ...and this pushes the proposed Environmental Centre further into the Green Belt...

Outline planning consent for the scheme was granted in 2009, so the principles of land use and building in the Green Belt had already been established. The detailed scheme appears well-designed and thought through; the detailed landscape proposals are particularly welcomed.  However, we note that the latest consent includes an increased size for both buildings from that approved at outline stage and this pushes the proposed Environmental Centre further into the Green Belt.

In their report, planning officers said they considered that ‘…very special circumstances have been demonstrated to justify granting planning permission for the proposed development. The proposed hospice would replace existing old and derelict buildings on the site which themselves do not fall within the range of uses that are generally appropriate in the Green Belt.  Whilst the hospice is larger than the buildings it replaces, this would not be so significant such as to detract from the openness of character of this part of the Green Belt.

Indeed the design and appearance as indicated would enhance this part of the Green Belt and its siting would, compared to existing, allow for wider open public views through the site.

The proposal would maintain the existing nature reserve and the provision of the new countryside centre building would facilitate its continued existence and wider community use.’