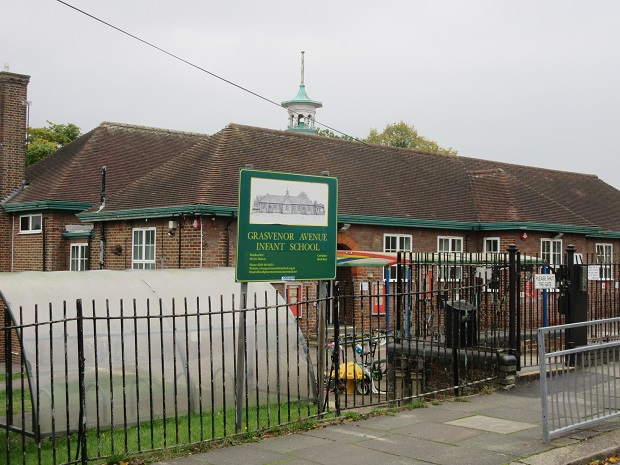 A government decision is expected before the end of the year on the future of the Grasvenor Avenue Infant School where staff and parents have already been warned about its possible closure in July next year.

Officials at the Department of Education are currently looking at the options.

The school’s trustees hope the Secretary of State will be able announce a final decision next month, once the consultation process has been completed, so as to end the uncertainty.

Grasvenor Avenue is unusual among High Barnet primaries because it is infants only – taking children from reception until they are seven – and with a falling school roll it has faced financial difficulties for some years.

Currently the school has just under 60 pupils and in a letter to parents last July the trustees said that with “great sadness” they had been forced to explore the potential closure of the school.

For the past decade, the staff and trustees had worked “very hard” to continue operating as a one form entry infant school with a capacity of 90 pupils, but the “viability of the school is no longer secure”.

Long-term budget deficits were predicted for the future, and this was compounded by low birth rates in the surrounding locality.

Another handicap is that many parents prefer a primary school that has infants and juniors together so that there is no need – as at Grasvenor -- to transfer to another school at the age of seven.

Grasvenor became an academy trust in 2012 and its income was boosted for some years by the Grasvenor Project under which the school mentored over 200 secondary school pupils – a project that closed in February this year due to the Covid.19 pandemic, and which it has not been possible to revive.

Ian Phillips, chair of the trustees, and Grasvenor’s headteacher Ms Eve Watson, are awaiting the government’s decision and are anxious to work with staff and parents once the school’s future is decided.

If the closure goes ahead, Barnet Council, as the local education authority, will be responsible for securing places for the Grasvenor children at other local schools.

Mr Phillips said the trustees were standing by, either to map out a future for the school if that is what the government decides or prepare for an orderly closure.

“Our job is to make sure the process is as tranquil as possible so that pupils and parents know what will happen and so that the staff are supported throughout the closure process.”

Mr Phillips said the trustees acknowledged the difficulties faced by a single school academy trust like Grasvenor which had a small intake of pupils and had a struggle to balance the books.

One option had been for the school to join a chain of academy schools such as  the Enfield Learning Trust – which had been a possible partner – but it had decided against inviting Grasvenor to transfer to the trust.

The site of the school is on land that was gifted to the London Borough of Barnet by the Leathersellers Company and school was granted a 125-year lease when it became an academy in 2012.

If closed, the school building would revert to Barnet Council; the land was originally gifted for the exclusive use of education.