Enhancing and safeguarding the beauty of the Dollis Brook countryside 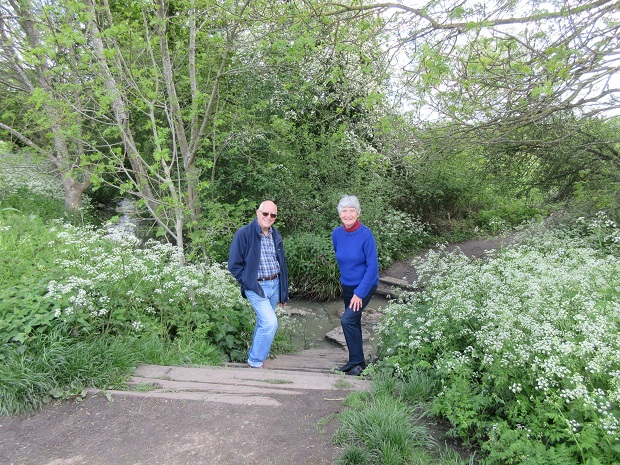 Dollis Valley Greenwalk, one of Barnet's precious green open spaces, is about to get some extra care and attention from volunteers anxious to enhance its biodiversity and ensure its future wellbeing.

DollisBrookers, a group of activists who are already working to improve the environmental attraction of the Finchley length of Dollis Brook and its riverside walk, are planning to extend their efforts north from Whetstone and on towards the brook’s source in Moat Mount, the other side of Hendon Wood Lane.

There are some idyllic country scenes where the brook runs alongside the footpath and greensward south of the King George V playing fields, the Dollis Valley housing estate, and the fields and woods south of Arkley.

Jeffrey Newman, who helped to establish the DollisBrookers group three months ago, visited the Barnet stretch of the brook to see what improvements might be needed. 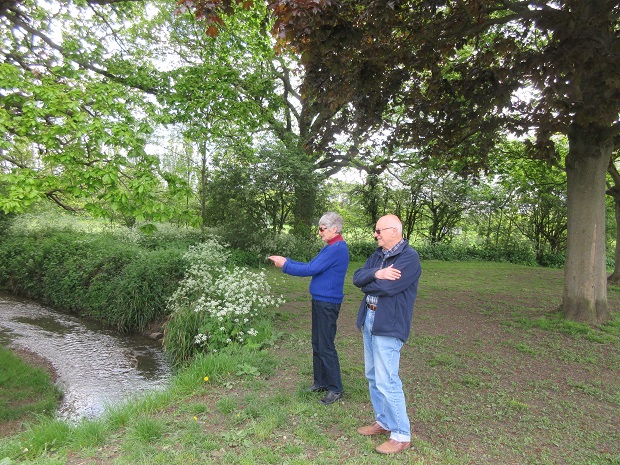 He is seen here with Frances Wilson, footpaths officer for the Barnet Society, who leads the society’s work with the Ramblers and Barnet Council’s rights of way group.

The DollisBrookers’ first initiative in Barnet is a litter pick along the Dollis Valley Greenwalk to be held on the morning Sunday 13 June -- assemble at Leeside, off Mays Lane, at 10.45am for an 11am start. The litter pick is being organised with the help of supporters of Barnet Green Beings and the backing of Barnet Council’s “Pick it, Bag it, Bin it” litter drive which lasts until 18 June.

After previously taking an interest in the care of Pymmes Brook, he was attracted immediately to the appeal of Dollis Brook and the Brookside Walk.

The DollisBrookers’ launch event was a litter pick on the riverside walk between Fursby Avenue and Argyle Road which attracted 35 volunteers and enlisted another ten passers-by.

“What we discovered is that although there are the well-established Friends of Windsor Open Space and the Darlands Conservation Trust, no group seems to take care of the whole length of the Dollis Brook, from its source in Moat Mount until its merges with Mutton Brook to become the River Brent.

“Once we became the DollisBrookers and went on-line we found three other well established groups have been hard at work for years: the SilkStreamers, who are active on the Edgware and Colindale side of the borough; the WelshHarpies who care for the rubbish infested Welsh Harp Reservoir; and Thames21.”

Jeffrey said the likely target of their first litter pick upstream at Barnet would be the greensward that extends from Barnet Lane south of the houses on the Dollis Valley Estate and the roads that south lead off Mays Lane. 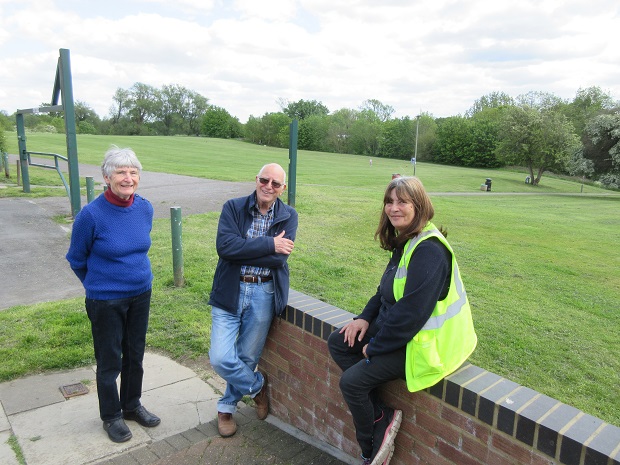 Jackie Adams (far right) who lives in Leeside expressed an immediate interest in supporting the DollisBrookers. She said Barnet Council regularly cut the grass, but litter was a problem.

“We did organise an Easter litter pick which we combined with a hunt for chocolate eggs, and we have persuaded the council to install two extra litter bins.

“In fine weather people have barbecues on the grass. Food wrappers and tins, and especially food scraps, do attracts birds and foxes, so that can be a problem.”

Jeffrey said the DollisBrookers’ long-term aim was to move on litter picking and to take on other tasks, such as the possible removal of any junk left on the banks or in the stream itself.

“Undertaking tasks like that will need a proper safety assessment first, so we will have to take it step by step.

“There may be ways we can actually improve the quality of the water.

“We know there are sticklebacks in some parts of the brook and unusual birds such as white egret so there is a lot to think about. Perhaps we should do a bird count.

“Many of the trees along the bank of the brook are fine mature specimens and perhaps we should find out whether they need to be safeguarded with tree protection orders.” 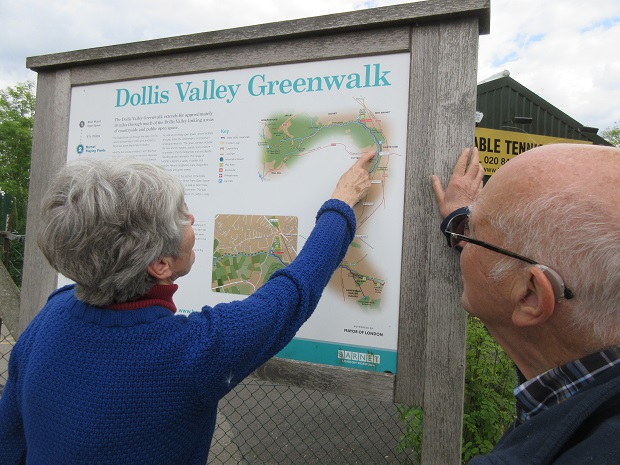 Frances Wilson gave Jeffrey a guided tour of the paths either side of Barnet Lane – four-and-half miles west towards Moat Mount and the source of the Dollis Brook and south for five-and-three-quarter miles to Hampstead Heath Extension.

“Perhaps the most popular local stretch is south from Barnet Lane towards Whetstone which during lockdown became quite crowded.

“Another very special walk is along the footpath leading south from Leeside which passes up beside Totteridge Academy and then goes on up to Totteridge Common.

“We are very lucky in Barnet to such have a wide range of walks close by and perhaps nothing can beat walking beside Dollis Brook on a fine summer’s day.”