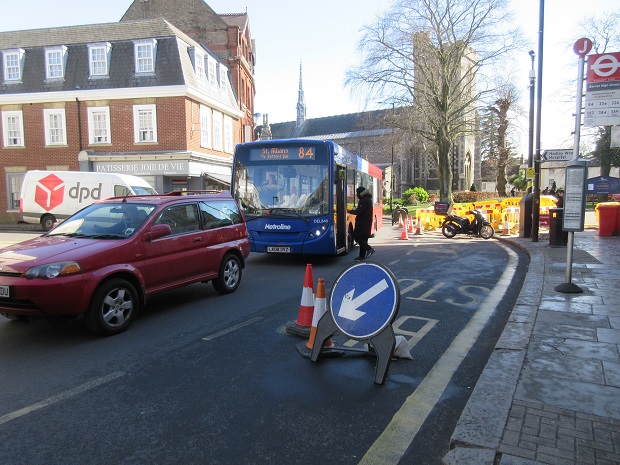 Bus passengers mourning the loss of the 84 service from New Barnet to Potters Bar have taken to social media to express their anger.

“It’s such a shame…I never thought the day would come when we would be cut off from Potters Bar,” said one Barnet resident.

The service was withdrawn on Friday 1 April – and Transport for London is advising High Barnet passengers to catch the 307 service to the Cat Hill roundabout and then take the 298 from Cockfosters to Potters Bar.

Although the service north from New Barnet through High Barnet and Hadley Highstone has been withdrawn, the Potters Bar to St Albans section of the 84 route is being maintained after Hertfordshire County Council stepped in to support a replacement service by Sullivan Buses.

Metroline’s withdrawal from the 84 route on the grounds that it was losing money provoked such an outcry in Potters Bar and St Albans that Hertfordshire agreed to intervene and reach a rescue deal with Sullivan Buses.

But TFL refused to provide financial support to maintain the Potters Bar to New Barnet section. 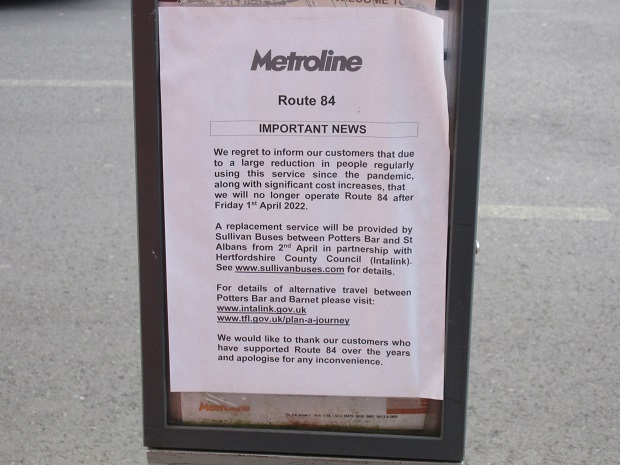 Metroline says it could not continue the 84 “due to a large reduction in people regularly using the service since the pandemic, along with significant cost increases.”

“We would like to thank our customers who have supported the route over the years and apologise for any inconvenience.”

Theresa Villiers, MP for Chipping Barnet, has asked TFL to reconsider its decision and apply to the government for a bus recovery grant.

She has also urged Barnet Council to follow Hertfordshire’s example to try to find a solution.

In its statement, TFL says it was informed Metroline was withdrawing from the route as it was no longer viable commercially.

“Passengers from Barnet can access Potters Bar on the TFL network by using route 307 and changing at Cat Hill roundabout in Cockfosters to change to route 298.

“This is covered by the Hopper fare. There is also a direct rail service between New Barnet, Hadley Wood, and Potters Bar stations.”

The alternative of having to use two buses to travel between Barnet and Potters Bar has been met with outrage by many of the 84’s regular users, especially those travelling from Potters Bar to schools in Barnet and Barnet Hospital.

Several posts express the anger of people who live around Hadley Highstone who have lost out altogether with no direct service to Barnet High Street or Potters Bar.