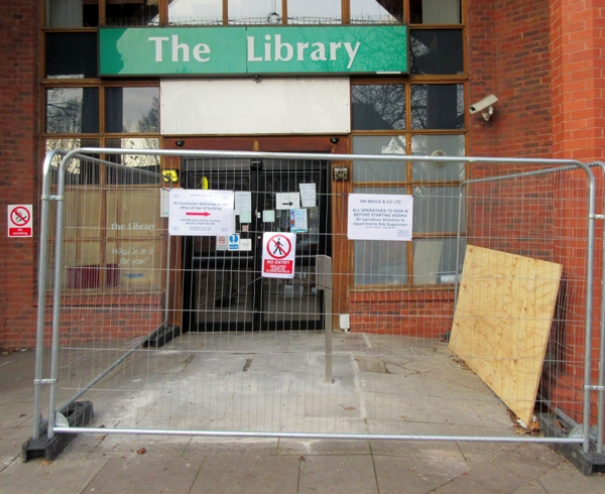 A last-minute attempt by the Barnet Society to challenge the loss of community space was unsuccessful
Downsizing of the Chipping Barnet Library – with much of the floor area being converted into commercial office space – is proceeding apace after planning permission was granted by Barnet Council.

A last-minute attempt by the Barnet Society to challenge the loss of community space got nowhere: the Society’s application to speak at the planning committee was ignored, and not even acknowledged.

Immediately after the committee’s meeting on Tuesday 17 January, scaffolding was erected to allow access into the roof space and to facilitate other construction work which will include the creation of a new mezzanine floor.

When challenged at the Society’s annual question and answer session, the Chipping Barnet MP, Theresa Villiers, defended the council’s action in downsizing the library, and the switch to largely self-service operation.

She told the meeting at the Pennefather Hall (20.1.2017) that despite the downsizing, Chipping Barnet would still have an attractive library, with substantial library floor space, and self-service operation would allow for longer opening hours.

She stressed that the current closure of the library is only temporary – the library is due to re-open on Monday 6 February after being closed since Monday 5 December.

“Self-service operation has been trialled successfully at Edgware, and it does operate successfully. The change does allow Barnet Council to keep every library open within the borough and to operate for longer hours.

I have campaigned as MP to keep all the libraries open and they will all stay open for use.

Mrs Villiers said she did not accept that members of the public would be fearful of using an unmanned library monitored by closed circuit television.

The security of users was not the problem. “The key issue is the possibility of people stealing books.”

When concerns about the safety for library users at times the building is unmanned, and operating on self-service, were raised at a recent meeting of the Chipping Barnet police committee, local representatives were told that the High Barnet Police station had not been notified of the changes taking place.

The neighbourhood police team was already dealing with problems resulting from men loitering near the band stand opposite the library, and the meeting was told that the switch to self-service operation would be monitored by the police.

Numerous objections were registered by local residents in December to the loss of community space resulting from the conversion of much of the library building to provide lettable office space with room for up to 28 employees.

In agreeing the application, the planning committee approved the “subdivision and part change of use of the library to provide office floor space, together with the insertion of a mezzanine floor” (above the Hyde Room).

The committee stated that the retained library space “shall be used as a library and for no other purpose.”

Other conditions were imposed: