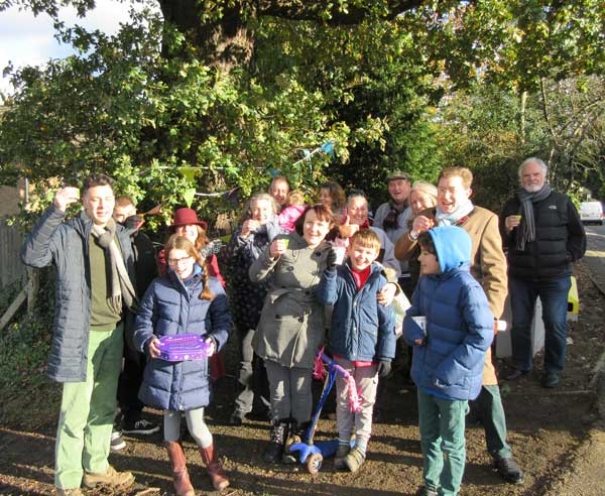 They were determined to highlight the importance of what they believe is one of the many heritage trees in and around High Barnet that need protection.

The celebration was organised by Simon Cohen who led the protest over the damage done to the tree’s root structure during the installation of junction boxes connected with the expansion of Virgin Media’s broadband network.

In a statement issued by Barnet Council’s highways department, the highways permit manager, Alexander Ryan, says that the disturbance to the roots during the excavation and installation did not cause “significant damage” to the tree and the council rejected the residents’ demand that the junction boxes should be moved.

Mr Cohen told the Barnet Society that the council’s response was disappointing.

“The fact that the roots were not significantly damaged was down to luck and not judgement on the part of Barnet Council which owns the tree and the land on which it stands.

“The highways department’s response confirms our view that there was – and is – no procedure when permits are issued for checking potential damage on environmental grounds and this was a heritage oak that clearly needed protection.

“What this incident has revealed is that Barnet Council is leaving it entirely to contractors to police themselves and abide by the rules designed to prevent excavation under a tree’s canopy so as not to disturb the root structure.

“The lack of procedures and controls underlines the need for our campaign to save and protect street trees of which Barnet has so many fine examples” said Mr Cohen.

In his statement explaining why the council has turned down the residents’ request for the junction boxes to be moved to a less prominent position, Mr Ryan said they do not affect visibility for road users or access for pedestrians.

All contractors had a responsibility to follow the guidelines and reminders were issued when work was to be carried out in the vicinity of trees.

But Mr Ryan acknowledges that although the council issued reminders, it was “not feasible to consult and monitor every excavation considering there are thousands of works undertaken each year and thousands of trees within the borough.”

More in this category: « New homes and commercial space Saving Whalebones for community use »