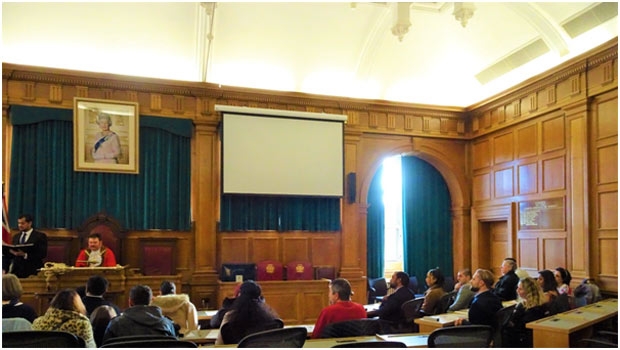 The London Borough of Barnet’s Council Chamber
The Barnet Society invites you to sign the Change.org petition below. Although the subject may seem outside our normal area of interest, it is important that we should be able to voice our concerns fully to the Council when necessary.

In cases like these, we need – if necessary – to be able to take our objections to the highest level of the Council. But if Barnet’s proposed changes go through, we will be severely restricted in what we can say.

Barnet Council are planning to change the constitution which will stop people making a public comment in person at Committee Meetings and severely limit the number of questions they can ask. The Council's Constitution and General Purposes Committee approved the following proposal on the 25 June:

Questions and comments should be amalgamated. The number of words for each question/comment should be limited at 100 and must be submitted in writing by 10am 3 working days in advance of the committee meeting.

Residents may raise one question/comment on an agenda item. The question/comment must relate to the substantive matter to be determined by the committee. No more than two questions from residents will be allowed per agenda item taken in the order of receipt by the Governance Service.

These changes means the public will no longer be able to address the committee in person and councillors will not be able to ask the member of public about their comment. When reports run to many pages, summarising a single question or comment in 100 words will severely restrict what people can say.

Before these changes, residents were allowed to ask as many questions as necessary and to speak for up to 3 minutes. After a resident's comment, committee members were able to question the resident and seek clarification on their comment. This will cease.

There was an overall time limit of 30 minutes at each committee meeting for comments and questions which residents accept is a reasonable restriction. However, if questions were not addressed within the 30 minute time limit at least there was a written record of the responses providing a clear audit trail when issues arise in the future. This will cease as there will be a limit of just 2 comments or questions per agenda item.

Barnet say this is about saving money and giving more opportunities to residents. It will do neither especially, if residents are forced to submit multiple FOI requests to get important answers. It seems clear that Barnet do not like residents scrutinising decisions such as the Council's £22.9 million loan to Saracens Rugby to build a new stand at their stadium or asking questions about the £2 million fraud carried out by a Capita employee which went undiscovered for more than a year.

Capita's performance in areas such as Highways and Pensions Administration have been dismal but public scrutiny of their performance and why they are being allowed to continue to provide such a poor service will now be all but eliminated.

The Council are also making major cuts to services such as libraries and are changing the rules to force disabled people who receive in-home care packages to move into residential care simply because it is cheaper. The ability to question these changes will be dramatically reduced, allowing the council to rubber stamp decisions without any meaningful engagement with the public.

Barnet residents have a right and a need to scrutinise the Council and these changes will eliminate that scrutiny.

The Council’s proposal needs to be agreed at a Full Council meeting on Tuesday 30 July 2019. Please sign this petition to stop these changes to the constitution as soon as possible:
http://chng.it/mpT87HjFb9

Members of the public are also invited to a meeting on the subject at 6:30pm on Monday 8th July 6.30 pm at the Greek Cypriot Centre, 2 Britannia Road North Finchley N12 9RU, organised by the Barnet Alliance for Public Services.