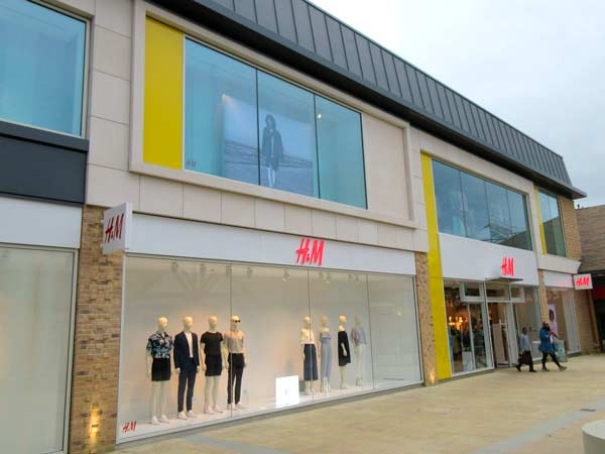 H & M in The Spires
Footfall in the Spires shopping centre is up by over 50 per cent in the first three months of this year – just one of the statistics the management are quoting to squash rumours that two leading tenants, the H&M fashion store and Carluccio’s restaurant, are thinking of pulling out.

“We have been plagued for weeks with untrue speculation,” says the Spires’ management team.

“Because of reports across the country of High Street closures, some locals seem to think that the same problems are hitting the Spires, but that’s not the case.

“The doom and gloom merchants are wrong: H&M and Carluccio’s are not closing down.”

The centre’s management team insists that the Spires’ major tenants are meeting their sales targets and there are no store closures in prospect at the centre.

“The doom and gloom merchants are wrong: H&M and Carluccio’s are not closing down.”

Cameras clock the number of customers entering and leaving the Spires and they indicate that there were 121,610 more customers in the three months to the end of March this year than in 2017 – an increase of 56.4 per cent.

“The Spires’ landlords have invested millions in the centre and all the indicators are positive.”

Carluccio’s is currently advertising on line for additional staff, and the success of the first teenage market – on Easter Saturday – was regarded as another encouraging development.

Sixteen young traders have booked pitches for the second teenage market on Saturday 5 May and they will be backed by four young musicians performing at the bandstand.

National Car Parks has given the Spires an assurance that there will be no repeat of the difficulties motorists have been experiencing when using the multi-storey car park.

Confusing and unreliable parking machines have prompted a barrage of complaints, and NCP says that in view of a breakdown in service standards, recently-imposed parking fines have been cancelled.

NCP has told the Spires that in future there will be regular checks of the machines; clearer signs and instructions for cards and cash; and whenever possible an attendant will be available to give motorists assistance.

The fashion chain H&M opened its store at the Spires in September last year following the construction of a new 24,000 square foot anchor unit at the centre.

H&M signed up for the new store after a £7 million refurbishment of the centre was announced by Hunter Real Estate which manages the Spires on behalf of the Canadian pension fund, Alberta Investment Management Corporation, which purchased the centre in 2015.

More in this category: « Topping out for hospice atrium A Premier Inn with a difference? »