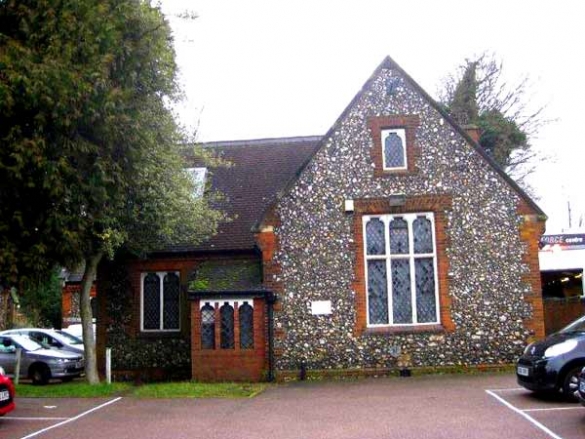 Former Red Cross building
Restoring and putting to good use Barnet’s rich heritage of historic buildings has become an increasingly challenging task which makes the story behind the project to preserve and re-open the former Red Cross building in St Albans’ Road all the more remarkable.  Ten years ago the Red Cross indicated that it intended to vacate what had once been Christ Church School and put the 169-year-old flint-faced building on the market.

Moves were immediately made within Christ Church to prepare for the possible purchase of the building which was in desperate need of repairs and which future seemed bleak.

Since the launch of the Open Door Appeal to purchase, renovate and then re-open the former school so that it can be used to support older people in the community – its ownership has now been secured by the John Trotter Trustees and plans are well underway to try to re-open part of the building later this year or early next year.

What makes the story of the Open Door Appeal such a stunning success is that within the space of two years it has managed to raise £410,000 by a combination of individual personal donations from members of Christ Church and an impressive range of fund-raising activities.

The next stage is to raise a further £150,000
so that renovation work can begin

The next stage is to raise a further £150,000 so that renovation work can begin later this year in the hope of re-opening part of the building as a daily “drop-in” facility for older members of the community.  The initial phase is to renovate a room at the rear of the main building and install a kitchen and toilets.

Long term the plan is to completely gut the interior of the main building, retaining the outer facade, and create a two-storey interior with a significant ground floor space for community use with smaller rooms and offices above a newly-installed ceiling. Upwards of £1 million will be required to complete the renovation and equip the building to offer the fullest range of services for older people.

Originally the school, erected in 1844, was used for services while Christ Church (www.ccbarnet.org.uk) itself was being built.  It was the first of the four flint-faced buildings on the St Albans Road site which together have become a much loved feature of the Barnet townscape. 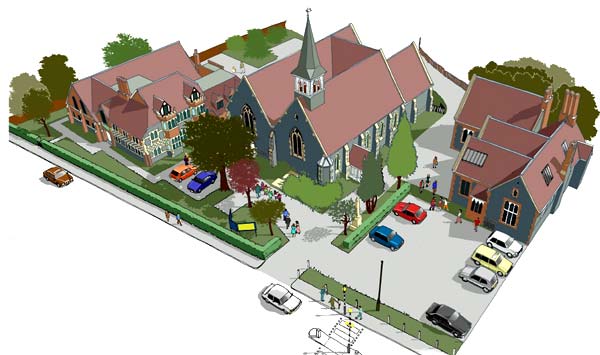 The church, with its distinctive tower, Pennefather Hall (which are both grade 2 listed buildings), the vicarage and the old school building together form an impressive landmark at the town’s north-western boundary, just before the start of the green belt.

Acquiring what later became Christ Church Girls’ School had been a long-term aim at Christ Church and finally the opportunity arose when at last the Red Cross put the premises on the market two years ago.

Christ Church faced what then seemed the monumental task of finding the £330,000 asking price but after the Red Cross agreed to postpone the sale for six months the money was raised and the purchase completed in March 2012.  The Red Cross put the premises on the market two years ago.

In the year since the purchase of the school working parties have cleared roofs, gutters and outside spaces to ensure safety of the structure before sufficient funds have been raised to enable renovation work to begin. 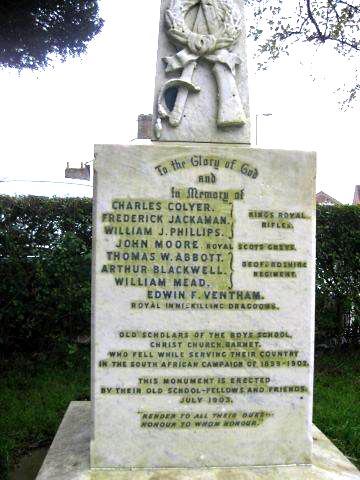 The success of the Open Door Appeal is described in its latest news letter:

“2012 – What a year to look back on...the Queen’s Jubilee and the Olympic and Paralympics Games...It was not only in the country at large where events and accomplishments exceeded expectations, here in High Barnet we threw away the rule book and managed to achieve what at times had seemed the possible – We bought the building!”

Not far from the former school is a monument, erected in July 1903, in memory of eight former pupils of Christ Church.

Underneath their names are the words: “Old scholars of the Boys’ School, Christ Church, Barnet, who fell while serving their country in the South Africa campaign of 1899-1902”.

The memorial stands as a reminder of the role which Christ Church and its school have played in the life of Barnet.