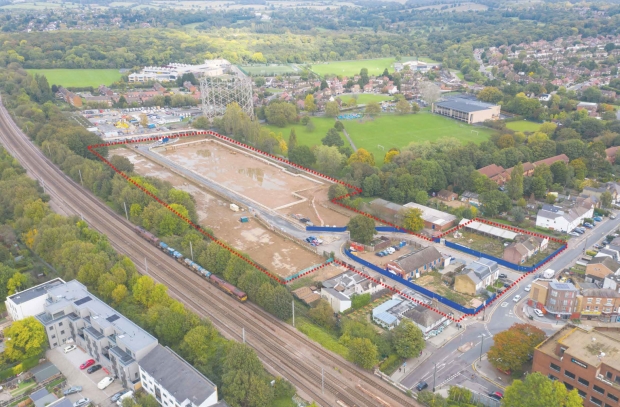 Aerial view of the former gas works site at New Barnet
After feedback from a public exhibition in January, the Victoria Quarter housing development on the former gas works site in New Barnet has been scaled back slightly by lowering the height of the proposed blocks of flats and by making a small reduction in the number of new homes. A 14-storey tower block has been cut to ten storeys and most of the blocks will now be seven storeys high instead of eight.

Joint developers Fairview New Homes and the housing assoication, One Housing Group, say that by lowering the height of the tallest tower block, as well as the overall height of the whole development, the new estate will be "less visible from a number of key views in the local area".

These height adjustments, made in response to the feedback, would create an "undulating roofline", and by maintaining the existing tree line along the eastern boundary with Victoria Recreation Ground and implementing other landscaping, there would be a green buffer and a less intrusive skyline.

The deadline for comments on the latest proposals was 27 March.  If these revised plans gain the approval of Barnet Council, construction could start in late 2020 or early 2021.

Fairview and One Housing say they are committed to ensuring that 35 per cent of the new flats will be affordable, as indicated in their breakdown for the revised project:

Fairview will offer 65 per cent of the 652 new flats for sale and of the remaining 209 affordable homes, 60 per cent will be offered by the housing association at affordable rents and the other 40 per cent in shared ownership.

In response to the January consultation, one of the commercial offices will become a coffee shop which was a popular option.

In justifying the provision of 392 car parking spaces for a development of 652 new homes, the developers say car use and ownership is in decline, especially among younger generations and first-time buyers.

Only 38 per cent of people in the local area travel to work by car -- and only 60 per cent of the residents of local flats own a car.

The former gas works site was originally purchased in 2009 as the location for an Asda superstore and it was later acquired by One Housing in 2015.  Planning permission was obtained in 2017 for the construction of blocks of flats providing 371 homes.

These proposals had to be revised upwards because the cost of work to decontaminate the site, which has been vacant for the last ten years, were higher than expected.

When combined with changes in the housing market and rising construction costs, One Housing decided its earlier plan was unviable and it entered a partnership with Fairview to nearly double the number of flats on offer and provide more affordable homes.

Remediation work, including the removal of contaminated material, was completed in November last year and a public exhibition in January was the first stage in a new consultation.

All that remains of the decomissioned gas works is the steel framework of the gasholder and it is to be kept as part of the development.

A second exhibition in March had to be cancelled because of the coronavirus crisis and comments had to be made on line to www.victoriaquarter.consultationonline.co.uk

In response to the first round of consultations, the Barnet Society said it considered the initial proposals would be "a gross overdevelopment" and that the impact of 1,300 or more new residents would be detrimental on transport, nurseries, schools, medical and other local services.

"The development lacks the diversity that such a large community needs to be sustainable -- since it is physically isolated from most of its neighbouring streets -- and would run the risk of turning into a ghetto estate."

In urging a rethink, the society said that the Victoria Quarter blocks of flats would be "highly visible" from parts of New and East Barnet, as well as from King George's Field in High Barnet.

At the first exhibition the developers said they would review their proposals in the light of any comments -- and again there is an assurance that any further feedback will be taken into account before an application for planning approval is made to Barnet Council.