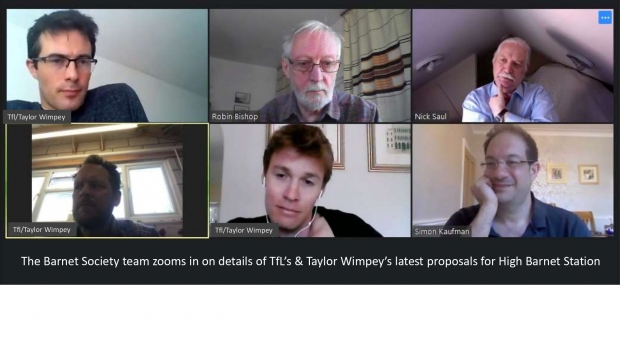 The Barnet Society has seen the latest proposals for the High Barnet Station site. Designs won’t be finalised for several weeks, but not a lot has changed since the public consultation last November.

This is the biggest planning issue for High Barnet since The Spires 30 years ago. The Society realises that, for many people in lockdown, it‘s not currently a priority. But when we emerge from the crisis, we don’t want to find a done deal.

We’re writing to Transport for London (TfL) and Taylor Wimpey (TW) to try and secure further design modifications. Unless they’re forthcoming when the application goes in, probably in May, we’ll marshall every planning argument we can against it. There’ll be another public consultation, and you’ll also be able to have your say.

In December, we were told that TfL/TW intended to submit a planning application in January, but heard nothing more until last week. Then we were invited to a video-meeting on 24 April 2020 to discuss their latest scheme. Nick Saul (ex-engineer) and Simon Kaufman (architect) joined me (a retired architect) for a two-hour session, during which we interrogated the proposals in considerable depth.

We aren’t allowed to share the emerging plans with you yet, but they don’t contain many surprises. The intention is still to build nearly 300 flats, mainly 1- & 2-bedroom, 40% of which would be ‘affordable’. They would be arrayed in six blocks up to seven stories high along Barnet Hill. The number of long-stay parking spaces (36 commuter and 20 staff) would be a fraction of the present provision.

The TfL/TW design team have clearly been working hard over the last few months. Their environmental standards and quality of building and landscape detail appear unusually high. But we remain concerned about key aspects, most notably the impact on the neighbourhood and especially on Barnet Hill.

We have several challenges. Barnet Council has housing targets to meet. If it refuses the application, Sadiq Khan can over-ride its decision. He needs to build more homes before the Mayoral elections in May 2021, and his draft London Plan encourages high-density development around transport hubs. The government doesn’t like Sadiq, but in the wake of Covid-19, constructing ‘shovel-ready’ schemes looks an easy way to kick-start the economy. Ensuring due planning process will be difficult under the present circumstances.

If you’re not already a Society member – please join us. We’ll keep you informed and help get your voice heard.