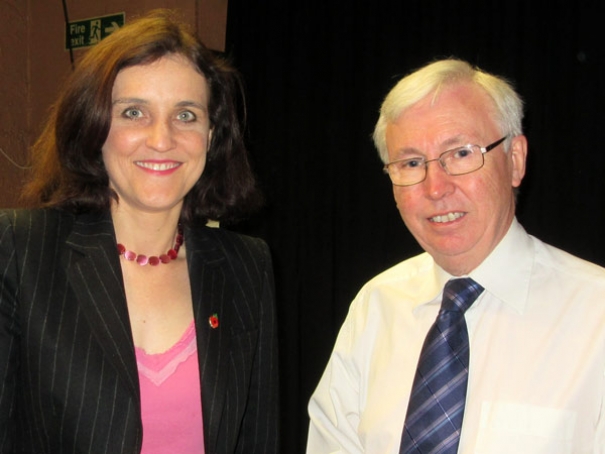 Theresa Villiers MP being welcomed by Gordon Massey, chairman of Barnet Residents Association
Theresa Villiers, MP for Chipping Barnet, who is Secretary of State for Northern Ireland, admits that that even her police protection officers cannot work out where it is possible to park in High Barnet town centre.

The parking regime is complicated and so difficult to understand that shopkeepers in the High Street are also unaware of the few places where free parking is permitted.

Mrs Villiers told a question-and-answer session held by Barnet Residents Association (7.11.2014) that she understands local anger and will ask the council to do far more to make it easier to park in and around the shopping centre.

She revealed that the council is considering repeating last year’s concession of allowing free parking in its three High Barnet car parks on the three Saturdays before Christmas.

Mrs Villiers said it was essential the council made its parking signs clearer and easier to understand and did far more to publicise the few places where free parking is permitted.

She admitted that the occasions when she was driven around her constituency by police officers were becoming a nightmare because she was so fearful of being photographed parked illegally in High Barnet.

One on occasion her car had stopped in a loading bay and she immediately told the police officer to drive on; it was only later that she discovered it was in fact one of four bays where 15’ minutes free parking is allowed between 10 a.m. and 4 p.m.

Mrs Villiers said that because the signs were so complicated and so difficult even for police officers to understand, she was now being “very careful”; she realised that being an MP and a minister meant she had a responsibility to make sure her parking was “entirely within the law”.

“But clearly the council needs to do far more to explain these concessions".

I went round the town centre with Councillor David Longstaff and we found that even traders don’t know about the changes, let alone understand them.

More in this category: « SOS our town centre is dying Packed programme for Barnet Fair »