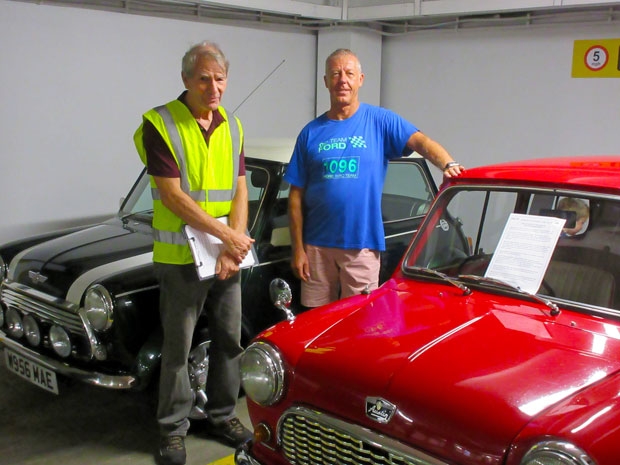 Celebrating sixty years of the mini was one of the attractions at the sixth Barnet Classic Car Show. Chris Nightingale (left) with Derrick Haggerty, owner of a red 1960 Austin Seven mini, one of only around 100 still in working order.
Some last-minute polishing and then bonnets were up, engines ready for inspection, as enthusiasts crowded into the basement of the Spires car park for the sixth annual show of the Barnet Classic Car Club.

A weather forecast warning of a wet afternoon forced the organisers, Chris and Diane Nightingale, to switch the location from the open-air top deck of the car park to the basement, but the close proximity of vintage and classic cars – and their fans – added to the conviviality of the show.

Over fifty cars and motorcycles descended to the basement after a parade through Barnet High Street and initially the smell of petrol fumes was rather pungent, but as the enthusiasts said, it would not be a classic car show without some smoke from the odd exhaust.

A special feature this year was a 60th anniversary celebration of the mini – and pride of place went to a 1960 red Austin Seven Mini owned by Derrick Haggerty who rescued the rarely used car from a garage in Southend eight years ago.

“The first mini came off the production line in August 1959 and mine was first registered in August 1960, and we think it’s only one of around 100 of that vintage which is still in working condition.

...as the enthusiasts said, it would not be a classic car show without some smoke from the odd exhaust

“The lady who owned the car hadn’t used it since 1973 and it had been in her garage ever since, until I heard via the friend of a friend and had the chance to buy it in 2011.

“The car’s last MOT was in 1973, with 47,000 miles on the clock. All that needed to get her going again was cleaning her up, fitting a new battery and brakes, and she passed the MOT straight away.”

Next door in the display to Mr Haggerty’s mini was a green 2000 Mini-Cooper sports car, the last mini to be produced.

“The Ford Mustangs are modern classics and becoming collectors’ pieces,” said Mr Digweed.  Chris Nightingale said the wet Sunday afternoon forecast meant that there were a few absences among the 60 cars that were due to attend. 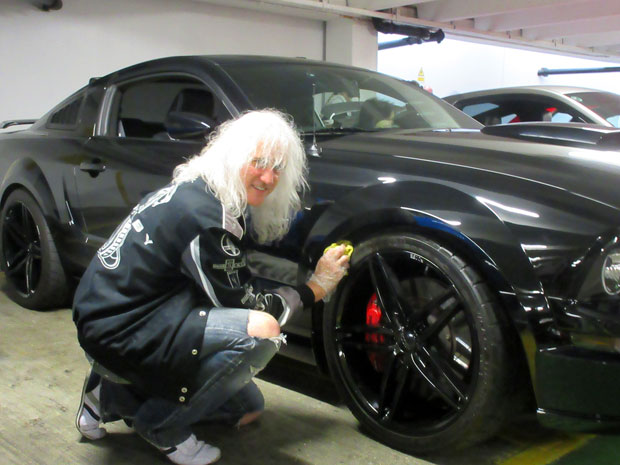 “Heavy rain was forecast from lunchtime onwards so at 9am we switched location from the top deck of the car park to the basement.

“We had to think of the owners of some of the open-topped sports cars who would have been reluctant to have their cars on show outside in the rain. Nonetheless it was very successful and enjoyable event down in the basement.”

Among the other attractions for the day was the Barnet Teenage Market set up beside the Spires’ bandstand. The monthly market had been delayed until September 22 in order to take advantage of the crowds expected for the classic car show.

Bob Burstow, secretary of the Chipping Barnet Town Team, who led the campaign to establish the teenage market, said the monthly market had become well established in the 18 months since it was launched.

As from December, six of the stalls will again be taken by teenagers sponsored by the Barnet Young Enterprise, a charity which helps 14-16-year-olds to launch an enterprise and set up their own company.

“There were several Barnet Young Enterprise stalls in the last academic year, and we hope for more again from December. The teenage market can provide an all-important sales outlet for the youngsters once they have set up a business and want somewhere to trade from.”

Published in General News
More in this category: « New centre for swimming and keep fit The Ark, Barnet: “best children’s hospice in the world” »