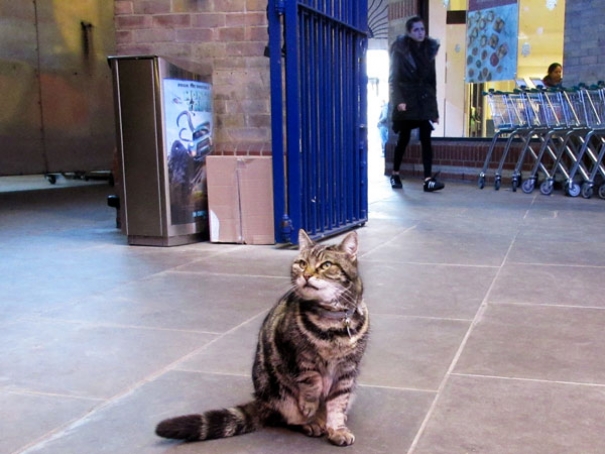 Millie stations herself outside Waitrose ready to acknowledge the strokes of her many admirers
Millie the Waitrose cat, already dubbed High Barnet’s most sociable feline, has been inundated with good will messages after shoppers at the Spires were told she had recently had a pre-Christmas tummy upset after being given too much unwanted food.

Millie, a 16-year-old tabby, has become an online sensation – on You Tube and other social media sites -- because of her habit of sitting outside Waitrose and other nearby shops, waiting to be stroked by her adoring admirers.

Sometimes her sociability gets the better of her and, on occasion, she has had to be escorted out of the supermarket, apparently after heading for the fish counter.

In previous years Millie was known as the “library cat” – after having made a beeline for the comfort and calm of Chipping Barnet library, which had to resort to putting up a notice saying, “Don’t let the cat in”. 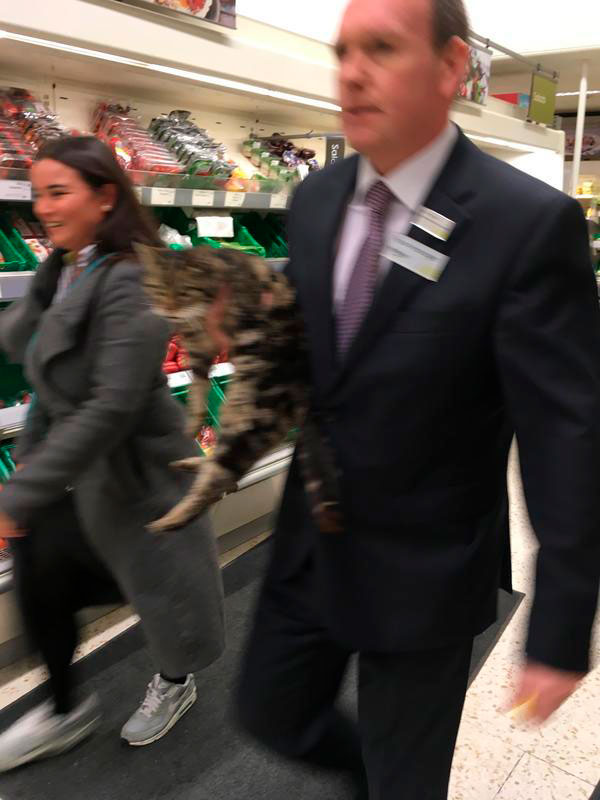 Gemma Wilkinson’s snap of Millie being ushered out of Waitrose is a hit on the Next Door Barnet community websiteOwner, Paula Gabb, who lives in Carnarvon Road, just across from the shopping centre, has appealed to well-wishers to stop trying to feed Millie because she has recently had diarrhoea, and the vet blames it on food being left by shoppers.

Since Millie’s plight was aired on the community website Next Door Barnet, Paula has received 35 replies – and they are still being posted – all giving advice, and wishing Millie well.

The consensus – and Paula agreed –  was to fit a “Please don’t feed me” collar around Millie’s neck and hope that does the trick.

The conversation stream on Next Door Barnet tells the tale of Millie’s misfortune.

Well wishers describe how they try to persuade other shoppers not to leave food for Millie, but passers-by feel so concerned they put down a wide variety of titbits, ranging from salmon, cheese to tinned cat food.

Paula has thanked all her respondents, and as well as fitting a special collar, says she is trying to take Millie back home whenever she finds her in the Spires.

The trouble is that whenever she lets the cat out, Millie heads straight back to Waitrose, and as the Barnet Society reported in its first post about Millie in September 2016, she regularly stops the traffic at the zebra crossing outside the library as she heads for the Spires.

“I was in Savers the chemists the other day and spotted Millie on the shelves snoozing on a pile of dusters,” said Paula.

Another online correspondent reported seeing Millie asleep in Savers “having made herself comfortable in a basket of hot water bottles.”

“Millie is a legend – I feel like writing a kid’s book about her” says one admirer.

There is universal praise on Next Door Barnet for the best snap of Millie by Gemma Wilkinson showing “Millie being escorted out of Waitrose” – a Waitrose manager was snapped rushing to the door with an armful of feline mischief!