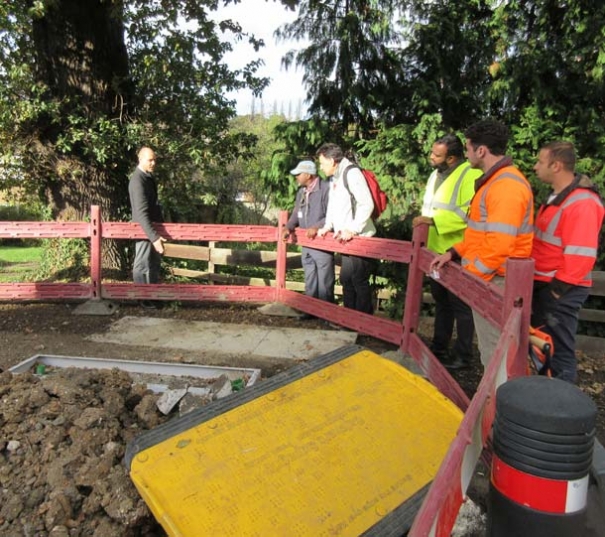 Frederic Micoud, Barnet Council tree officer (far left) examining the test pit under the oak tree as local residents and contractors look on.
After protests from local tree lovers, Barnet Council finally called a temporary halt to trench digging and cable laying directly under a 250-year-old oak that commands the brow of the hill at the junction of The Meadway and Potters Road, New Barnet.

A test pit was dug in the presence of council officials to assess the damage to the tree’s root structure following the excavation of a four-foot deep trench and the bases for three concrete platforms for broadband junction boxes.

After he had carried out an inspection, Frederic Micoud, Barnet Council tree officer, told the Barnet Society that although fibrous roots had been cut through, there seemed no damage to structural roots so there appeared to be no immediate threat to the tree or its stability.

“What has happened is not ideal, and it shouldn’t have happened. We will now carry out a full assessment of the tree’s health next spring to see if there has been any lasting damage.”

While acknowledging the tree officer’s judgement, the lead local protestor, Simon Cohen, a campaigner for the Woodland Trust, said it was unforgivable that Barnet Council had given approval to contractors for Virgin Media and the UK Power to site a major broadband junction directly under the canopy of a much-loved local tree.

“We want to know how this was approved in the first place by the highways department when both the tree officer and the highways officers who attended in person said work of this kind should not have been permitted directly under a tree canopy, so close to the trunk.

“They both thought the junction boxes could easily have been sited away from the tree’s canopy without the damage that has been inflicted to the oak’s fibrous and anchor roots.

This tree is a very special landmark.

“This tree is a very special landmark. It’s on highways department land and is under the council’s protection, but sadly that seems to have counted for nothing, and local residents deserve a proper explanation of how it all went wrong and ended up posing a real danger to the tree.”

The mighty oak saga began when Judy Ross, who lives opposite the tree, saw a mechanical digger from the John Henry Group digging the trench for Virgin Media which has been working in the area for some months extending its fast broadband network.

She alerted Mr Cohen who asked the contractors to stop so that they could check with their head office that permission had been given.

The paperwork was in order, but the contractors were using a mechanical digger which is banned under the guidelines because it compacts the ground,

When Mr Cohen saw that some roots had been hacked through to complete both the trench and the excavations for the concrete platforms, he complained to Barnet Council which then said work should be halted so that a site meeting could take place.

While this was being sorted out, the UK Power group dug a second 13-yard long trench along the pavement and beside the tree to connect power to the broadband junction boxes, necessitating the installation of temporary traffic lights. This trench was hand dug to minimise root disruption.

This was inspected by Mr Micoud. He wanted to see if any roots the thickness of a thumb had been cut through. He found numerous fibrous roots had been broken, but he thought the damage was not enough to endanger the tree.

He told Mr Cohen and nearby residents that he would report back to the council’s trees and woodlands manager and would make a point of inspecting the tree next spring.

“If a tree has been damaged it might have to be reduced in size and in some circumstances cut down and that can be very costly for contractors who fail to observe the guidelines when working under protected trees.”

Mr Cohen said it was ironic that because the oak was owned by the council it was not covered by a tree protection order, when if one had been in place it might have rung alarm bells among the tree officers and highways department staff.

“Barnet Council needs to sort out how this happened. How was it that Virgin Media were given permission to lay these cables and broadband boxes directly under the canopy of such an important local tree?

“Virgin Media are doing extensive work in and around High Barnet and we need better procedures to prevent further damage.”

Mr Cohen says the row over the mighty oak is proof if proof was needed that residents should support the Woodland Trust in its “We Love Street Trees” campaign.

More in this category: « Underhill school to go ahead New homes and commercial space »