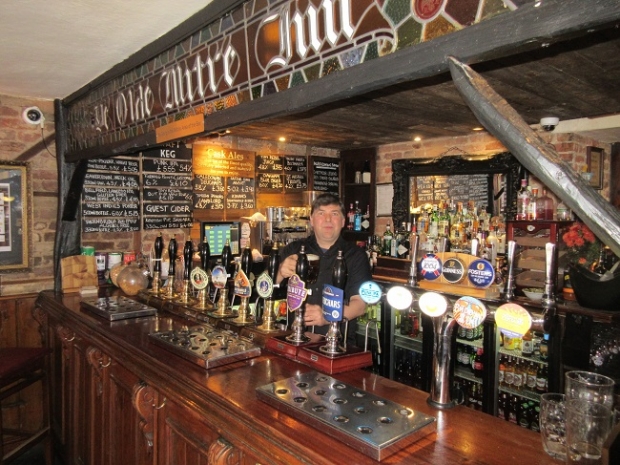 Mitre mine host in happier, pre-coronavirus days
High Barnet publican Gary Murphy, licensee of the Mitre, is at the forefront of a campaign by landlords to force pub owners to back down and agree to a rent freeze while the coronavirus lockdown continues. Greene King charge Mr Murphy £8,000 a month in rent. Unless it is suspended, he fears that he and other landlords will end up thousands of pounds in debt.

Sitting unsold and going to waste in the Mitre's High Street cellar is £6,000 worth of real ale and other beers that have either passed their sell by dates or are now undrinkable.

Mr Murphy has fuloughed seven of his staffe -- with the government meeting 80 per cent of the pay -- and he has redeployed another employee to do maintenance.

He will also benefit from the government coronavirus grant scheme -- of between £10,000 and £25,000 -- for shops, pubs and other small traders, depending on their rateable value.

"I am waiting to hear from Barnet Council how much the Mitre will get. Although this will help, my debts are piling up, which is why a rent freeze is going to be so important."

The Pub Owners Network is urging the leading pubcos to take urgent action to resolve the uncertainty and freeze rents.

So far only Admiral pubs have cancelled rents during the lockdown, but five major pubcos -- Greene King, Enterprise Inns (Stonegate), Marstons, Punch Taverns and Star Bars and Pubs (Heineken) -- have all refused.

Greene King told the Daily Telegraph that it had deferred rent on its pubs to help landlords with their cash flow and would support them on a one-to-one basis once the crisis was over.

Mr Murphy said Greene King had failed to acknowledge that the rent remained a debt that would still have to be paid.

"In my case, as a Greene King tenant, a three-month shutdown would leave me £24,000 in debt -- on top of all my other outgoings such as electricity, rubbish collection and loads of other standing charges.

"Some of the pubcos are indicating they might offer a percentage discount on the rent of up to 50 per cent, but there are 1,000 Greene King tenants like me across the country who haven't been offered anything.

"If necessary, the Pub Owners Network will challenge Greene King in court. I dont have just a lease on the pub, but also a purchasing agreement for their products and clearly that isn't being honoured.

"We might also have to challenge them over who is responsible for insurance. Greene King insure the property, but a landlord insures against the risk of an operational closure, but the insurance companies insist that a pandemic like this isn't covered."

Mr Murphy remained optimistic that the Mitre would survive and see the return of his regular clientele.

"By hook or by crook we will get through this, but I fear that many other Greene King tenants might not be so fortunate and will struggled to re-open, even with the government help.

"There is no way that many pubs will be able to repay thousands of pounds in outstanding rent, which is why I am doing all I can to support the Pub Owners Network."

Mr Murphy explained that he could not have given away the beer that has passed its sell by date because duty would still have had to be paid. Brewers are offering to replace unsold beer with fresh supplies.