Clamped! how petition spurred council to give up fight 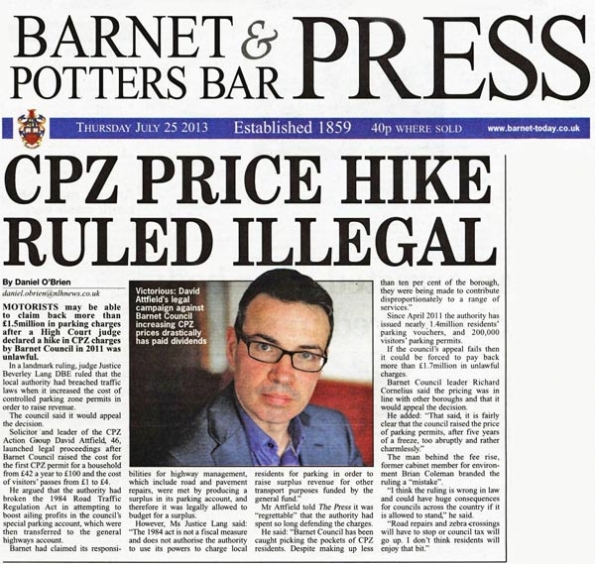 Hundreds of Barnet residents called on the council to stop wasting even more council taxpayers’ money in trying to appeal against a ruling by Mrs Justice Lang.

In her judgement (22.7.2013) she said that Barnet Council did not have the legal authority to raise surplus revenue for other transport purposes by increasing parking charges on local residents.

She ordered the council to repay the CPZ parking charges and costs of East Finchley resident and solicitor David Attfield, who started legal action in 2011 after the cost of permits was increased from £40 to £100, and vouchers for visitors from £1 to £4.

Barnet CPZ Action group, led by Mr Attfield, had argued that the increases were unfairly loaded on to the 10 per cent of Barnet residents who live in a CPZ.

Mrs Justice Lang rejected Barnet Council’s application to appeal but after the hearing the council leader Richard Cornelius initially said that it would challenge the judgement.

I’m delighted the council has decided not to appeal. I think it’s the right decision legally and morally

Because there were procedures under which Barnet Council could have made an application to the Court of Appeal, the petition organisers said it was time call a halt to any further costly legal challenge. That has now happened.

The organisers claim that councillors must have known all along that they were likely to lose the case but were still ready to spend £100,000 on a High Court hearing, nevermind the costs of an appeal. Now their petition has had the desired effect on the council, which bowed to the inevitable in withdrawing any prospective appeal.

Mr Attfield said after the counci's rethink: “I’m delighted the council has decided not to appeal. I think it’s the right decision legally and morally - we didn’t think they had an appeal case because the law is quite clear.”

Published in Petition
Tagged under

More in this category: Barnet Council finally backs down after High Court defeat »