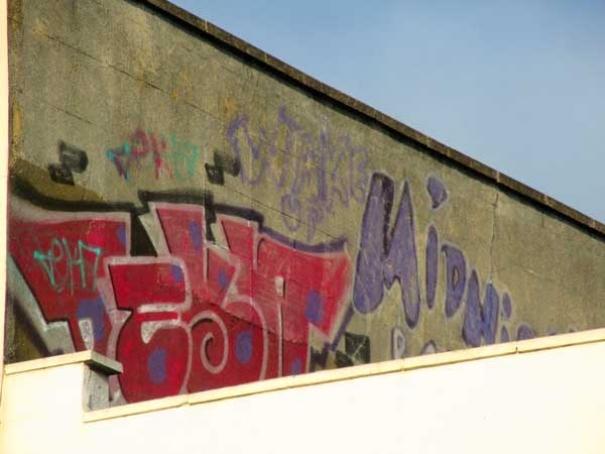 The handiwork of High Barnet’s graffiti artists is visible above shops such as Specsavers and Greggs’.
Graffiti daubed on walls and the sides of buildings in and around High Barnet has become an increasing eyesore in the opinion of residents who ask the Barnet Society why there has been no attempt in recent months to mount a clean-up.

Barnet Council and Transport for London are both under fire for failing to take action despite repeated requests.

Property owners along the High Street are also under attack for their failure to remove graffiti from prominent places on the walls of upper floor of retail premises and empty shops.

Some of High Barnet’s graffiti artists clearly have a head for heights as walls have been disfigured high above shops such as Specsavers and Greggs’ the bakery.

Nine councillors in wards along the Great North Road have all been asked why no effort has been made to remove the graffiti on the walls of the London Underground bridge at the foot of Barnet Hill.

Transport for London have similarly been urged to clean up the bridge.

Local resident Mary Cannon says the brickwork of the bridge was graffiti-free for many years, but since last year there has been a spate of daubing in and around the High Road junctions with Underhill and Station Road.

The rear of New Barnet fire station has also been disfigured.

“I have lived in Barnet for nearly 30 years and have been shocked to see our streets become shabbier and shabbier in recent months,” she said.

Another indignant resident Simon Atkinson hoped that despite the current financial constraints Barnet Council could remove some of the graffiti, or at least put pressure on the property owners.

More in this category: « Tardis sparks fury For and against wider High Street pavement »
back to top