Faster times from High Barnet to Cockfosters and Edgware 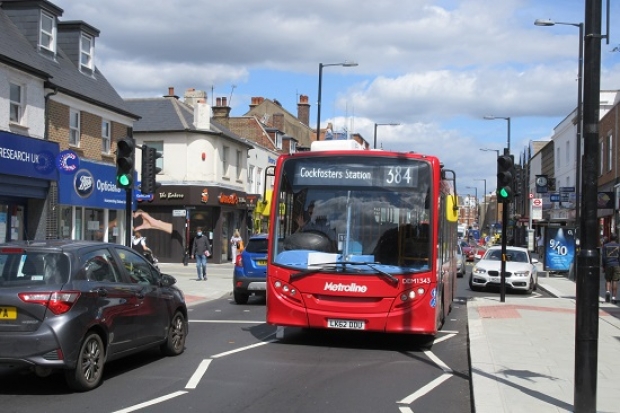 By shortening its route through New Barnet and High Barnet, Transport for London is hoping to give "a new lease of life" to the 384 bus service, by ensuring faster travelling times and by providing a new direct connection to Edgware.

In a live online debate – instead of a promised public meeting – Transport for London mounted a strong defence of changes to the 384 service that are due to take effect from Saturday 29 August, just days before the start of the new school term.
Geoff Hobbs, TFL’s director of public transport service planning, faced a barrage of questions and was forced to acknowledge the strength of the “Save the 384” bus route campaign backed by Theresa Villiers, MP for Chipping Barnet, London Assembly member Andrew Dismore and several Barnet councillors.
“The passion that the ‘Save the 384’ campaign brings with it is exciting...if only we had the same level of interest in using the bus itself,” said Mr Hobbs.

He told the webinar (20.7.2020) that there were only about four passengers on the 384 at any one time – much lower than the average use of 14 passengers per bus.
Transport for London believed the reason for the lack of patronage was that the 384 currently took 40 minutes from Cockfosters station to Barnet Hospital, which was a “relatively long time for such a short distance”.
On the new route, ten streets will no longer be served by the 384, including Strafford Road in High Barnet; Gloucester Road, Lyonsdown Road, Longmore Avenue and York Road in New Barnet; East Barnet Road, Brookhill Road and Crescent Road in East Barnet; and Castlewood Road and Northfield Road in Cockfosters.

Shortening the route from Cockfosters to Barnet Hospital “should reduce journey times by nine minutes and this should improve its popularity”.
The extension of the route from its current terminus at Quinta Drive to Edgware bus station would be via Barnet Road, Barnet Way, Selvage Lane, Hale Lane, and Station Road.
“By extending the 384 to Edgware we can reduce journey times from the west of the borough to Barnet Hospital by 20 minutes,” said Mr Hobbs.
“This way we think we can make more of the 384 route and provide it with a new lease of life, given it is not terribly well used. We can make the 384 more useful by speeding up journeys.”

Mr Hobbs said TFL hoped there would be a 30 per cent increase in passengers on the route, and together with changes to the routes of the 292 and 606, TFL hoped to add 24,000 additional route miles without any additional net cost to the three services.
Joshua Yates, who organised the “Save the 384” campaign through a Facebook page, challenged Mr Hobbs on the impact the withdrawal of the bus service would have on streets in New Barnet where residents would face a long walk to the nearest bus stop.
In hilly areas towards Cockfosters passengers would have to walk an additional 630 metres. Mr Hobbs insisted that the average additional walk resulting from the new route was 160 metres.
“An average additional walk of 160 metres is one of the trade offs we have to make. We want to make the bus route more useful to more people.
“We are seeing a decline in the use of the 384 over the last five years which pre-dates the cut in frequency five years back.”

When asked why the Cockfosters-bound buses were being rerouted down the full length of Salisbury Road rather than Strafford Road, Mr Hobbs said it was a shorter route and as a result there would be “less probability of noise, vibration, accidents and air pollution”.
Similarly, the withdrawal of the stop outside New Barnet station would eliminate the need for buses to turn into the station entrance and speed up the service. There would be a 200-metre walk to the Station Road bus stop but TFL would try to make the interchange “as good as possible”.

TFL’s timing of the route change was defended by a community partnership official, Heather Preen, who denied there had been any attempt to “sneak anything out” by announcing the decision in April during the coronavirus lockdown.
The decision was one of a number made at the beginning of lockdown and an online consultation with objectors had been arranged via Zoom when it proved impossible to hold a public meeting.

In responding to the webinar, Mr Yates said he believed the whole exercise had been a farce since TFL always intended to “steamroll these changes through” whatever the level of opposition.
TFL had effectively rundown the clock on the three-month time limit for challenges to reach their chosen implementation date of Saturday 29 August.

Published in General News
More in this category: « Bird lovers delighted to see swifts swooping over High Barnet Elstree predicted to be a new "British Hollywood" »