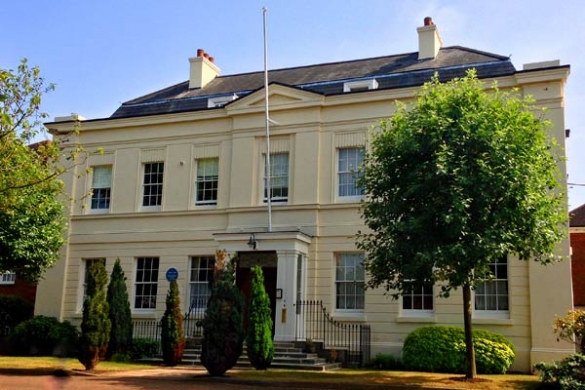 The old Victoria Hopsital now appartments on Wood Street
For well over 60 years the Victoria Maternity Hospital served the people of the Barnets, but today there is scant recognition of the vital role it once played in the area.

Surely the time has come to establish a more lasting tribute to a building that, for so many past and present residents, must evoke the happiest of memories. Perhaps this is also the moment to discover and note the names of famous people whose birthplace was recorded as Wood Street, Barnet. 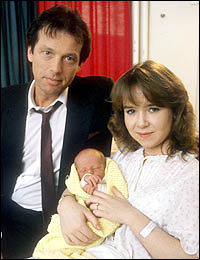 If you know of personalities and other people of interest who were born in the Victoria, please give details in the comment box below.  Perhaps you worked at the hospital – or you may know a friend or relative who did – and have a tale to tell about the daily goings-on in a maternity hospital which at its busiest had 48 beds and 48 cots.

Was the last celebrity to “give birth” at the Victoria Maternity Hospital the EastEnders character Michelle Fowler (Susan Tully)? Scenes from the BBC soap, produced at Elstree, have often been filmed in the locality and by all accounts the episode showing the “birth” of Vicki Fowler did include footage from Barnet’s maternity hospital.

Vicki Fowler was “born” in 1986 – the year before the hospital’s closure – and the story-line created quite a stir. Michelle Fowler was 16 and the father was one of the lead characters, Dennis Watts (Leslie Grantham), who was dubbed “Dirty Den” by the tabloid press.

The 1986 Christmas edition of EastEnders, in which Den served divorce papers on his wife Angie (Anita Dobson) at the Queen Vic, attracted a record UK audience of over 30 million viewers, and Michelle’s decision as a teenager to have the baby rather than an abortion, was commended for being “a very positive story-line” by Mary Whitehouse, an arch critic of television standards.

Michelle Fowler was 16 and the father was one of the lead characters, 'Dirty Den'

How do you think it might be possible now to provide a more fitting memorial to such a well-loved Barnet building, which remained a focal point of the town until its closure in 1987 and conversion into residential apartments?

Again the Barnet Society would like to hear your views. 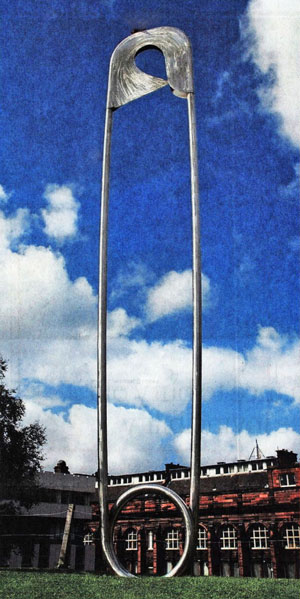 For example, could Barnet follow the path of Glasgow, which commemorates the site of the Royal Maternity Hospital in Rotten Row – once the largest maternity hospital in Europe – with a large stainless-steel nappy pin?

George Wyllie’s sculpture ‘Mhtpothta’ (maternity) is part of a garden established by the community of the University of Strathclyde to celebrate the thousands of lives that began in Rotten Row; the gardens were opened by the Provost in June 2004.

In Barnet, there is a blue plaque on the wall of what was once the Victoria Hospital – the original cottage hospital for Barnet and district – which became the Victoria Maternity Hospital in 1949.

In the brickwork of a flower bed in front of what are now the Cattley Close residential apartments, there is a foundation stone, dated 18 October 1923, which was laid by Mrs Stanley Baldwin when the Victoria Hospital moved from Barnet Hill and was re-established in Cedar Lawn, formerly an elegant Georgian house fronting on to Wood Street.

Mrs Baldwin’s visit must have been quite a moment for Barnet: her husband had been Prime Minister for only five months, having succeeded Bonar Law, who had resigned in May 1923; Baldwin then took the Conservatives to victory in the 1924 general election.

Cedar Lawn was originally the home of the botanist William Cattley, and a second plaque commemorates his residency.

He lived there from 1799 to 1835 and specialised in the study of orchids.  The house was built in 1766 and was re-fronted with white stucco in the early 19th century.

But the two blue plaques hardly do justice to the special role that the building played in the life of the Barnets, as first a cottage hospital and then a maternity hospital.

The saddest sight of all is the deteriorating condition of the original 1923 foundation stone.  Because of green algae disfiguring the stone work – and the positioning of a flower-bed in front of it – the inscription is difficult to read.

Surely such a historic artefact – marking Mrs Stanley Baldwin’s visit to Barnet – should be properly preserved in Barnet Museum.  After all, this October will mark the 90th anniversary of the hospital’s opening in Wood Street.