A planning application that had been expected several months ago to build blocks of flats around High Barnet tube station has been delayed further amid speculation about the future of several other similar developments proposed by Transport for London.

Theresa Villiers, MP for Chipping Barnet, says she understands the project has been paused and that an application has been “shelved until next year”.
Other London Underground tube stations where car park housing developments have been paused are said to include Cockfosters and Colindale.

Revised plans to build over the High Barnet tube station car park and surrounding land were unveiled in November 2019.
A joint application by TfL and their developers Taylor Wimpey was due to be made to Barnet Council in mid-June. Construction was due to start in early 2021.

In a statement issued on their behalf, the development team apologise for the uncertainty about the project but insist that a planning application is being prepared and will be submitted.

"We apologise for any uncertainty due to the impact of coronavirus and delays this has caused, but following our programme of engagement and consultation with residents, local community groups and local and professional stakeholders, we are finalising our proposals.

"On resumption of the project, we will be able to provide a more detailed update."

Ms Villiers says the pausing of the project until 2021 is “good news” for the Hands Off High Barnet! campaign and other groups opposed to the loss of most of the tube station’s car park spaces to make way for 292 flats in six tower blocks.
“Sources at TfL are saying the Mayor of London’s proposal to build over the High Barnet car park has been shelved until next year.
“I have been campaigning strongly against this plan and I welcome the postponement of the planning application which was expected imminently.
“I will keep up the pressure to stop the station car park building plans at High Barnet, Cockfosters and Arnos Grove,” said Ms Villiers. 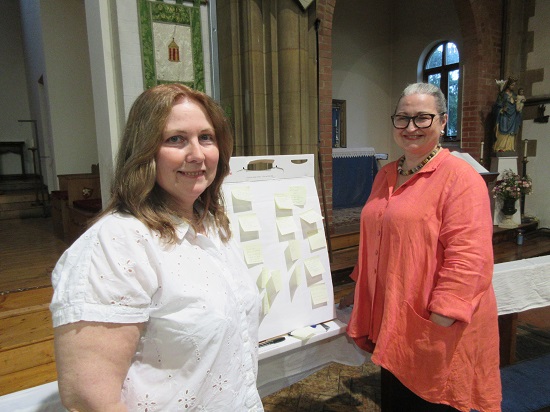 Gaynor Bond (right), who founded Hands Off High Barnet! with Kim Ambridge (left), welcomed the news that the High Barnet and Cockfosters applications had both been paused and she hoped there would be similar pauses on developments at Arnos Grove and Finchley Central.
Sadiq Khan, the Mayor of London, was forced to announce in mid-October that capital spending projects were to be paused in the light of TfL’s financial difficulties.
Car park redevelopments were included because they were to be part funded by TfL.

Ms Bond said that Enfield councillor Alex Georgiou was told that the Cockfosters project had been paused and they now understood High Barnet was in the same position, but so far the campaign had not heard directly from either TfL or Taylor Wimpey.
She believed that the High Barnet and Cockfosters campaigns were succeeding in their argument that closing the car parks would result in a considerable loss of revenue for TfL and result in considerable inconvenience if space for park-and-ride passengers was withdrawn.
“We will keep up the pressure to force TfL to abandon these schemes. We hope common sense will prevail and the decimation of much needed car parks of TfL stations will not go ahead.”

The Save Cockfosters campaign says it believes TfL would receive more revenue by keeping the tube station open and encouraging more park-and-ride use.
Instead of helping to fund the building of tower blocks in these joint ventures, TfL should accept that “in a post-Covid environment demand for tiny flats crammed into high-rise flats will diminish” and the campaign believes this will force TfL to reconsider its plan to co-fund these projects.