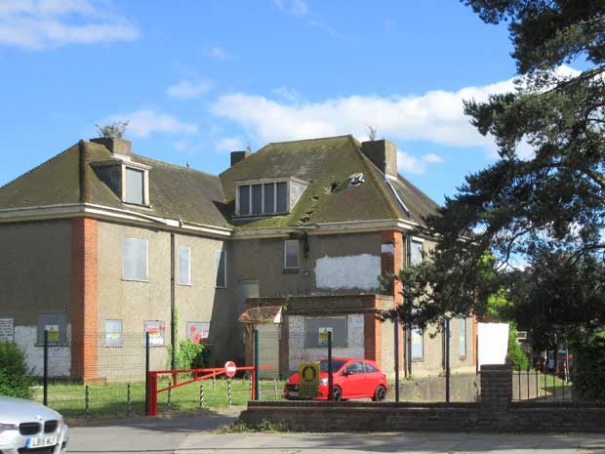 The old Marie Foster building on Wood Street
After lying abandoned and derelict for years the former nurses’ home in Wood Street, Barnet, is to be demolished to make way for a new care home for the elderly to be built on the Marie Foster care home site.

Signature Care Homes, which is about to open a new care home at Bushey, has purchased the site from NHS Property Services, and hopes by mid-July to release more details about its proposed new care home in Barnet.

Initially the NHS marketed the two-and-a-half site for potential residential development, with space for 81 news homes, but the “For Sale” sign came down some months ago, and Signature Senior Lifestyle has been revealed as the purchaser.

There was speculation last year that the site might be attractive to a care home provider because it was said to be ideally placed – close to Barnet Hospital, Barnet town centre, and transport connections for staff and visitors, offering numerous bus routes and access to London Underground.

Signature Care Homes say the new care home would offer “a mixture of accommodation types” and a range of communal facilities for residents. Other nearby Signature care homes, at Hertford and Brentwood, offer a range of studios and one-bed apartments with a café and dining facilities.

New-build care homes tend to offer anything from 60 to 80 beds, sometimes even more, depending on the size of the site.  Signature intend to hold a public exhibition in Barnet in mid-July – July 12 is a possible date – when more information will be released.

The company wishes to work with the community in proposing “an attractive, high-quality development” and a “relaxed and caring setting for residents.”

The Marie Foster site is in the middle of the Wood Street conservation area with historic alms houses opposite and other nearby listed buildings, which together form a highly-desirable location for either new housing or a care home.

While there was general approval last year when the site was put up for sale – raising the prospect that what was once a nurses’ home for the former Barnet Maternity Hospital might finally be demolished – there was concern at the scale of the residential development that was mooted.

There will be considerable interest once Signature indicate the size and scale of the new care home and the configuration of new buildings and access roads.