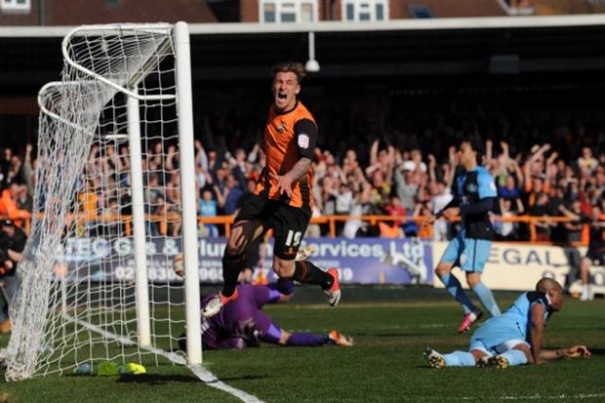 Last match at Underhill
Underhill stadium, home ground of Barnet Football Club for over a century, is to be sold.  News that the club’s chairman Tony Kleanthous has put the Bees’ former stadium up for sale will be a disappointment for the campaign Back2Barnet that has been fighting to get professional football restored to the town.

Barnet FC played its last home fixture at Underhill in April last year and has spent its first full season at the club’s new stadium at the Hive Football Centre in Camrose Avenue, Edgware.

In an interview on the club’s website www.barnetfc.com Mr Kleanthous says he is now looking to sell the Underhill site because Barnet Council has made no move towards resolving a disagreement over a possible lease for the additional land that would be needed if Underhill was to be redeveloped to allow future expansion in its limited capacity of 4,057 spectators.

Mr Kleanthous delayed the announcement until after the local council elections to see whether the Back2Barnet campaign would have any success.

“I have waited to give local supporters every opportunity to influence the councillors looking to get elected but have not seen much activity.

The Bees belong in Barnet

“Ultimately we would all like to be in Barnet but this will require a concerted effort from a sizeable group of supporters and without them to lead the way I’m not too sure whether enough have the appetite anymore.”

When he was asked whether the money from selling Underhill was needed to pay for the club’s new training ground and stadium at the Hive, Mr Kleanthous said the building work was “all practically paid for” and had been funded by a further cash injection of nearly £7 million from himself, some grant funding and also bank financing which he had personally guaranteed.

Underhill has been used recently to stage London Broncos’ under-19 rugby league matches and this had kept the facilities ticking over. “But it is clearly deteriorating fast and the cost of maintaining the old stadium seems disproportionate.”

Harrow Council agreed in 2012 to grant Barnet FC a ten-year lease on the Hive in the Prince Edward playing fields at Canons Park, Edgware, allowing professional league football to be played there for the first time from the start of the 2013-14 season.

Barnet FC was established in 1888 and the end of the town’s long association with professional football was seen as a sad loss. Some fans have continued to campaign for the club’s return through the Barnet FC Supporters’ Trust www.bfctrust.co.uk.

Its Back2Barnet campaign leaflets have the slogan “The Bees belong in Barnet!” and carry a reminder of the last home fixture at Underhill which was on 20 April 2013 against Wycombe Wanderers in the npower League 2.

“Barnet supporters packed Underhill to say farewell to a stadium that has been the home of our club since 1907 ... The community will be losing a club that has provided recreation and entertainment to thousands of people of all ages and from all walks of life for over a century.

However all is not lost. The move of Barnet FC’s first team games to the Hive is a temporary arrangement with a ten-year time limit.

The club still needs to find a permanent long-term home. Barnet FC Supporters Trust is determined that this home should be in Barnet.”

The Barnet FC Supporters Trust told the Barnet Society it hoped the proceeds from the sale of the Underhill stadium would be held in reserve to help pay for a new football ground either in Barnet itself or within the London Borough of Barnet.

A spokesman for the Trust, said the Back2Barnet campaign would continue to try to get professional football being played once again in the town.

"The loss of Barnet FC is the community's loss and we will carry on as long as it takes to get the club playing again in the town. We aren't going to go away."

In a fresh big to get improved relations between the club Chairman and Barnet Council the Trust's representatives hope to meet the three newly elected councillors in the Underhill ward.

"The sale of the stadium is not unexpected but if the site is to be redeveloped we hope it can done in a way which provides a benefit to the community. We hope we can persuade the council to allocate a future site for a new stadium.

We want the club and the council to have a positive vision for the future."

More in this category: « Barnet Football Club The “Bees” could return »