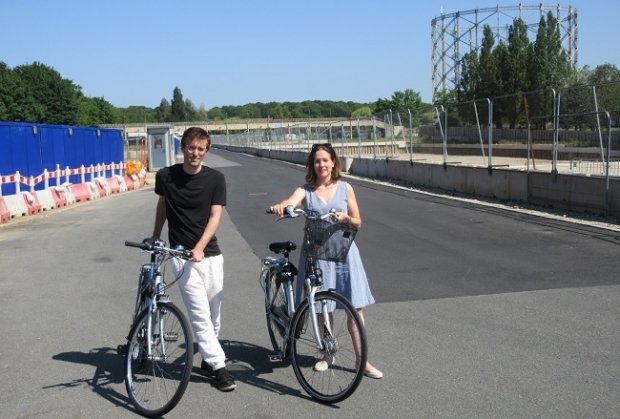 Ashley and Jenni Grossman at site of Victoria Quarter housing development
Barnet Cycling Campaign is joining other groups in urging improvements in highways safety and traffic management if Barnet Council decides to give the go ahead for a massive housing scheme at the former gas works site in New Barnet.

Access to a new estate of high-rise blocks – accommodating at least 1,200 additional residents – would be via an already hazardous road junction where there is scant protection for cyclists and pedestrians.
Objections to the scale and density of the plan by Fairview New Homes and One Housing to build 652 flats in tower blocks of up to ten storeys high have already been raised by the Save New Barnet Campaign and the Barnet Society.

Both organisations criticise the density and over-development of the site arguing that the height of some of the proposed blocks exceeds local planning guidance and that 80 per cent of the new flats will be of 1-2 bedrooms when the need is for 3-4 bed flats, and that less than a third of them are described as affordable.

The deadline for public comments on the planning application for the construction of what will be called the Victoria Quarter has been extended until Wednesday 17 June.
In its objections to the application, Barnet Cycling Campaign, which has 300 members including commuter, leisure, and sports cyclists, lists improvements which need to be made such as traffic calming measures and new cycle lanes and tracks.

“Barnet Council has a woeful record when it comes to making our local roads safe for cyclists,” says Ashley Grossman, who helped prepare the campaign’s case for improvements in cycle safety to be made a condition of planning approval.
“If New Barnet is having to absorb such a large influx of new residents, then this is the moment for Barnet Council to take radical action to provide cycle lanes and cycle tracks and to improve safety for pedestrians.
“We’ve seen a tremendous upsurge in cycling during lockdown and many more residents would like to be able to cycle to work or to the station, or for children to cycle to school, if only it was safe to do so.”

Mr Grossman says the main railway line splits New Barnet into two and immediate action should be taken to provide traffic calming measures at the hazardous road junctions either side of the railway bridge, at the junction of Station Road, Station Approach and Lytton Road and the junction of East Barnet Road and Victoria Road.

There should be improved cycling routes to New Barnet main line station and safe cycling routes to both High Barnet and Cockfosters tube stations.
As a first step street parking should be banned along Station Road (A110) to create space for dedicated bus lanes and cycle lanes to link up with the A1000 at the Everyman cinema, with another segregated cycle way up Barnet Hill to High Barnet tube station.
If roads to the east of the new Victoria Quarter estate (including the Bevan estate) were designated a low traffic neighbourhood, this would enable the provision of a safe cycle route to Cockfosters tube station.

Another key objective of the campaign is for a new level footway and cycle way along the northern boundary of the Victoria Quarter site to link up to an improved tunnel under the main line to provide access to and from Cromer Road Primary School, the Jewish Community Secondary School and other schools in the area.

Mr Grossman and his wife Jenni – together with their three children aged eight, 11 and 14 – are all keen cyclists having been won over to cycling when the family lived in Amsterdam.
“It is so sad for the children,” says Mrs Grossman.
“They used to cycle to school in Amsterdam but it is far too dangerous in New Barnet and they are too scared to ride as much as they did. We would love to get them out more on their bikes.
“If there is going to be a massive housing scheme this is an ideal opportunity to encourage more cycling – and we’ve all enjoyed how pleasant and safe many of the roads have been during lockdown.”

For more information on the objections being made by the Barnet Cycling Campaign and Save New Barnet go to:
https://barnetlcc.org/2020/05/12/victoria-quarter-development-in-new-barnet/
www.newbarnet.org.uk

For full details of the planning application go to:
https://publicaccess.barnet.gov.uk/online-applications/applicationDetails.do?activeTab=documents&keyVal=Q8CYSGJI0I700

Published in Planning
More in this category: « Uncertain future for container yard at High Barnet station Government announces further relaxations of planning controls – and the most radical reforms to the planning system in 75 years. »