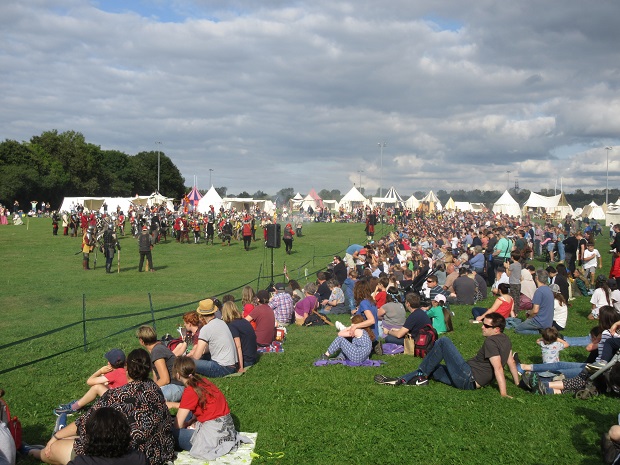 After its cancellation last year, Barnet Medieval Festival returned with a superb display of medieval history and a stylish re-enactment of Wars of the Roses combat which provided a magnificent in-character celebration of the 550th anniversary of the Battle of Barnet.

Although it was a year and a half later than planned, and had to be put together in a rush, from the opening on Saturday morning there was no doubting the strength of support for the weekend festival and the determination to make it success after the loss of so many events due to the Covid.19 pandemic.

Such was the pent-up enthusiasm for a chance to recreate and relive life in and around a medieval battlefield that over 300 re-enactors and medieval traders pitched their tents at the Byng Road playing fields – a record for the festival.

Judging by the delight of the thousands of residents and visitors who toured the campsite and watched the living history displays, the festival committee had every reason to take the credit for having gone ahead with their weekend event so soon after the easing of social distancing restrictions. 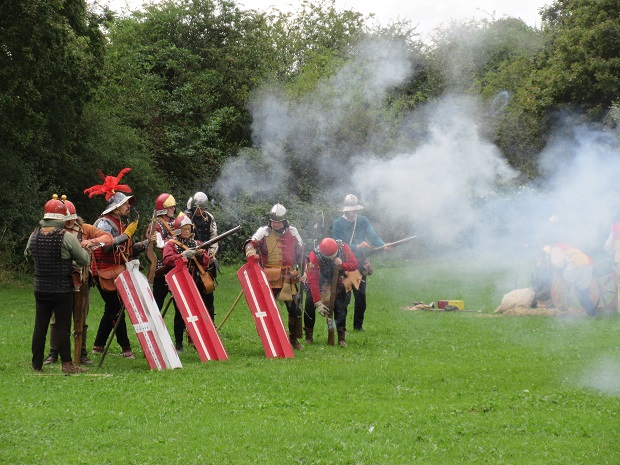 Howard Simmons, chair of the Battlefields Trust, congratulated Barnet for having the foresight and courage to re-arrange the festival for a weekend in September (Saturday and Sunday, September 11-12) and for having staged such a highly impressive re-enactment.

“After the stunning success of its festivals in 2018 and 2019, Barnet was already becoming a must-go event for medieval battlefield re-enactors.

“After this year’s record turnout, there is no doubt the commemoration of the Battle of Barnet is up there with Tewkesbury and Bosworth as one of the top half dozen Wars of the Roses celebrations.” 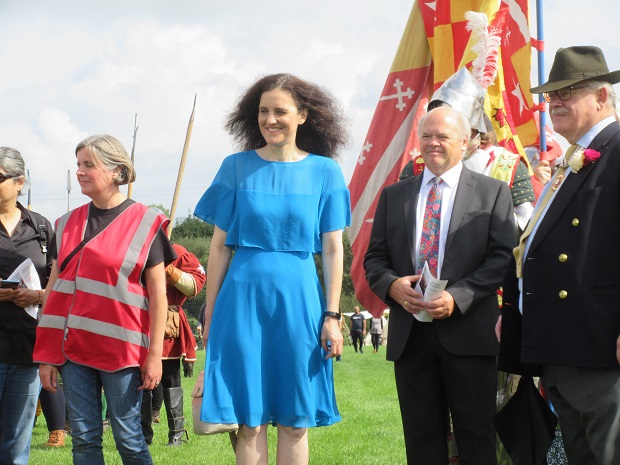 Accompanied by Councillor David Longstaff, the Chipping Barnet MP Theresa Villiers, and the festival director Susan Skedd, he marched with them to the opening ceremony where he fired medieval cannon. 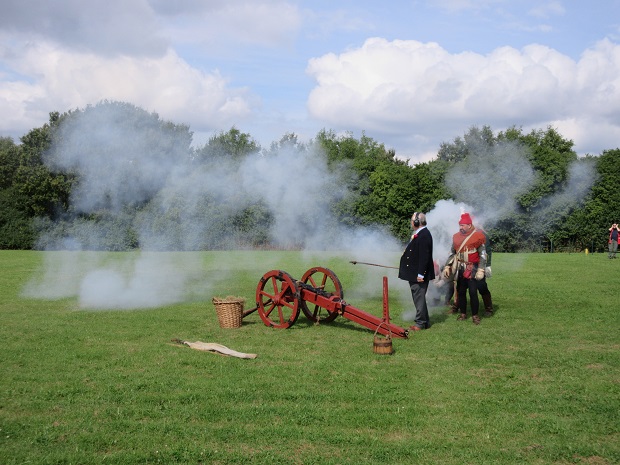 After the loss of last year’s festival because of Covid.19, Mr Russell, patron of the festival, told the re-enactors the local community had been so looking forward to their return.

In introducing Ms Villiers, he reminded the audience that the MP’s forebears were related to both sides of the conflict – and Ms Villiers expressed her delight at being able to join in the commemoration of a battle that had such an important place in Barnet’s history.

The depth of the crowd for the re-enactment of the historic confrontation between the Yorkist and Lancastrian armies on 14 April 1471 was all the more rewarding for the opposing troops because they had missed out on so many battlefield events during the last year and half. 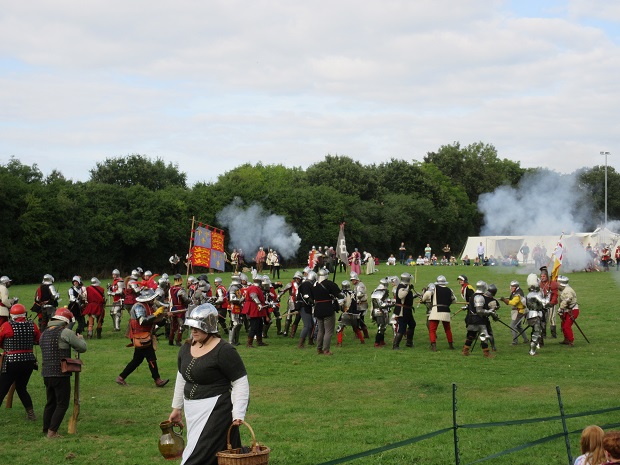 Event co-ordinator Howard Giles said the Byng Road playing fields were ideal for a medieval encampment and as a site for the battlefield because the backdrop of mature trees and the surrounding Green Belt helped recreate the scene as it might have been in 1471.

“Visually the landscape really works and as the opposing armies approach each other the atmosphere is just right and that helps the re-enactors as they engage in combat.”

Walking round the campsite, when talking to the re-enactors in full costume, combat gear and armour, their thrill in being back in character and able once again to bear arms was all too evident. 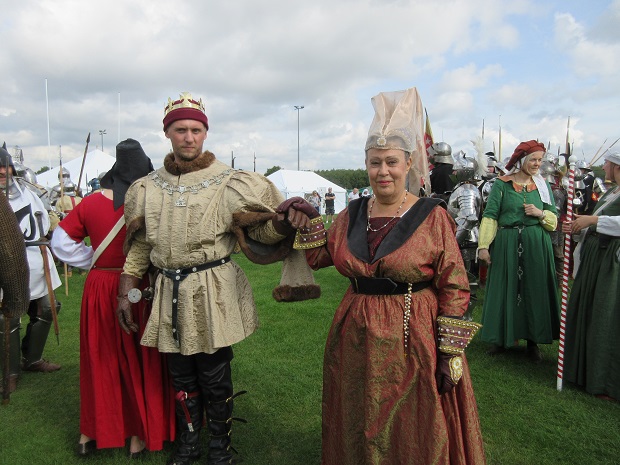 When the Duchess of York (Marion Oakley) sent her eldest son Edward IV (Chris Farncombe) off to battle she couldn’t hide her enthusiasm for the day’s proceedings.

“We really do love it here at the Barnet Medieval Festival. The site and setting are great, and everyone is so friendly and welcoming. Who’s knows Barnet will soon be up there with Tewkesbury as one of the top events of the year.” 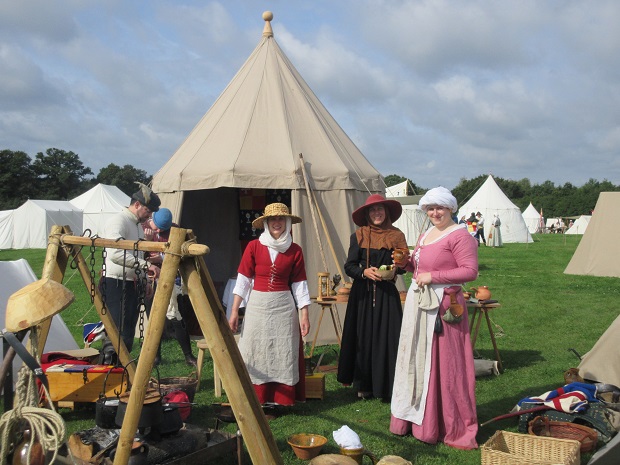 Another group of returning re-enactors were camp followers cooking lunch for their household. Boiled ham, eggs and flatbread were on the menu. (from left to right, Ali Naylor, Catherine Taylor and Aoife Spillane).

Catherine Taylor said their display of medieval cooking over a wood fire was a great draw and they so enjoyed explaining to children what the cooks had to do.

Ms Taylor, who assisted Howard Giles with the commentaries, said part of the thrill of camping at the festival was that the site was so authentic.

“Being so close to a real battlefield does make a difference and when I’m commentating, it really helps me talk through the history of the Battle of Barnet. 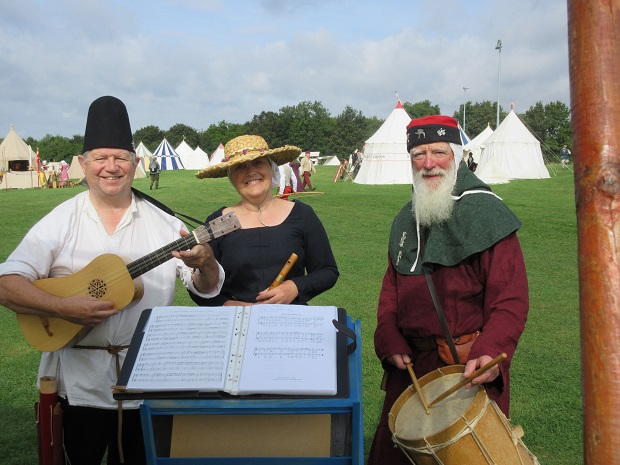 Newcomers to the festival were a medieval music group A Merrie Noyse who entertained the crowds and led medieval dancing.

String player Barry Tudor from Tamworth (left)– who was supported by pipe player Sue Pope and drummer Rod Pomery both from Lostwithiel in Cornwall – was equally impressed by the setting of the battlefield and the smooth running of the campsite.

“We were at the Battle of Evesham festival last month and everyone said you must to Barnet. So here we are,” said Mr Tudor.

“Acoustically this site is so good, surrounded by other countryside. We musicians would have been at a battle like Barnet, and you can imagine the music carrying across the fields.” 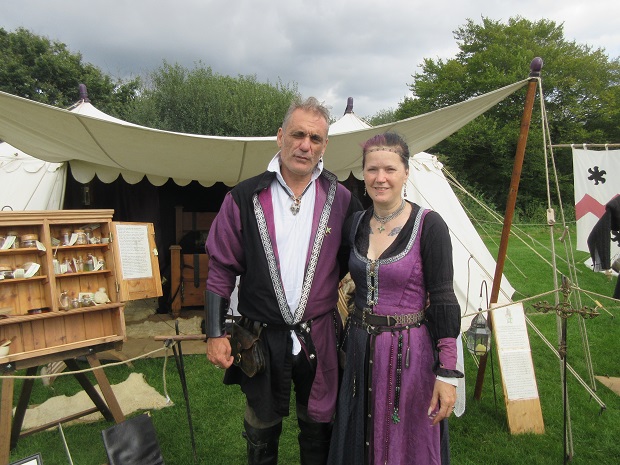 At the height of the Wars of the Roses, the Pope sent an emissary to try to negotiate peace – Lord Alanzo Gabrielli and his wife Lady Alletta Gabrielli who was a trained physic and who brought with her from Italy medieval medicines including herbs such as St John’s Wort and pine water for cleaning wounds.

In real life, Grant and Sam Whyatt live in Sutton, south London, and are proud supporters of the Barnet Festival. 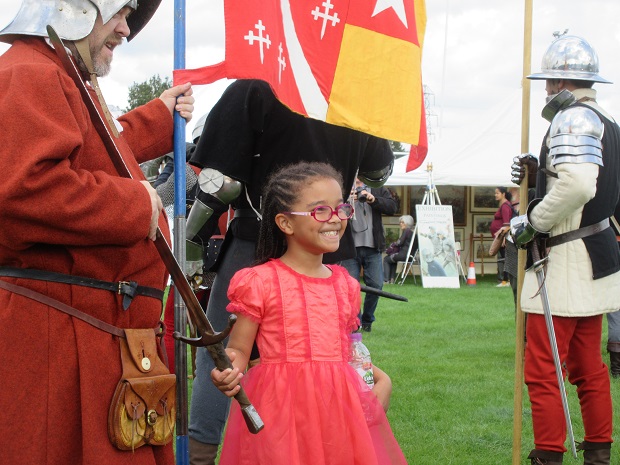 The festival has been proud of its appeal as a family event. Hannah Simon was determined to join in as the opposing armies lined up at the campsite giving a helping hand to a standard bearer for the Oxford household (Johnny Mullen). 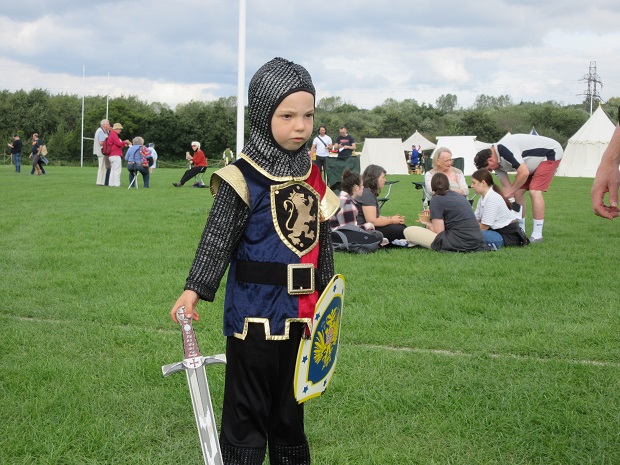 Zec Levitan (six) had arrived for the day dressed and fully armed in case he was called on to help.

Festival director Susan Skedd was delighted there had been such a positive response from the many re-enactors and medieval traders and was especially pleased by the support of their partners the House of Bayard.

After having had to cancel the festival twice in 2020 and again in the summer of 2021, the committee had faced a real challenge in having such a short time to organise the event, but they’d been so encouraged by the response of Barnet people.

Her hope is that next year there can be even more fundraising and if possible, the weekend festival might start on a Friday which would allow the re-enactors time to engage with local school children and widen still further support and interest in the history of the Battle of Barnet.