After the cancellation of so many social events during the last 18 months because of the Covid.19 pandemic, the welcome return of the Barnet Medieval Festival with its battlefield re-enactments kicks off what promises to be a packed programme of weekend attractions for the rest of September.

Despite having to reschedule the festival from summer to autumn, the organisers have lined up an impressive array of attractions at the Byng Road playing fields from 10.30am to 5pm on Saturday and Sunday, 11-12 September.

As this is the 550th anniversary of the Battle of Barnet, the re-enactments so close to what is the only battlefield site within Greater London will have even greater significance.

There will be displays of medieval living history, have a go archery, a medieval market, and a host of other stalls. Admission is £5 for adults; entry is free for children. 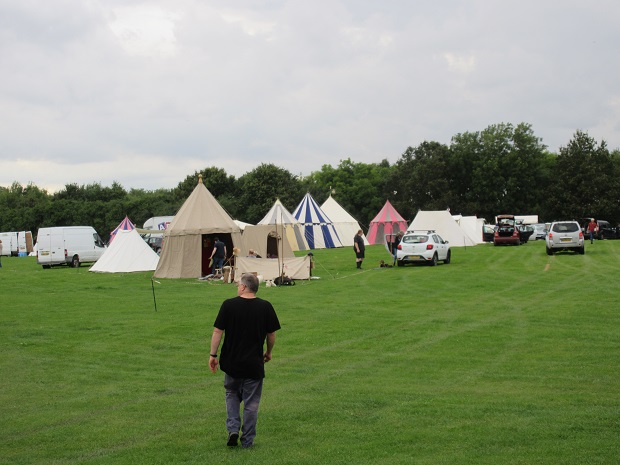 From mid-afternoon on the eve of the festival, early arrivals were pitching their tents. Event co-ordinator, Howard Giles predicted the number of re-enactors and supporters attending would far exceed the turnout in 2018 and 2019 -- an indication of the pent-up demand to participate in a battlefield re-enactment that is finally taking place after being cancelled twice in 2020 and again in summer 2021.

Another event the same weekend with a Battle of Barnet theme is at Monken Hadley Church where there will be activities inside and outside the church from 12noon to 5pm on Saturday and Sunday 11-12 September to raise awareness for fund raising for the restoration of church house.

There will be stalls selling bric-a-bac, vintage china, DVDS, lavender bags, and jams and on sale will be tea, coffee, cakes, and hot dogs.

An art exhibition will offer a chance to “have a go” and there will also be an opportunity to view the church’s 525th anniversary Son et Lumiere which featured re-enacted scenes from the Battle of Barnet. 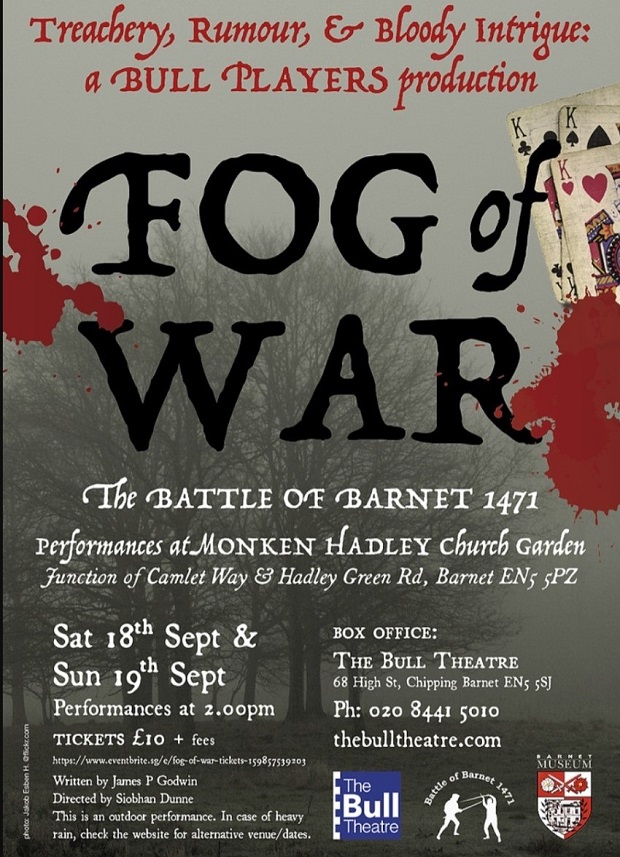 Celebrations marking the 550th anniversary of the Battle of Barnet continue the following weekend – Saturday and Sunday 18-19 September – when the historic garden at the rear of Monken Hadley Church will become the setting for two open-air performances of the Bull Players new production, Fog of War.

Siobhan Dunne, the Players’ director and producer, opted for an open-air premiere for the play, written by her son James P Godwin, because she thought it would provide the safest acting environment for the cast and be welcomed by the audience.

There are two afternoon performances, each starting at 2pm, and the play aims to highlight the treachery, rumour and bloody intrigue surrounding the Battle of Barnet and presents this through the daily toil of women working in a medieval kitchen as the local inhabitants ready themselves for what became one of the decisive confrontations of the Wars of the Roses. 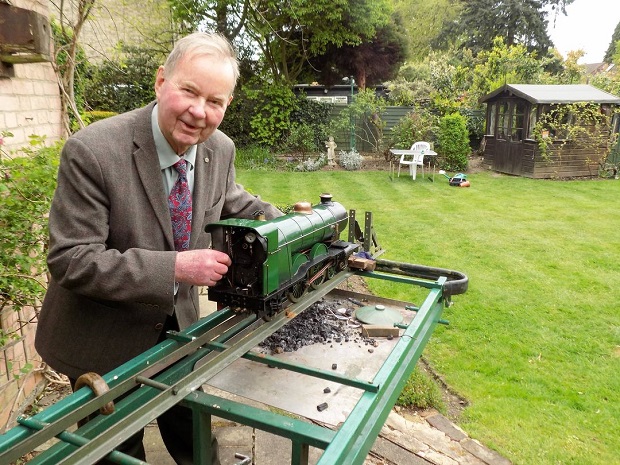 Well-known former Barnet GP Dr Ian Johnston will be displaying his miniature railway when he opens up his garden at 130 Wood Street, Barnet, on the afternoon of Sunday 19 September (from 11am to 5pm) for a garden show and fete.

There will activities for children, cake and plant stalls and a chance to relax in his delightful garden.

Dr Johnston, who was GP at the Old Court House surgery and who served as a locum in Barnet and Finchley, is raising funds for the Jubilee Sailing Trust which enables disabled people to sail on tall ships. 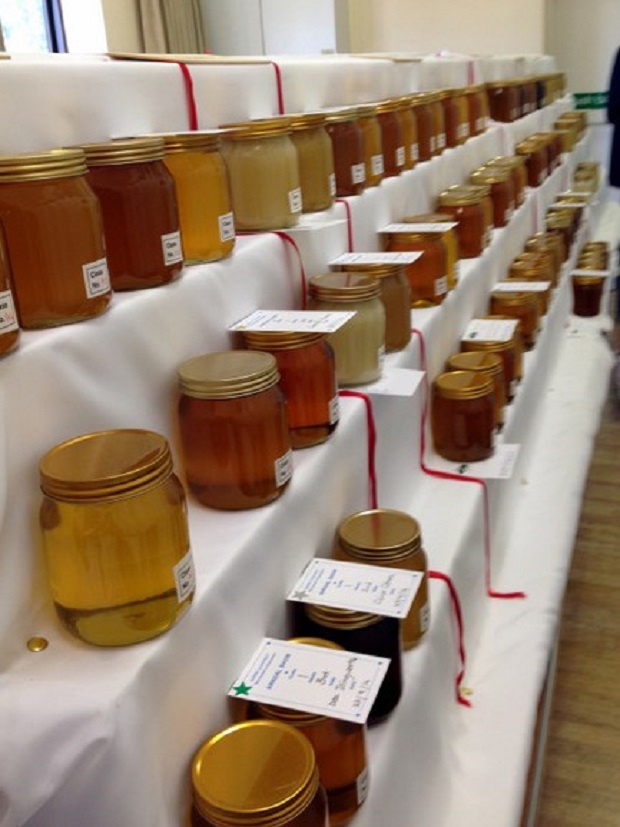 Another welcome return is the annual show of the Barnet and District Beekeepers Association at the Hadley Memorial Hall at Hadley Highstone on Saturday 25 September from 12noon to 2pm.

On display will be all the entries in the various categories – honey, wax, cakes, etc. Local honey will be available to buy at £8 for a 12oz jar and £15 for two. 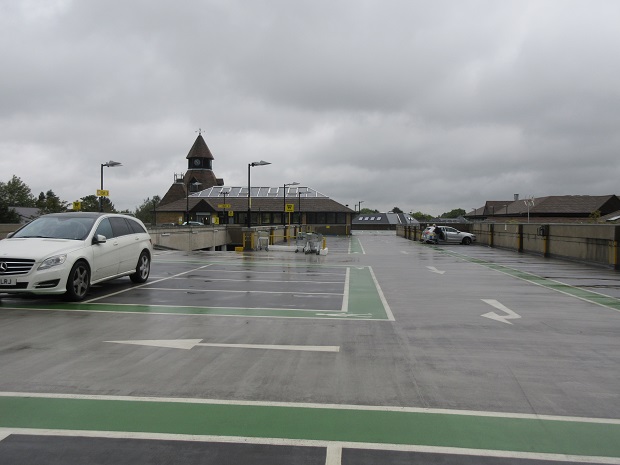 Weather permitting the top deck of the NCP car park at The Spires shopping centre will be filled with classic and vintage cars on Sunday 26 September for the annual show of the Barnet Classic Car Club (11.30am to 2pm)

After missing out last year, members are raring to go – ready to parade up Barnet Hill and along the High Street. Fifty cars have already been entered and as many as 70 are expected to take part.

Vehicles will assemble in the Underhill playing fields car park and then parade along the High Street at thirty-second intervals from 11am.

At the last show – in 2019 – rather than heading for the top deck, bad weather forced those taking part to take refuge in the large basement of the car park and although a little cramped, it was soon a case of bonnets up, engines ready for inspection but organisers Chris and Diane Nightingale are hoping for better weather in 2021.