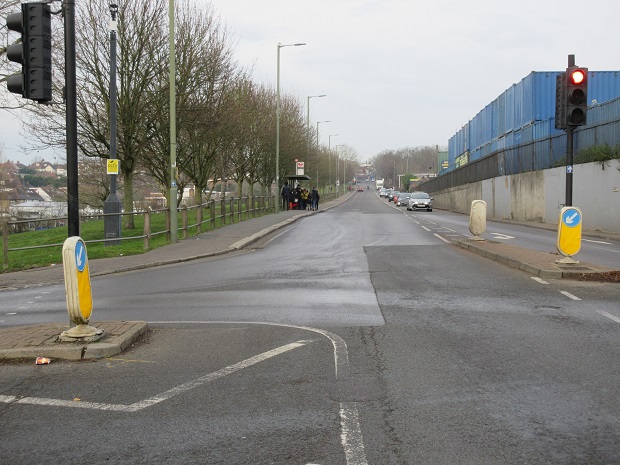 Cyclists heading out of London have always enjoyed the challenge of riding up Barnet Hill -- and a survey carried out exactly 100 years ago showed there was even greater enthusiasm for tackling the climb back in the 1920s.

Cycling for leisure was at the height of its popularity in the early years of the last century.

On August Bank Holiday Monday 1922 a total of 3,331 cycles were counted traversing the hill – twice as many as on a weekday – and in far greater numbers than anything seen today, except perhaps early on summer Sunday mornings.

Barnet has one of the lowest cycling rates in London: only two per cent of daily trips are cycled, significantly lower than in neighbouring boroughs, and by contrast car ownership is the second highest.

Perhaps not surprisingly, when Barnet Council is yet again in the dock because of decades of hostility towards cycling, the possibility of cycle lanes being installed on Barnet Hill seems as remote as ever. 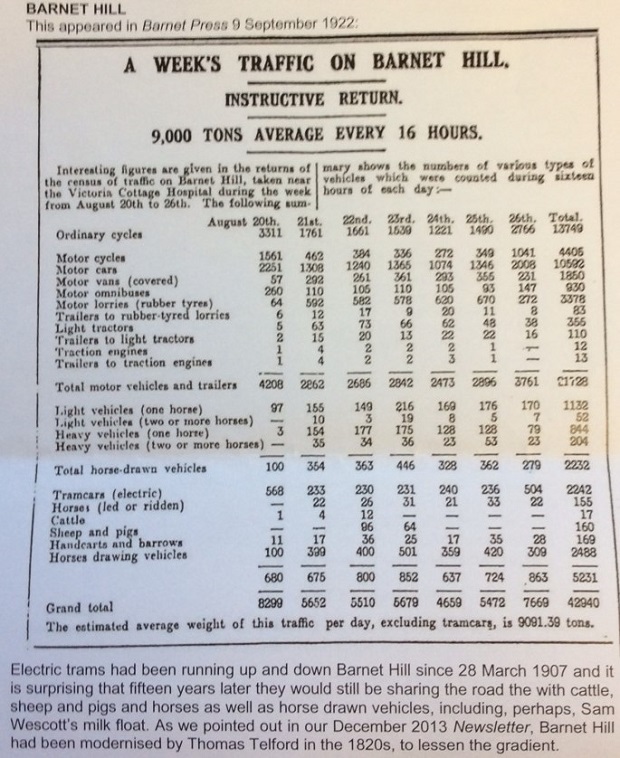 The traffic survey that was held on Barnet Hill in 1922 lasted for a week – and it provides a fascinating insight into the vast array of vehicles and contraptions that were passing up and down.

This snapshot of the popularity of cycling in the 1920s is a timely reminder when Barnet councillors are back in the firing line for failing to safeguard the future of the emergency cycle lanes that were installed a year ago between North Finchley and East Finchley.

Barnet Cycling Campaign has been complaining for years about the borough’s “abject failure” to encourage cycling and protect cyclists.

Enthusiasts are being urged to ensure they register their support for the “pop-up social distancing” cycling lanes between Tally Ho corner in North Finchley and the Haringey boundary at Bishops Avenue at East Finchley.

The 3.2 km twin lanes were opened in November 2020 as part of a £2 billion government initiative to encourage cycling and walking to fight the coronavirus pandemic.

An 18-month experimental period for the lanes ends in March/April 2022 when the council will decide, after reviewing feedback, whether to make the cycle and bus lane scheme a permanent feature.

The current state of the experimental lanes does not hold out much promise: many of the vertical, flexible wands which designate the boundary between cyclists and vehicles have disappeared, having been knocked over by cars or delivery vehicles.

Better Streets for Barnet campaign summed up the frustration of cyclists: “Day by day, wand by wand, the A1000 cycle lane is disappearing before its future has even been decided. So disappointing to see how little Barnet Council care.”

At the height of the 2020 lockdown there were hopes cycling lanes might be installed along the entire length of the A1000 – on from Tally Ho corner, through Whetstone, then up to High Barnet and on to Monken Hadley but funding for this extension was unexpectedly rejected by TfL and the Department of Transport.

Barnet councillors are blamed for the failure to secure the extra money which would have ensured that cycle lanes could have continued at least to the top of Barnet Hill.

Campaigners said the council’s “pathetic” response was only to be expected when the then council leader liked to joke that High Barnet residents could hardly be expected to cycle home from the City of London when they would be faced by having to cycle up Barnet Hill.

But hundreds of local cyclists hit back, insisting they are cycling up and down all the time, and say there are many more at weekends.

Indeed, from early Sunday morning, a steady stream of cyclists can usually be seen powering up the hill, many of them on racing bikes, frequently riding in groups, determined to maintain the fastest possible speed.

A summer Sunday morning cycle ride heading out of London still has great appeal because there tend to be far fewer cars and far less commercial traffic.

With every mile further north the air gets clearer, there are more trees and many more open spaces.

On reaching the top of the hill at Barnet parish church some cyclists head west along Wood Street, others fork left further up the High Street at the St Albans Road junction, and the remainder head on north, up the A1000, towards Potters Bar, all keen to enjoy the quieter roads and countryside of the Green Belt. 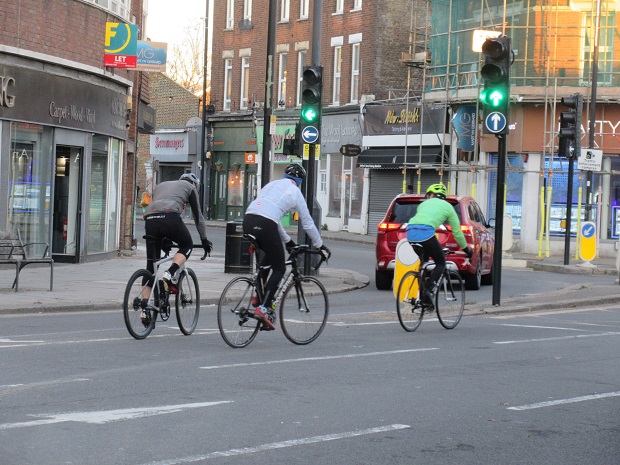 Some Sunday morning groups stop off for a coffee but the time when most pass through the town centre – often as early 7, 8 or 9am – High Street cafes are only just coming to life and the cyclists probably have more enticing rendezvous to head for further along their rides.

Barnet historian and keen cyclist Dennis Bird forwarded the 1922 traffic survey to the Barnet Society having seen it first in the newsletter of the Friern Barnet Local History Society.

“What the survey illustrates so clearly is that in the 1920s Barnet was a fresh air destination from stinky London and this was a really popular route out of London, especially during a Bank holiday weekend.”

The traffic survey was carried out almost at the top of the hill, near for the former Victoria Cottage Hospital, and the Bank holiday Monday count of 3,311 cycles was almost equalled the following Sunday when 2,766 were observed – double the weekday average of 1,500.

Cycling for leisure began to decline after the 1920s due to the growing popularity of the car but cycling to work was commonplace in the UK until the 1950s.

Barnet Council’s Long Term Transport Strategy for 2020 to 2041 estimates there at 345,000 daily trips by car across the borough that could be cycled.

Key barriers to increased cycling are fast flowing traffic, fears over safety and a lack of infrastructure such as cycle lanes and safe storage.

Providing cycle lanes along the A1000 is top of TfL’s list for increasing cycling within the borough and another suggestion in the strategy document is to create a Barnet cycle loop along the entire length of the Dollis Valley green walk…but cyclists fear little change in Barnet Council’s tardy response.