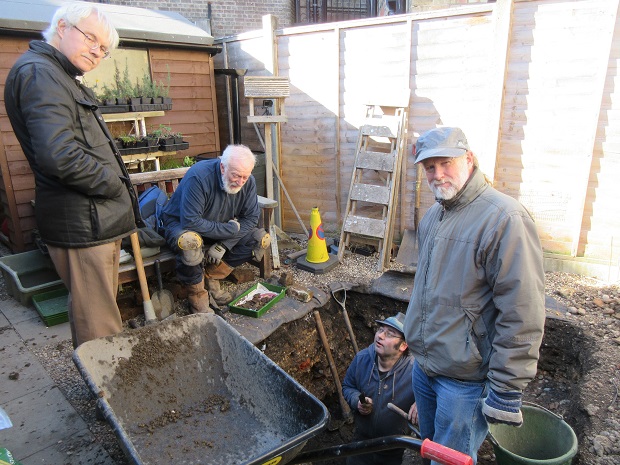 Pieces of medieval pottery and broken roof tiles have been discovered during a three-day archaeological dig at the rear of traditional sweet shop Hopscotch at 88 Barnet High Street.

Significant finds that dated from later centuries included clay pipes from the 1600s and various bottles from the Victorian era.

All the pieces of pottery and tile, together with other items which were recovered from a 1.5-metre-deep pit, will be washed, cleaned, and dated by members of the Hendon and District Archaeological Society.

Bill Bass (above, far right), the society’s field officer, who led the excavation, said the medieval items recovered were comparable to other finds from digs at the rear of the Mitre Inn and other sites along Barnet High Street.

“It has been very encouraging to find so many pieces of medieval pottery and tile and it is further confirmation of our findings from previous excavations about the historical importance of this section of the High Street.”

Members took it in turn to dig down and by the third day the team had reached a depth of 1.5 metres – see above, from left to right, Andy Simpson, Roger Chapman, Melvyn Dresner, and Bill Bass. 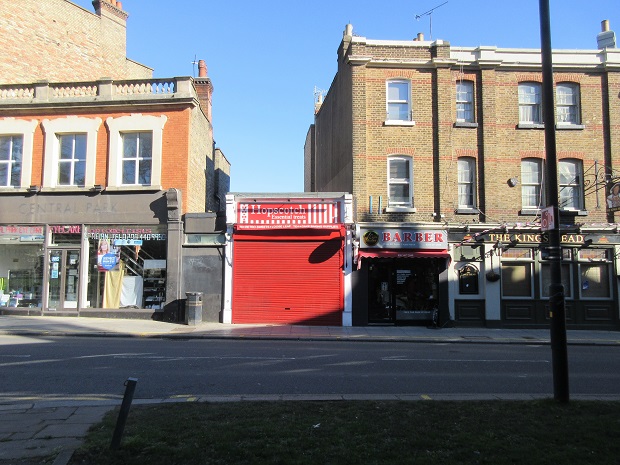 Hopscotch and its rear garden are a designated area of archaeological significance and the previous medieval buildings on the site formed part of the narrow street of shops and inns beside Barnet Parish church which was known as The Squeeze. 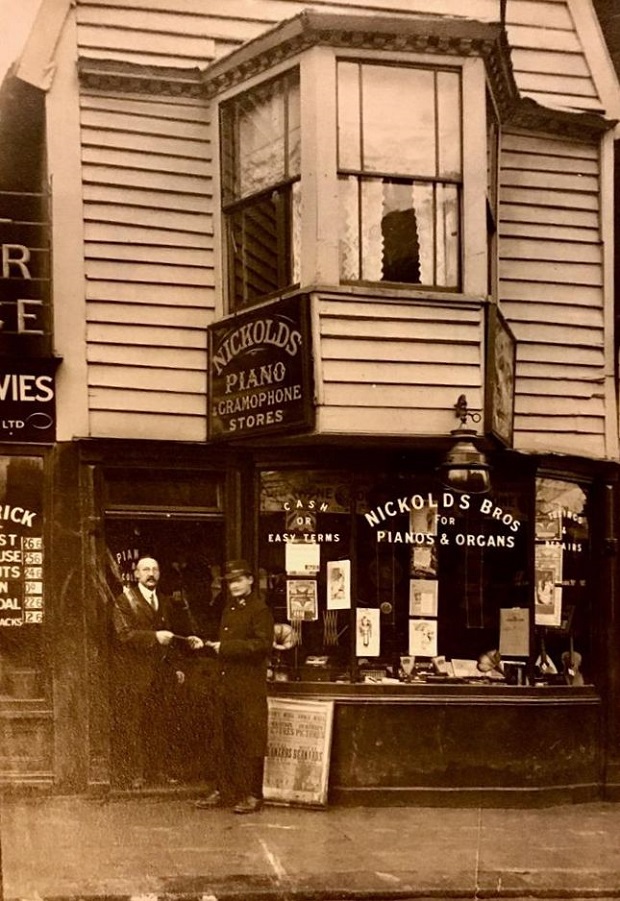 Until its demolition in 1933 – and the construction of the present single-storey shop – 88 High Street was a Dutch-style timber building with a gabled facade and distinctive Oriel windows, which was occupied by Nickolds Bros. selling musical instruments and sheet music.

Hopscotch’s proprietors, Alice and Michael Kentish, were delighted to offer the archaeological society the chance to carry out a dig at the rear of their premises.

The shop’s history has been researched by Michael, who has produced an illustrated leaflet, describing its place within the High Street and listing the previous owners as far back as 1889.

“We have always thought we would like to find out what might be buried in our small rear garden and whether there might be something of historic interest.”

Alice said she hoped to create a sensory garden at the rear of the shop and before any work was carried out, they thought this was the ideal opportunity for the archaeologists to have a look. 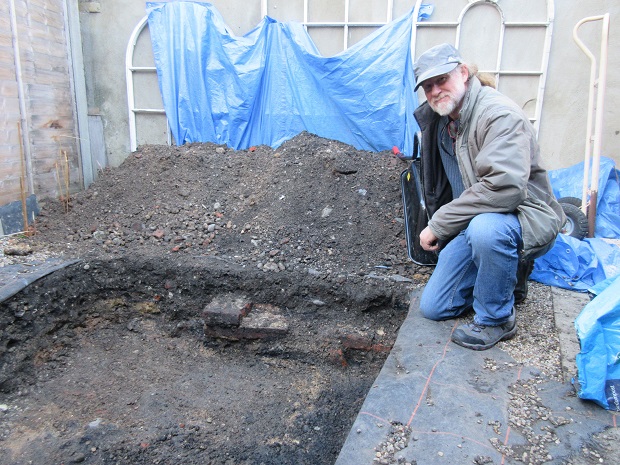 During the first day of the dig Bill and his team recovered an array of glass bottles from the 1880s and numerous bricks from the Tudor era, which were probably recycled from buildings demolished around the Tudor Hall in Wood Street.

After two days’ digging – and reaching a depth of 1.1 metre – the team had recovered several stems from clay pipes, and fragments of kitchen pots and other pottery. Some of the pottery shards were glazed, indicating they were post medieval. 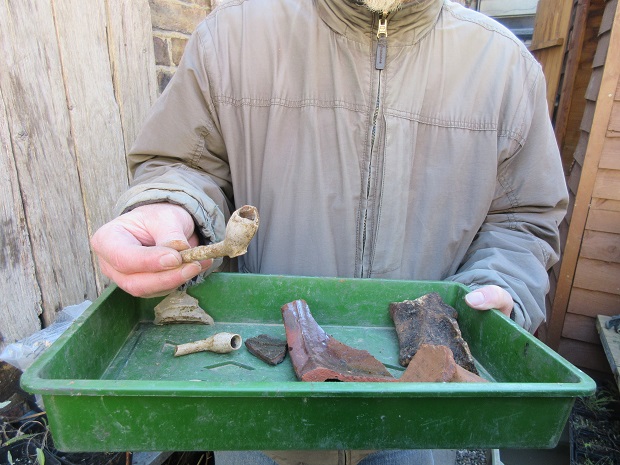 Bill said the clay pipes were from the 1600s. “What is so noticeable is that the earlier the pipe, the smaller the bowl, because tobacco was so pricey at the time. One of the pipes is still blackened from smoking.”

At one stage the dig went through garden soil from the 1600s suggesting that the area had been used to grow vegetables. “The tell-tale indicators are that the soil was clearly cultivated, and we found bones and bits of oyster shell which probably came from garden compost,” said Melvyn. 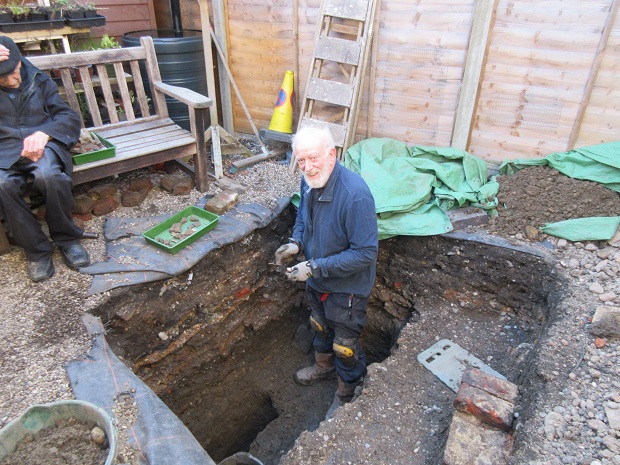 Finally at around 1.5 metres, Roger and the team discovered fragments of medieval pottery and tile dating from as early as around 1150. 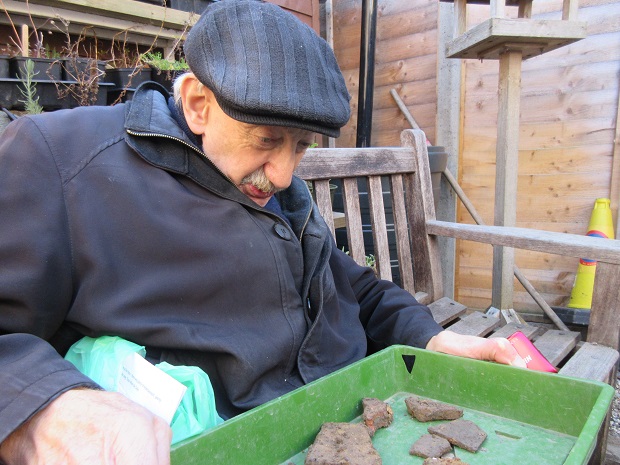 A tray of medieval finds was handed round the team for inspection at the end of the dig and was of particular interest to long standing member Eric Morgan.

“I like to come along and support the team and see what they’ve found. At 79 I am a little too old to get into the pit but its great to see how they get on and whether they turn up anything of interest.”