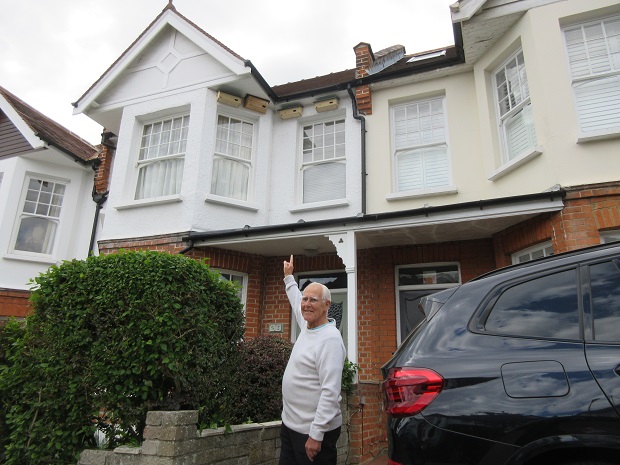 Swifts which migrate to High Barnet for the summer months have lost one of their greatest admirers and staunchest guardians: Tim Friend who encouraged fellow householders to follow his example by installing swift nesting boxes has died at the age of 71.

His death coincided with the annual count by Barnet swift enthusiasts who monitor their arrival and departure and who try to identify and protect their nesting sites.

Last year Mr Friend (see above) added three more nesting boxes under the eaves of his house in Fitzjohn Avenue in the hope of encouraging more visitors to join the pair of swifts which he attracted to his first nesting box.

Friends and neighbours in the swift group have paid tribute to Tim’s inspiration in encouraging other nearby residents to install nest boxes.

Ornithologist David Martens who led the formation of the group two years ago is encouraging Tim’s admirers to make a donation to the largest swift conservation charity -- www.swift-conservation.org -- and to personalise the donation by ticking the box to say it was in Tim’s memory. (Full details below)

“Let’s help to keep our swifts in the skies and celebrate what Tim has done to safeguard and encourage High Barnet’s swifts,” said Mr Martens.

Tim’s wife Jane told the Barnet Society her husband passed away at the Royal Free Hospital early Sunday morning – on the Sunday the Barnet enthusiasts held their annual get together.

She said that there are definitely swifts nesting in one of Tim’s four boxes and there may be others that are occupied as well. “Tim always kept a keen eye on the boxes – I am rather new to observing swifts’ movements.”

Tim was a self-employed graphic designer all his working life and a meticulous wood carver. “Tim’s woodturning was known throughout this area and beyond with his turnings in many local homes, several European countries and also as far afield as America, Israel, Thailand, Australia and New Zealand.” 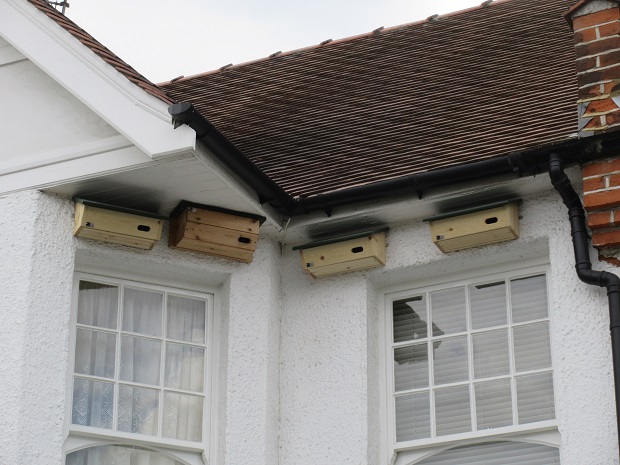 Tim installed his first nest box in the summer of 2018 and a pair of swifts used it in 2019 to raise two chicks and again last year.

To help attract their attention he put a speaker on an upstairs window ledge and played recordings of the swifts’ call – the squealing sound that gives them their nickname “squealers” – which can be downloaded from YouTube.

Encouraged by his success, he purchased another three nest boxes from the R.S.P.B.

Spurred on last year by Tim’s enthusiasm, Pete Lyons of Manor Road installed under the eaves of his house a nest box which had made himself.

The view among the group is that High Barnet’s swift numbers are relatively stable – 25 to 30 swifts were seen swooping over Manor Road in early July and 20 plus above Sherrards Way.

Sightings of swifts are a regular feature at many of High Barnet’s green spaces, including Dollis Valley, Whitings Hill, Whalebones, Byng Road playing fields and allotments and Shire golf course.

They usually depart again for Africa by early August – and by then local enthusiasts hope to be able to assess whether it has been a productive year for the aerial visitors who spend three summer months swooping, swirling, and squealing high in the skies over High Barnet.

Here is the link for donations in Tim’s memory

you can click on "donate" (bottom left)...and mark the donation in memory of Tim