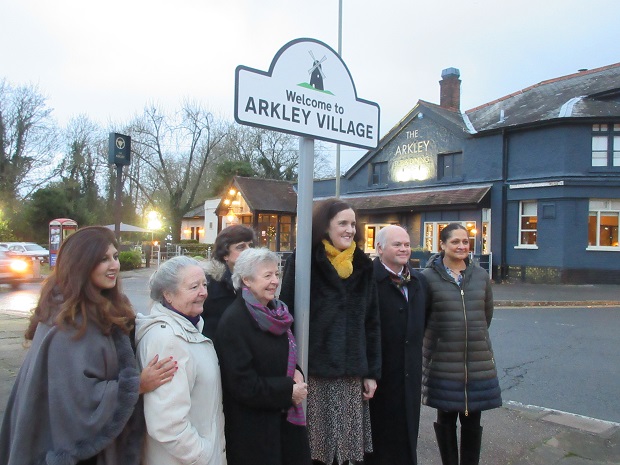 "We are back on the map at last" was the cry that went up at the unveiling of three roadside signs declaring "Welcome to Arkley Village".

Motorists and pedestrians leaving or approaching High Barnet along the Barnet Road are now reminded they are entering what the locals say is their “quaint and highly esteemed” village on the northern extremity of this London borough.

Previous signs which said welcome to “Arkley, Hertfordshire” were removed after the introduction of the EN5 postal district. To the dismay of Arkley residents they were never replaced. 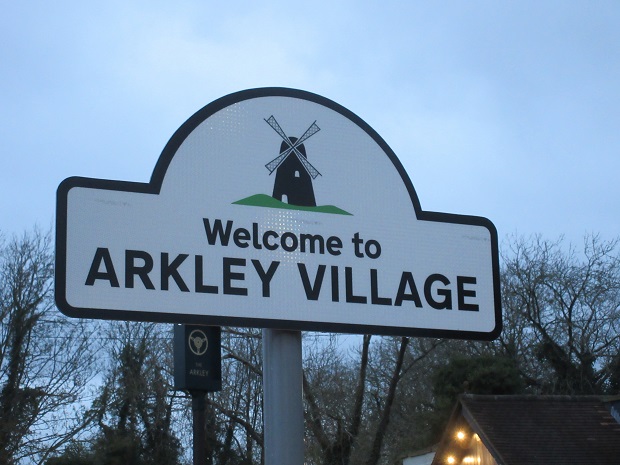 “We’ve been campaigning since 2014 to get the return of some Arkley village signs and finally we’ve got the recognition we have been waiting for,” said Anji Iqbal, a leading member of the Arkley village committee, who helped organise the unveiling.

“We have managed to keep a village atmosphere here in Arkley,” said resident Karin Read. “We are the last village where Barnet meets Hertfordshire, and we are proud that we are different from the rest of the borough.”

The last of three unveiling ceremonies -- which was held outside the Arkley public house at the junction of Barnet Road and Wood Street -- was performed by the Chipping Barnet MP Theresa Villiers. 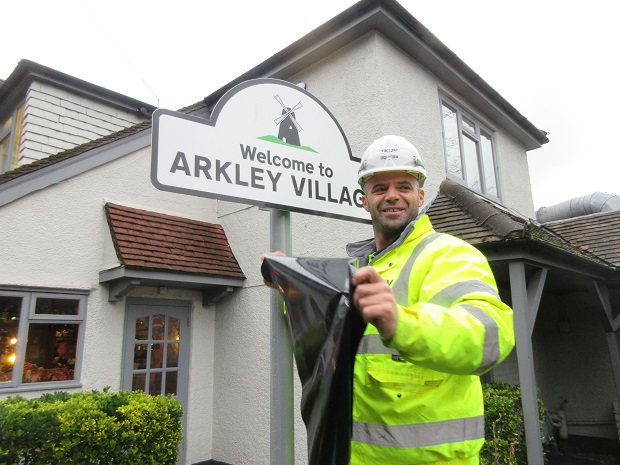 The first of sign was unveiled outside the Gate public house by one of the pub’s proprietors Lorrie Byrne after the finishing touches were added – see above – by Ndricim Pashai of Barnet Council contractors TKJV.

This sign is on the opposite side of the road to the house and garden which includes the historic Arkley windmill, a four-storey former corn mill which was built in 1830 and was a well-known landmark until being screened by trees. 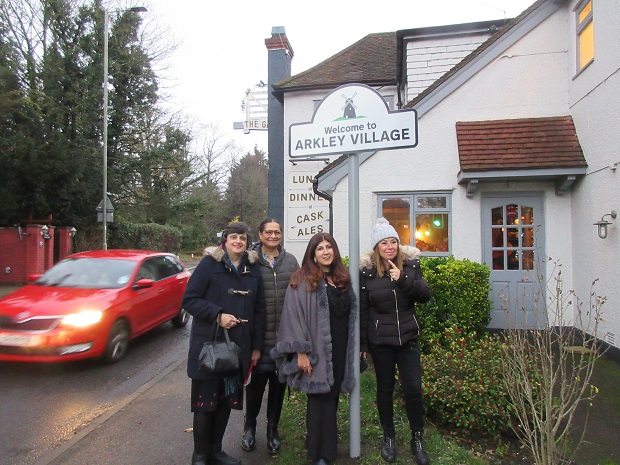 Given its importance within the village, the committee were determined that the windmill should be incorporated within the design of the sign, which was the work of design company MJ Associates and local resident Mel Garfield.

“It was our contribution to help with the design. We wanted to ensure that the windmill was a true representation with four sails and two mill windows, standing on a greensward. Everyone liked it…and it does to Arkley proud,” said Ms Garfield, seen here far right, with Karin Read, Sushma Shah and Anji Iqbal. 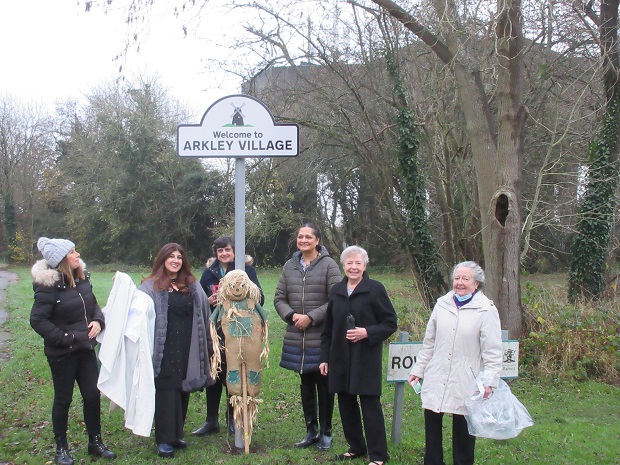 The second sign to be unveiled is at the junction in Rowley Lane and the centre piece at its unveiling was the Arkley scarecrow -- another symbol of the village.

In previous years there had been an annual village fete at the windmill, and this was revived in 2013 with a scarecrow fete. After a couple of years of fund raising the village committee had raised £3,000 and started its campaign for new village signs.

Finally, their efforts bore fruit and ward Councillor David Longstaff took up their request with the borough council.

“Much to my surprise the environment committee agreed to the request and set aside £2,000 for the cost of preparing three signs and installing them,” said Councillor Longstaff.

“Local councils do have a responsibility to enhance the fabric of the borough and little things like these village signs are greatly appreciated by the residents.

“People do identify with their locality and if there is a sense of community there is every likelihood it will be cared for.”

Theresa Villiers, who has been an Arkley resident since 2004, shortly before becoming the Chipping Barnet MP in 2005, added her congratulations to the success of the welcome sign campaign.

“Arkley is a place that deserves recognition, and the village signs put it on the map and will help it become more visible.”