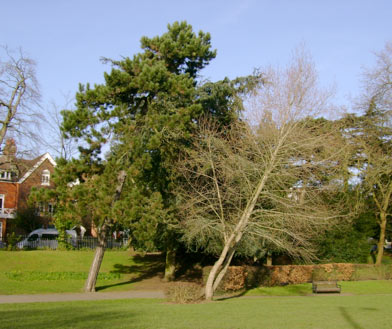 The tree is, in fact, a European Black Pine, sub species Austrian Pine, a native of Central Europe.

The Aspen Populus tremula is sometimes called the Quaking Aspen and is native to Britain.

The apparent rejection by the British tree of the advances from its European neighbour is a long-established one and probably of no contemporary relevance.

A good example of a Scots Pine Pinus sylvestris is to be found on Hadley Common near to the pond and the junction of Hadley Common Road and Camlet Way. 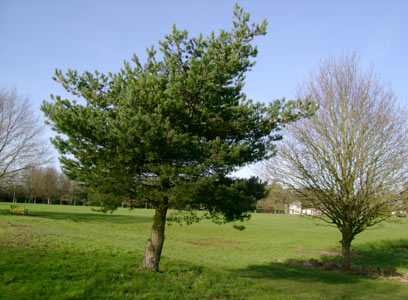 This is referred to in Tour Point 2 of the ‘Hadley Green, Common and Woods’ App.

It has shorter and softer needles than the European Pine and a pronounced reddish-orange colouring in the upper trunk.

As with most footpaths at the present (February 2016) time, wellies are usually better than walking boots for keeping the feet dry.

The area in Hadley Woods by the footbridge shown in Tour Point 4 in the Hadley App and referred to in ‘Rambles’ Vol. 2 Walk 7 para.3 has a lot of standing water that is currently very difficult to avoid.

Ridge Village and the footpaths towards Mimms Lane
The grave of Captain John Trotter, shown in Fig 1 of Walk 5 (iii) in Vol. 2 and Tour Point 3 of the Ridge App, is presently overgrown with ivy but still easily distinguished by the surrounding iron railings.

Inevitably at this time of the year, many sections of the footpaths between Ridge and Mimms Lane will also be best traversed in wellies.

The footpath from the corner of Bigpursley Wood to Catherine Bourne shown in Fig.3 of the same walk and referred to in Tour Points 10 and 11 in the Ridge App is its familiar muddy, sticky self.

It can be by-passed by taking the recently opened bridleway 39 from the wood directly to Mimms Lane.

Darlands Lake Nature Reserve
The approach to the Reserve from Totteridge Green and shown in Fig. 2 of Walk 6 in Vol.2 taken in November 2012 is now at least as muddy as in the photo taken in March 2015 at Tour Point 2 in the Darlands Lake App.

The footpaths in the Reserve area itself are a little more easily negotiated with a walking pole in hand as well as wellies on the feet.

Please let me know of any errors in the booklets or the App and also any advice on how they could be improved, with an email to: This email address is being protected from spambots. You need JavaScript enabled to view it.

More in this category: « Updates for ‘Rambles Round Barnet' 31st May 2016 Lime Grove Footpath and the Darlands Nature Reserve »