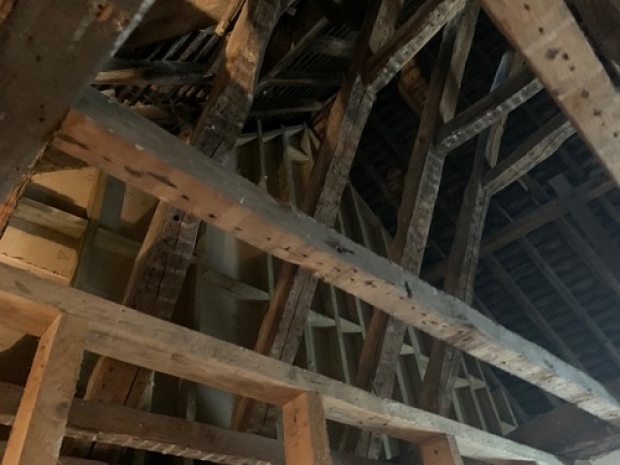 A medieval timber roof discovered above a vacant shop in Barnet High Street might be as old or even older than the famous hammer-beam roof at Westminster Hall, the oldest building at the Houses of Parliament.

Further research into the age of a crown post timber roof found intact at 54A High Street dates it to 1397, or perhaps earlier, which would make it the oldest known surviving timber structure in Greater London.
Richard II commissioned the construction of Westminster Hall’s timber roof in 1393 and it was completed in 1401.
Experts in historic buildings believe that Barnet’s former medieval shop – two doors down the High Street from the Mitre Inn – was also built in the 14th century when Abbot Moot was re-organising buildings in the St Albans Abbey estate.

Sherry Bates, of chartered architects Bates Zambelli, who is advising on the conversion of the former hairdressing salon to a florist’s shop, is awaiting the results of tree-ring dating to confirm the precise age of the timbers.
But he says further research all points to 1397 or earlier. This is the date suggested by Lee Prosser, curator at historic royal palaces, who has studied medieval buildings in Hertfordshire.
“Lee has tied the timber structure to the roof structures of medieval barns on the St Albans Abbey estate and he is convinced it was completed no later than 1397 or before.” 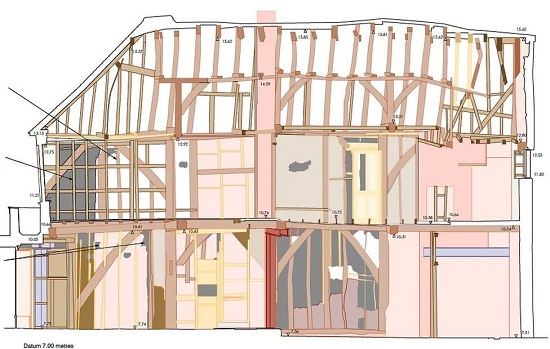 Mr Bates has created a drawing showing the various ages of the building.

The thinking is that this medieval shop was built in the days when High Barnet was on the route of animal drovers who stopped the night at taverns, or perhaps sold animals at fairs in Barnet.
At some point it is thought the building was amalgamated into a group of taverns that became the Mitre, which was established in 1633 and is Barnet’s oldest former coaching in.

Several features of the roof structure support the date of 1397 or earlier, including a splayed and tabled scarfe joint, which has a kink similar to other wooden joints found in Hertfordshire barns built in the 14th century, and the evidence of slots for boards in front of the shop for use when it was closed.
Samples of paint on timbers and walls also date from the medieval period.

Mr Bates says Historic England agrees that the roof is the oldest known surviving structure in Greater London and their inspector, Michael Dunn, thinks it might even date from 1295.
“We should get a precise date once the dendrochronology tests come back. Using data on tree rings, it is possible to be accurate when dating timbers.”

Owner of the property Arianit Dobra is working with conservationists in seeking planning permission to convert the building into a florist’s shop with a one-bedroom flat above.
He hopes to leave the medieval roof space preserved and partly exposed. “I have to be the curator of the building so that it can be a gift to the next generation.”

Latest update (18.12.2020): BBC London has been told by Historic England that analysis has shown that the oldest timbers were from trees felled between 1330 and 1362.

Dr Martin Bridge of the Institute of Archaeology at University College London, which was commissioned by Historic England to analyse the samples, said he had "no clue" about the age of the building judging by the outside of it. It was quite a remarkable find in north London.

Published in General News
More in this category: « Brightening up lockdown: busy trading at Barnet market Is New Barnet's gasometer about to disappear from landscape? »