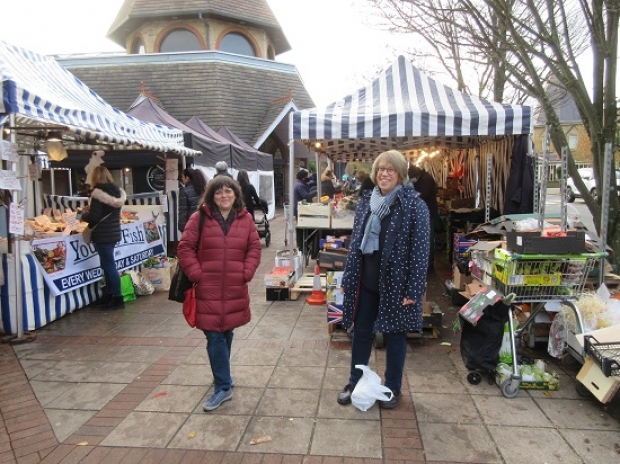 Jenny Linford (left) and Judith Clouston
Friends of Barnet Market are welcoming the continued presence of the twice-weekly market during the second lockdown -- and are especially pleased with the success of a new fresh fish stall from Ipswich.

Much to the dismay of local shoppers the market had to cease trading during the 13 weeks of the first lockdown earlier this year.
There were fears another extended closure might put off stallholders and erode the viability of the market which has succeeded, after years of disruption, in re-establishing itself at the bandstand entrance to the Spires shopping centre.
With most of the Spires’ retail outlets having had to close for a second time, the market is helping to brighten up the shopping centre on Wednesdays and Saturdays.

After five weeks trading at Barnet market, Young’s Fish, which has stalls at Ipswich, Colchester and Chelmsford markets, says Barnet’s shoppers are some of their most discerning customers.
“What we so like about Barnet market is that our customers are really interested in the fish we sell.
“They want to know where it is sourced, what is in season, and what other fish and shellfish can be ordered.
“That interest from our customers gives us a real pride in our job,” says James Young (18), son of the Michael Young, who started the business in 1981. 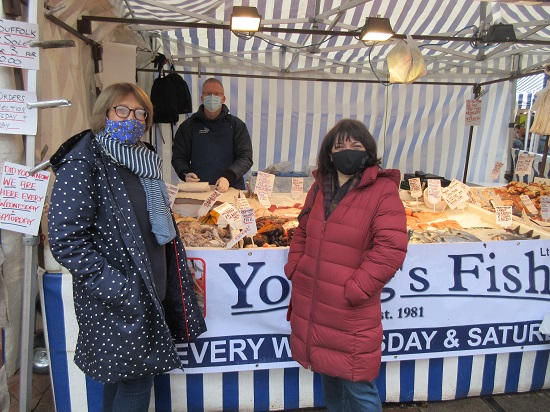 Two long-standing committee members of Friends of Barnet Market – Judith Clouston, vice-president of the Barnet Society, and local food writer and author, Jenny Linford – are delighted to hear of the success of Young’s Fish.
“We lost our last fish stall – run by Adrian Wright of Lowestoft – during the long lockdown because Adrian had to find another pitch.
“Although Barnet market was closed from March onwards, other markets remained open, and that is why we are so delighted Barnet is trading during the current shop closures,” said Ms Clouston.

Ms Linford, who has recently written extensively about the success of markets around the country on her website – https://jennylinford.co.uk/markets-matter/ urged local residents to support Barnet’s Wednesday and Saturday markets.
Last year was the 60th anniversary of what was originally Barnet’s cattle market expanding into fruit and vegetables and household goods.
Albert and Joan Bone opened the first fruit and vegetable pitch in 1959 – and the business has been carried on for three generations and is now in the hands of their grandson Tyler Bone.

“With a history like that, Barnet should be proud of its market, and understand that the business of running market stalls is a pretty fragile business and needs to be nurtured and cherished,” said Ms Linford.
“Markets are such a friendly place, the prices are always pretty reasonable, if not cheap, and it’s a tribute to Barnet that we still have a twice weekly market after it was mucked about for so many years without a permanent site.”
Ms Linford thought Barnet market was in better shape than for some years, having recently attracted a heritage cheese stall and a bread and cakes stall, in addition to the fruit and vegetable stalls run by the Bone and Gardiner families and Lenny’s meat stall.Attracting specialist suppliers, such a stall selling artisan cheeses, did make a difference said Ms Linford, author of Great British Cheeses, the first illustrated guide to British cheeses.

Because of the success of Young’s Fish stalls at markets across Essex, several traders urged them to give Barnet a try. 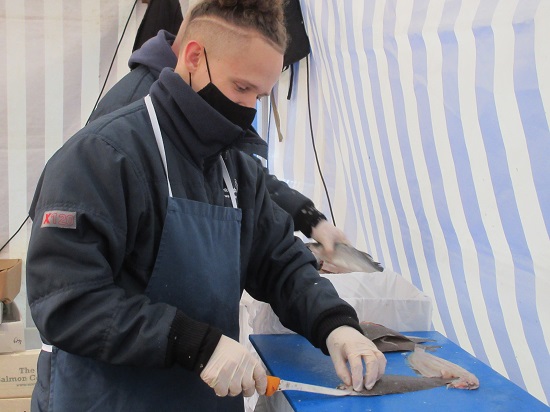 “We are really pleased we came,” said James Young, who was busy perfecting the trick of pulling the tough skin off Dover sole, a task that was previously the task of his colleague on the stall, Andy Stannard.
“I have been trying hard to get it right – and I really have been busy because we have been selling small Dover soles caught by a day boat off Suffolk. At three for £10 they are a real bargain.”

Young’s Fish makes three visits a week to Billingsgate Market in London and sources other supplies from around the country – skate and octopus from Devon, haddock, cod and plaice from Scotland, and shellfish from Cromer and other small ports.
“We can safely say that after just five weeks Barnet is definitely the nicest market we’re currently trading at. Everyone is so friendly and instead of just wanting to know the price of what we sell, as happens at our other stalls, customers here want to know all about the fish and where it came from.”