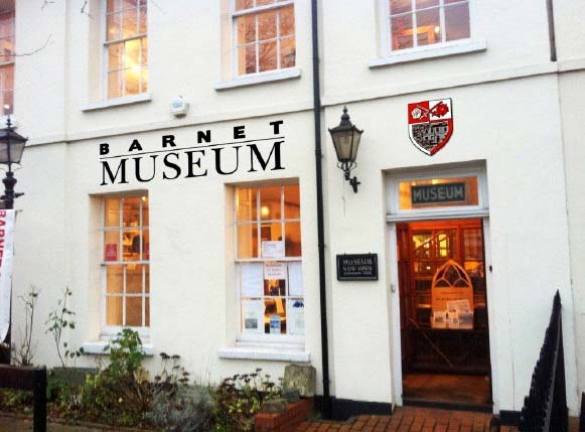 Barnet Museum has been fighting for its life since December 2010 when the Council announced that it would be withdrawing its funding.

The Museum is managed by Barnet & District Local History Society and run entirely by volunteers.

As part of its budget review/cost saving, the Council consulted the public over the future of the Museum and resolved to stop funding it from April 2011.  The other Council-funded Museum in the Borough is Church Farmhouse which has now closed and the building is for sale.

Support from visitors, petitions, blogs, press coverage and legal advice seem to have convinced the Council of the importance of keeping Barnet Museum in Barnet Town. The Barnet Society is fully supporting the Museum, campaigning to retain it, lobbying and writing letters. Our Chair has been invited to become a Trustee.

...negotiations with the Council continue at snail’s pace.

Whilst the Museum has already said that it is prepared to cover the running costs, it cannot afford to pay the full market rent suggested by the Council.  Although it has been agreed in principle that the Museum should stay on in its present building, negotiations with the Council continue at snail’s pace.

The Museum was set up to house the growing collection of the Barnet & District Local History Society and in 1938 Barnet UDC and Hertfordshire CC provided the building at 31 Wood Street as its home. Since then the collection of local records and artefacts has grown and the Museum is a highly valued resource, used by all ages in our community.