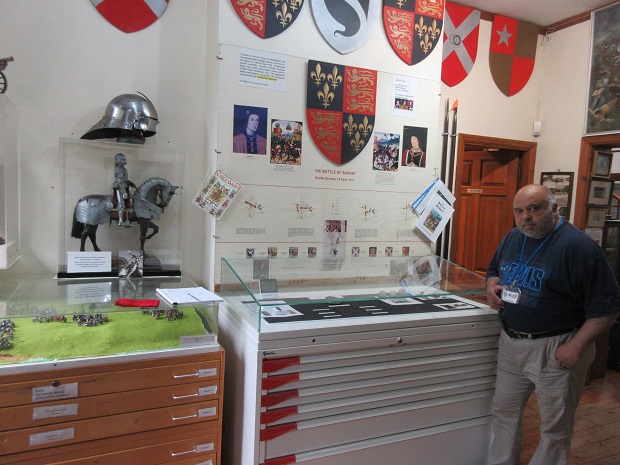 A display of medieval archery will be part of the re-enactment of the Battle of Barnet – one of the highlights of the two-day festival, to be held on Saturday and Sunday, September 11-12, at the Byng Road playing fields.

The arrowheads have been hidden away in a storeroom for most of the time since they were donated to the British Museum in 1851.

Exhibiting them in the lead-up to the medieval festival has delighted Barnet Museum curator Mike Noronha, seen here in front of a newly installed temperature and humidity-controlled cabinet.

Tickets are already available online for the medieval festival – the largest battlefield re-enactment in Greater London – and will also be on sale in shops along the High Street. 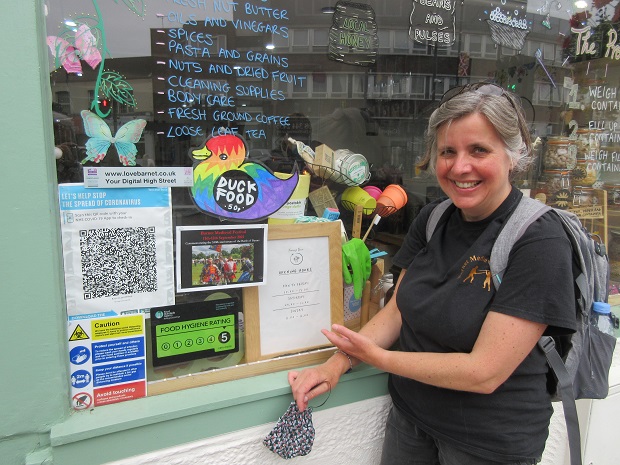 Shopkeepers in the High Street – which is decked out in the medieval banners of combatants at the battle – are being encouraged to put up notices and posters to promote the festival.

The re-opening of the museum following the easing of social distancing – and the chance to examine the new Battle of Barnet display – could hardly be timelier with the medieval festival returning in September after its cancellation last year because of the Covid-19 pandemic.

The first-ever local display of the six arrowheads – on loan from the British Museum for the next three years – came about only by chance and the technical data about their origin and condition will fascinate battlefield historians.

Their existence in the British Museum’s storeroom only became apparent by chance to members of the Barnet Battlefield Project when one of its founder members Howard Simmons visited the Natural History Museum in Ottawa in 2016.

When Mr Simmons toured their topical exhibition – Medieval Europe: Power and the Legacy – he was amazed to see that the Battle of Barnet was illustrated in the medieval warfare section with six arrowheads from the 1471 Battle of Barnet and the seal of Earl of Warwick, the Kingmaker.

This was the first time Mr Simmons of the Battlefields Trust had seen these artefacts, which were on loan from the British Museum.

He realised immediately that their existence had great significance in view of the efforts that were being made to locate the precise site of the Barnet battlefield.

It took three years to negotiate an agreement with the British Museum to display these artefacts in Barnet – and the sealed display cabinet can only be opened in the presence of British Museum staff.

Little is known about the actual discovery of the arrowheads within the battlefield site. They were given to the British Museum by an unknown donor in 1851 and they had remained in the storeroom until taken to Canada. 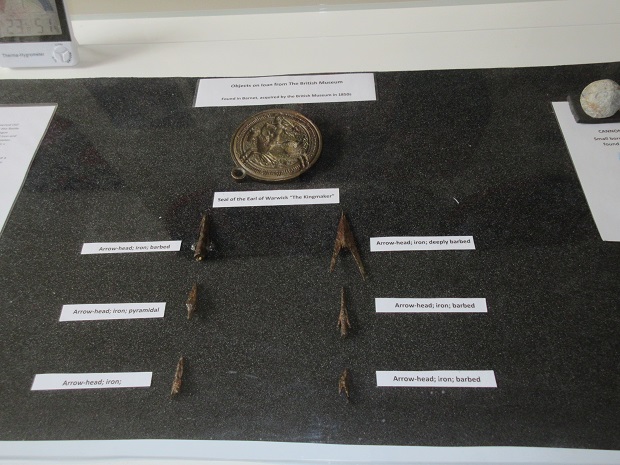 Although quite fragile, the iron arrowheads still have the marks of the blacksmith who forged them and fragments of wood from the arrow shafts are embedded in them. They would have been fired from either the Lancastrian or Yorkist side.

The death at Barnet of Richard Neville, the Earl of Warwick, was the most significant outcome of the battle and his demise enabled Edward IV to move the remaining Lancastrian forces to the Battle of Tewkesbury on May 4, 1471.

His seal would have been attached to a belt or worn round the neck and historians believe that one of the last times it could have been used was to seal the famous letter from Warwick to Henry Vernon in April 1471 exhorting him to fight for the Lancastrians against the Yorkists.

The seal was donated to the British Library, forerunner of the British Museum, in 1774 by Mrs Victoria Kynaston whose husband was an ancestor of Sir Roger Kynaston (1430-1495) who served in the House of York.

Kynaston, who took the seal from the Earl of Warwick as he lay dead in the closing stages of the battle, went on to fight in the Battle of Tewkesbury when he was knighted by Edward IV.

In addition to the six iron arrowheads and seal, the museum’s new display also includes a copper alloy strap end from a belt which was recovered from a test pit in Wrotham Park during the 2016 Battle of Barnet excavation. It is inscribed with the wheel of St Catherine.

Alongside the arrowheads are three golf ball sized lead cannon balls recovered almost 20 years ago from the Kitts End area at Hadley by Darren Wright and a groat from 1467-68 from the first reign of Edward IV which was discovered at Wrotham Park. 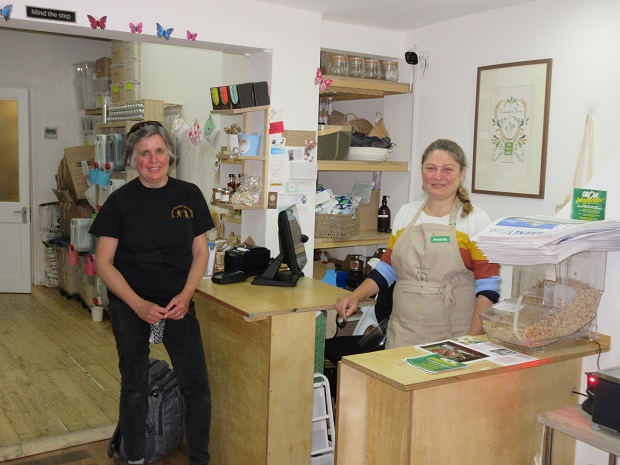 Tickets for the festival are going on sale at Kronos and Rhea (Susan Skedd is seen here with the proprietor Amanda Theodorou) and also at the traditional sweet shop Hopscotch.