Neighbourhood police officers anxious to strengthen contact with the community 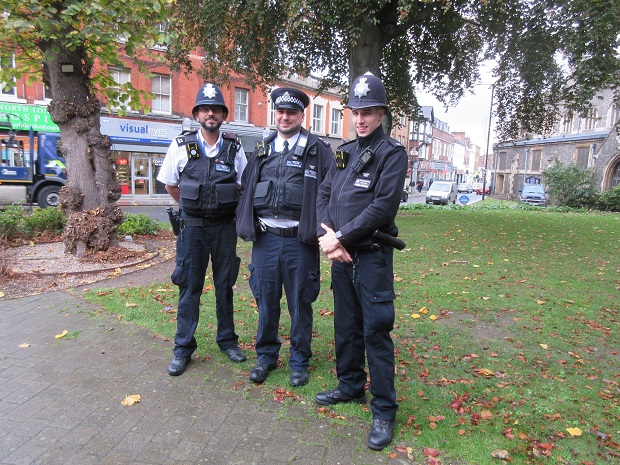 One of the top priorities for High Barnet's dedicated team of police officers -- the Safer Neighbourhood Team -- is to respond to complaints about anti-social behaviour in the High Street including begging on the pavement and disturbances involving rowdy youngsters.

Another focus is to tackle problems caused by drug dealing in and around Leicester Road, New Barnet.

Over the winter months there is to be a renewed drive to try to reduce burglary offences with advice for homeowners on crime prevention.

After having had to curtail face to face meetings with local residents due to the restrictions imposed by the Covid.19 pandemic, the team is keen to strengthen contact with the community and monthly getting-to-know-you sessions have resumed.

Sergeant Kevin Rudge (centre) and two police constables, PC Umar Fida (left) and PC Ben Knight, are anxious to restore the pre-pandemic level of contact with residents across the High Barnet ward which is the area north and east of Wood Street and Station Road, New Barnet.

A separate Underhill Ward Safer Neighbourhood Team led by Sergeant Anthony Toporowsky is responsible for the area south of Wood Street, which includes Barnet Hospital and Barnet and Southgate College.

Sgt Rudge said the High Barnet team, which also includes Police Community Support Officer Rick Celeste, were encouraged by the interest shown by shoppers and residents when they held a contact point meeting in The Spires earlier this autumn.

After hosting their November session at Theo’s café and grill in Plantagenet Road, New Barnet (Saturday 6 November, 2.30pm to 4 pm), there will be another contact point session in or close to the town centre in December.

At present the two ward teams are based in Barnet Police Station but the future location of their base will depend on what happens to the Metropolitan Police building in the High Street which is to close completely and is due to be sold off on the instructions of the Mayor of London, Sadiq Kahn.

Front counter services at High Barnet were withdrawn in December 2017 when Colindale Police Station in Graham Way became the one 24-hour, seven-day-a-week station for the whole of the London Borough of Barnet.

Theresa Villiers, MP for Chipping Barnet, has appealed to the Mayor to drop his plans to relocate the Safer Neighbourhood Teams to Colindale and instead to rent one of the empty shops in her constituency so that the ward police officers would have a base within Chipping Barnet.

Regular discussions about the work of the High Barnet and Underhill Safer Neighbourhood Teams are organised by a Community Action Plan committee for each ward.

Representatives of local organisations attend the meetings and hear directly from ward police officers about the action being taken to tackle issues causing concern.

These meetings advise on priority issues for the team and the three to be tackled in the High Barnet Ward between this November and February next year are reducing anti-social behaviour in and around the High Street and Leicester Road and reducing burglaries.

Sergeant Rudge said his team aimed to ensure that any householder who had been burgled would get a home visit the following day, or as soon as possible, followed by a visit by a crime prevention officer.

His team have noticed a welcome reduction in anti-social drinking of alcohol in the High Street and other public spaces around the town centre.

A ban on street drinking was introduced by Barnet Council in November 2019 under the High Barnet Public Spaces Protection Order following complaints about drunken and rowdy behaviour in Church Passage, the rear of The Spires shopping centre, Ravenscroft Park, and other trouble spots.

Officers work a mixture of day and evening shifts, both during weekdays and weekends, and they are happy for residents to engage in conversation while they are out on patrol.

Residents and business owners can keep up to date with local crime alerts by becoming a member of Online Watch Link, on which the Metropolitan Police in partnership with neighbourhood watch coordinators communicate with the community.

Messages and crime alerts are sent out by email, telephone, SMS, or fax after registering at https://www.owl.co.uk/net/

If anyone would like to attend Community Action Plan meetings – and the next meeting is online at 7pm on Thursday 17 February 2022 – they should make contact via email: