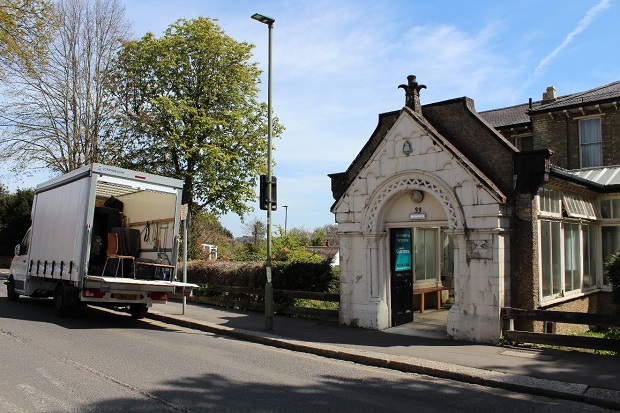 The future of 33 Lyonsdown Road New Barnet hangs in the balance as the last the property guardians have left the villa. This locally listed building has been threatened with demolition by its owners, Abbeytown Ltd, who unsuccessfully applied to build a five-storey block of flats on the site.

Local councillors robustly defended the heritage value of this landmark building in New Barnet by unanimously voting down the planning application in February 2021.

Removal vans had to line up outside 33 Lyonsdown Road as property guardians vacate the building on Monday 26 April.

Local residents have expressed concern and anger that this fine Victorian villa was still at risk and vulnerable to intrusion and vandalism. Neighbour Michelle Mandak fears that the owners will persist with their intention of demolishing it and has commented ‘Surely a historical building cannot be pulled down just to serve someone's greedy thirst for profit?’.

The case has generated more national coverage, this time in Private Eye (No. 1545, 16-29 April 2021, p.23). Piloti – the anonymous author of the regular column on architecture and heritage – added their support to the campaign to protect the building: 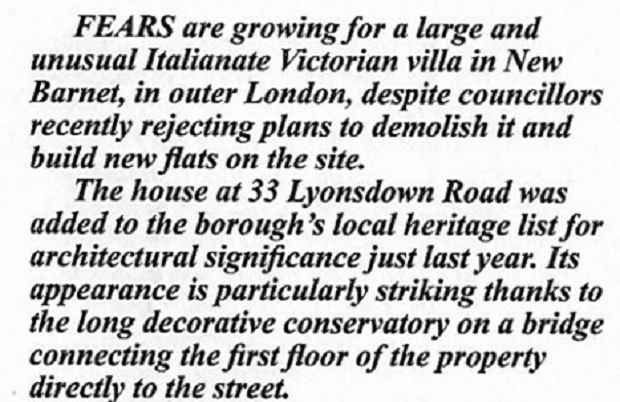 The opening paragraphs of the article by Piloti in Private Eye

Local residents and heritage campaigners are at a loss to understand why no consideration has been given to converting and re-using the building, which the planning committee recommended. This would be consistent with Barnet’s Local Plan which states that ‘there will be a presumption in favour of retaining all 1,600 Locally Listed Buildings in Barnet’ (Policy DM06). SAVE Britain’s Heritage has challenged the ‘needless demolition’ and questioned why there was ‘no case for re-use’ in the planning application. The Victorian Society has agreed, commenting that ‘the demolition of this building would not only be wasteful, but also irresponsible to the effort to tackle climate change’.

Re-use of the historic building would be in line with the environmental agenda which is gathering pace in the planning and heritage sectors. The Royal Institute of British Architects (RIBA) and Historic England (HE) are promoting the re-use of existing buildings in order to cut the UK’s emissions, given that demolition and redevelopment are more costly in carbon and energy terms. RIBA has been championing re-use in its Retrofit First campaign since 2019 and has stated unequivocally that  ‘it is essential that we think reuse first, new build second’.

Historic England has published evidence to show that ‘compared to refurbishing a traditional Victorian terrace, a new building of the same size produces up to thirteen times more embodied carbon’. It has concluded that ‘to meet the government’s target of being carbon neutral by 2050, we must recycle, reuse and responsibly adapt our existing historic buildings’. As reported here, there is a proposal to save 33 Lyonsdown Road for arts and community use which is being developed by musician and former guardian Ilana Lorraine, whose new single, Reason Why, is released today. 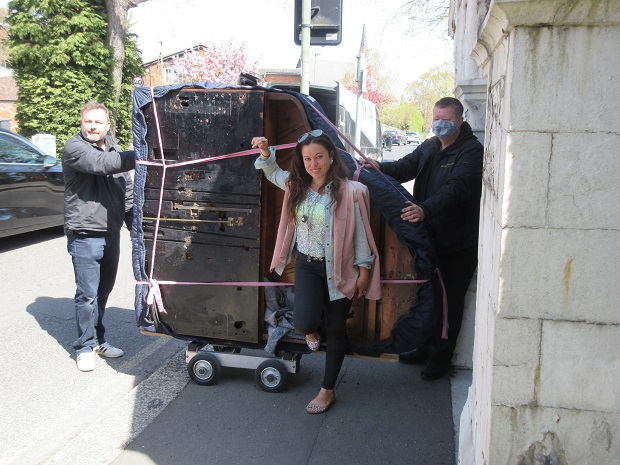 At the last minute Ilana Lorraine managed to retrieve her grand piano after finding a temporary home for it in a Tottenham warehouse.  Piano Movers Ltd of Borehamwood came to her rescue and Chris Armstrong (left) and Arron Lampard wheeled it out before the resident guardians handed back the keys.

Abbeytown Ltd – which bought 33 Lyonsdown Road for £1.8 million in 2015 – is considering appealing against the rejection of its plans. Its apparent unwillingness to engage with the environmental cost of its redevelopment option is at odds with the mission statement on the company website. This points to a track record in ‘sympathetically refurbishing or converting run down properties to provide luxury houses and apartments’ and ‘with emphasis given to eco-friendly design’. They cite dry rot and structural movement d as the justification for demolition of 33 Lyonsdown Road, even though historic buildings with these kinds of problems are repaired all the time.

The Barnet Society is calling on Barnet Council to act to protect this fine Victorian villa and engage with its owners to develop a plan for its sensitive re-use. It has the power to issue an Article 4 direction which would reinstate the requirement for planning permission for demolition of a locally listed building. Meanwhile, the Council is currently asking residents to submit new nominations for the Local Heritage List (closing date 30th April 2021). There seems little point in this exercise unless the Council is ready to back up its decision to locally list 33 Lyonsdown Road.

Robert Jenrick, Secretary of State for Communities, Housing and Local Government, when announcing the government campaign to encourage more local listings in October 2019, made clear that this initiative ‘will empower local people to protect thousands of historic buildings and preserve them for generations. Getting more buildings listed isn’t just about keeping a building intact – it keeps a community’s identity thriving’. Surely Barnet Council needs to fulfil its side of the bargain and start protecting those buildings already listed.

The planning battle to save 33 Lyonsdown Road has generated considerable interest locally and also gathered momentum nationally thanks to support from SAVE Britain’s Heritage and The Victorian Society. This demonstrates that it is not just a little local matter to be swept under the carpet but goes to the heart of who gets to decide what makes a community. Is it the council, is it the local residents or is it the property developer who wants to throw away a venerable building for yet another block of flats?